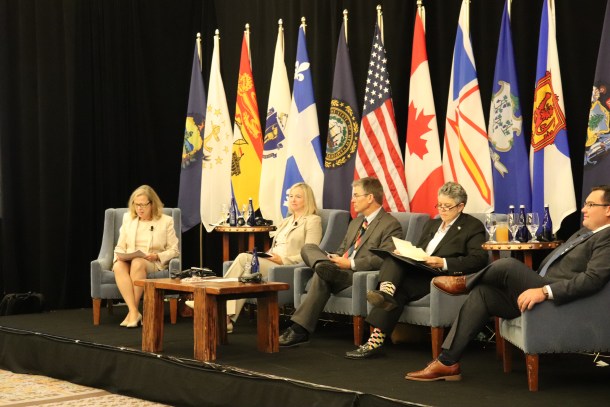 Panelists at a conference in Stowe on Monday discussed the need for electric vehicles to meet greenhouse gas reduction targets. Photo by Elizabeth Gribkoff/VTDigger.

Geoff MacLellan, a legislator in Nova Scotia, said during the closing remarks of the annual meeting of the governors and premiers in Stowe that cross-border cooperation on energy issues “is important for our economic prosperity and for the security of our citizens.” Hydro-Quebec has provided New England with a large portion of its renewable electricity, an arrangement leaders do not want to see jeopardized by the ongoing trade dispute between the U.S. and Canada.

However, regional energy security was not discussed in depth during the conference. The focus, instead, was on how leaders can set policies to encourage residents and businesses to wean off of fossil fuels, particularly for automobiles.

“Range anxiety” -- or drivers’ fear that electric vehicles will leave them stranded when they run out of “juice” -- was brought up as a common concern why drivers accustomed to a prevalence of gas stations are reluctant to relinquish their gas or diesel vehicles.

“I really do believe that if people saw more places where they could charge one of these vehicles that they would worry less about whether or not they would end up some place without a charge,” said Gov. Charlie Baker of Massachusetts.

However, most people charge at home or at work, not at public stations, according to John Gillbrook, sales director for Chargepoint. June Tierney, commissioner of the Department of Public Service noted that a Vermonter’s average commute was “significantly less” than the range of a Nissan Leaf and that home charging would suffice for regular car trips.

But a “corridor” of charging stations would assuage the fears of tourists and other long distance drivers, panelists and political leaders concluded. Gov. Phi Scott reiterated his pledge to install more charging stations in Vermont to accommodate tourists from Quebec, which has started offering incentives for electric vehicles.

“Not only can they come to see Smuggler’s Notch, but they can do it without using any gas to get over the hill,” said Prince Edward Island Premier Wade MacLauchlan of Canadian tourists coming to Vermont.

David Farnsworth of Regulatory Assistance Project added that electric vehicle promoters still “need to crack the multi-family issue” to ensure that apartment residents can charge where they live.

Purchase incentives were touched upon as a way to make electric vehicles more accessible for lower-income people. Gillbrook noted that although lifetime maintenance and fuel costs were lower for electric vehicles, the initial higher upfront cost could be a deal breaker. “Most people, I would argue, don’t go through the trouble of calculating the total cost of ownership.”

When Reed, president of utility company National Grid Massachusetts, noted that her company was providing $5,000 for employees who bought an electric vehicle to “walk the talk,” Baker expressed concern that the beneficiaries of purchase incentives were “for the most part at the higher end of the spectrum.” Reed responded that shareholders, not ratepayers, were footing the bill for the incentive program.

Gov. Phil Scott mentioned electric vehicle leasing programs as a way to encourage the switch for drivers who are reluctant or can’t afford to invest in an electric vehicle.

One point of discussion was whether the grid could handle an increase in electric usage from an influx in electric vehicles. Tierney noted that Vermont’s grid operates at around 40 percent of its capacity outside of peak times. Charging electric vehicles overnight could help flatten the demand on the grid -- a goal for grid managers. Utilities like Green Mountain Power offer lower rates during off peak hours to encourage overnight charging.

Panelists also expressed a need for better integration of batteries onto the grid as more solar panels and wind turbines come on line. Lack of energy storage — called the “holy grail” by Sue Gander, director of environment, energy and transportation for the National Governors Association -- has put a ceiling on how much energy the region can generate from intermittent renewable sources.

In Vermont, the state has made recent commitments to promote electric vehicle ownership, including directing VW settlement funds to an electric school bus pilot program and rollout of additional charging stations. As required in a transportation bill last session, the Public Utilities Commission recently began an investigation into how the state can cost effectively break down barriers to electric vehicle ownership.

A handful of protestors flanked the entrance to the resort, carrying signs saying “Mega dams = mega damage.” They questioned the region’s progress on climate change commitments and renewable energy. However, MacLauchlan noted that New England and eastern Canada led the charge on regional commitments to climate change by setting greenhouse gas emissions reductions goals in 2001. The targets were updated in 2015 to call for a 35-45 percent reduction in the next fifteen years, he said. 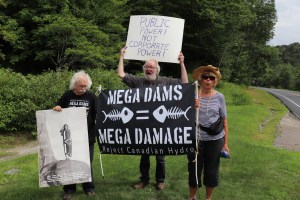 Protesters outside a conference of New England governors and eastern Canadian premiers. Photo by Elizabeth Gribkoff/VTDigger.

The leaders signed a resolution on Monday affirming their commitment to affordable clean power and cross-border energy security.

Sandra Levine from Conservation Law Foundation expressed disappointment over the lack of a firm plan for regional collaboration on climate change “at a time when Vermont’s greenhouse gases are rising.”

“With the federal government inaction, it’s more important than ever that the states and the region take bold and responsible action on climate change,” she said.

Thanks for reporting an error with the story, "Governors and premiers promote electric vehicle revolution"