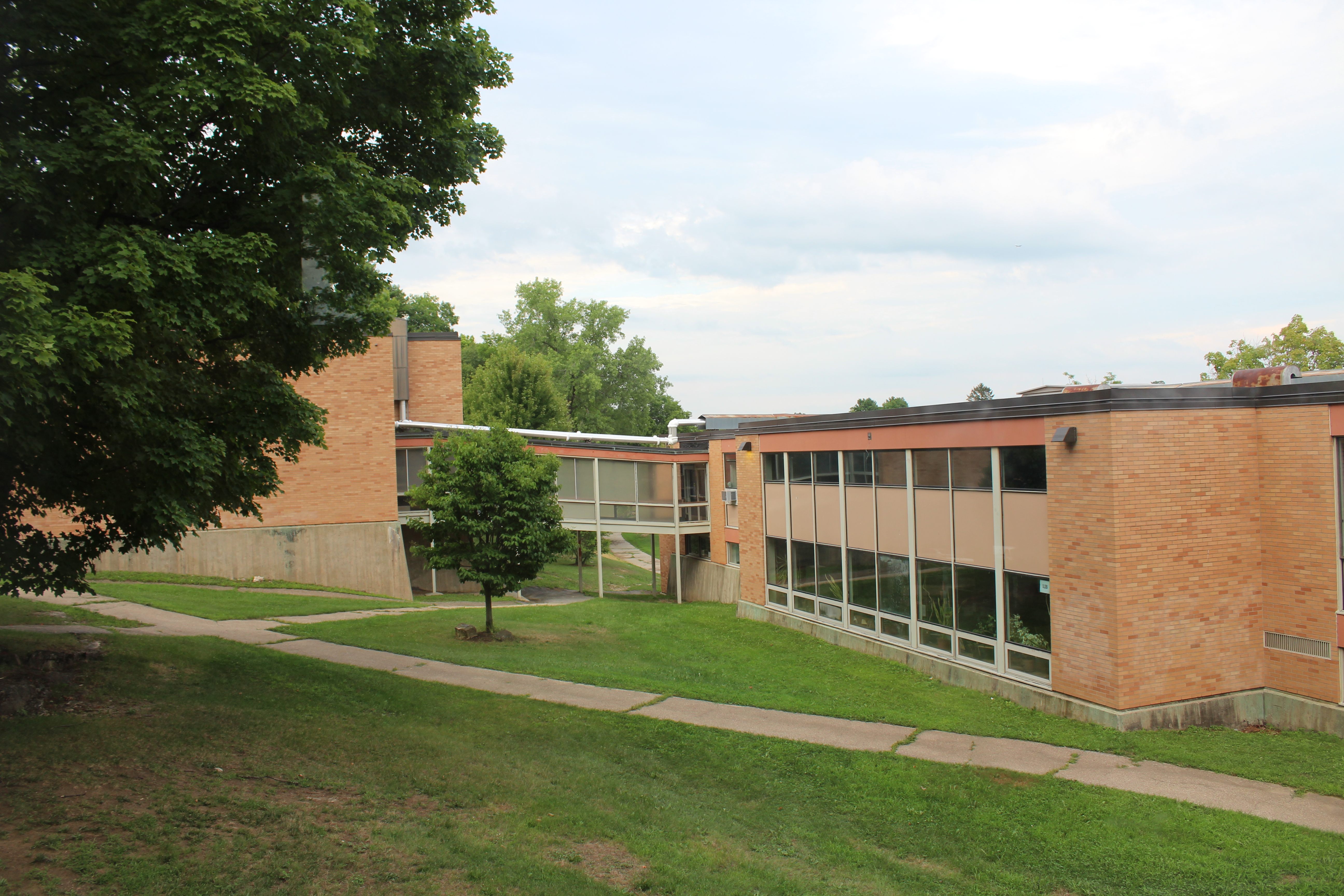 [B]urlington High School’s campus stands as a relic of the past. Considered state-of-the-art when it first opened its doors in 1964, the structure is now viewed as a piece of aging infrastructure, the result of years of deferred maintenance.

Burlington community members have been talking of ways to address problems at the high school for years, and finally have a plan that aims to receive the support of voters this fall.

The Burlington School Board will consider a bond amount on Tuesday towards a $60 million to $70 million major renovation. Plans call for demolishing several buildings, and constructing a three-story expansion on the main portion of the high school.

The board is expected to consider three bond amounts during its meeting, according to district officials. The tax implications of all options will also be presented.

The city’s high school is situated on its fourth campus, and was constructed by local architecture firm Freeman, French and Freeman, after moving from the Edmunds School in downtown Burlington. 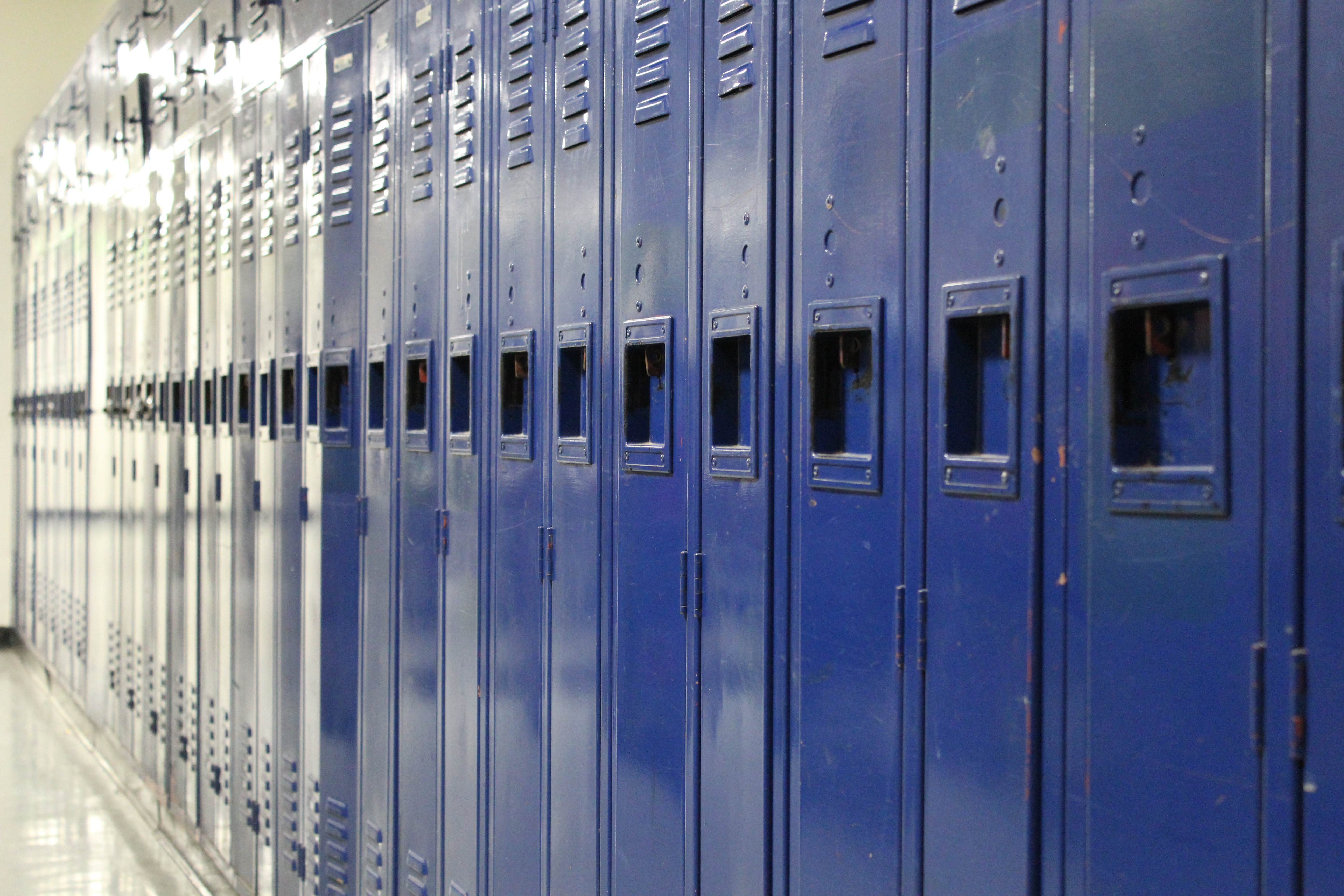 The high school's lockers are too small for backpacks and coats, and most students opt to carry their belongings throughout the day. With six buildings on campus, they can also be inconvenient to access. Photo by Alexandre Silberman/VTDigger

The district is currently working with Black River Design, a Montpelier-based architectural firm that has handled similar projects at other Vermont high schools.

The once modern high school has fallen into disrepair after more than a half century of use. Most of the building materials are original, including lockers and flooring. Inefficient unit-ventilator heating leaves one side of a classroom hotter the other. Plexiglass-enclosed ramps connect the maze-like cluster of six buildings.

Plumbing, heating and electrical systems are out of date, with much of it dating back to the 1960s. 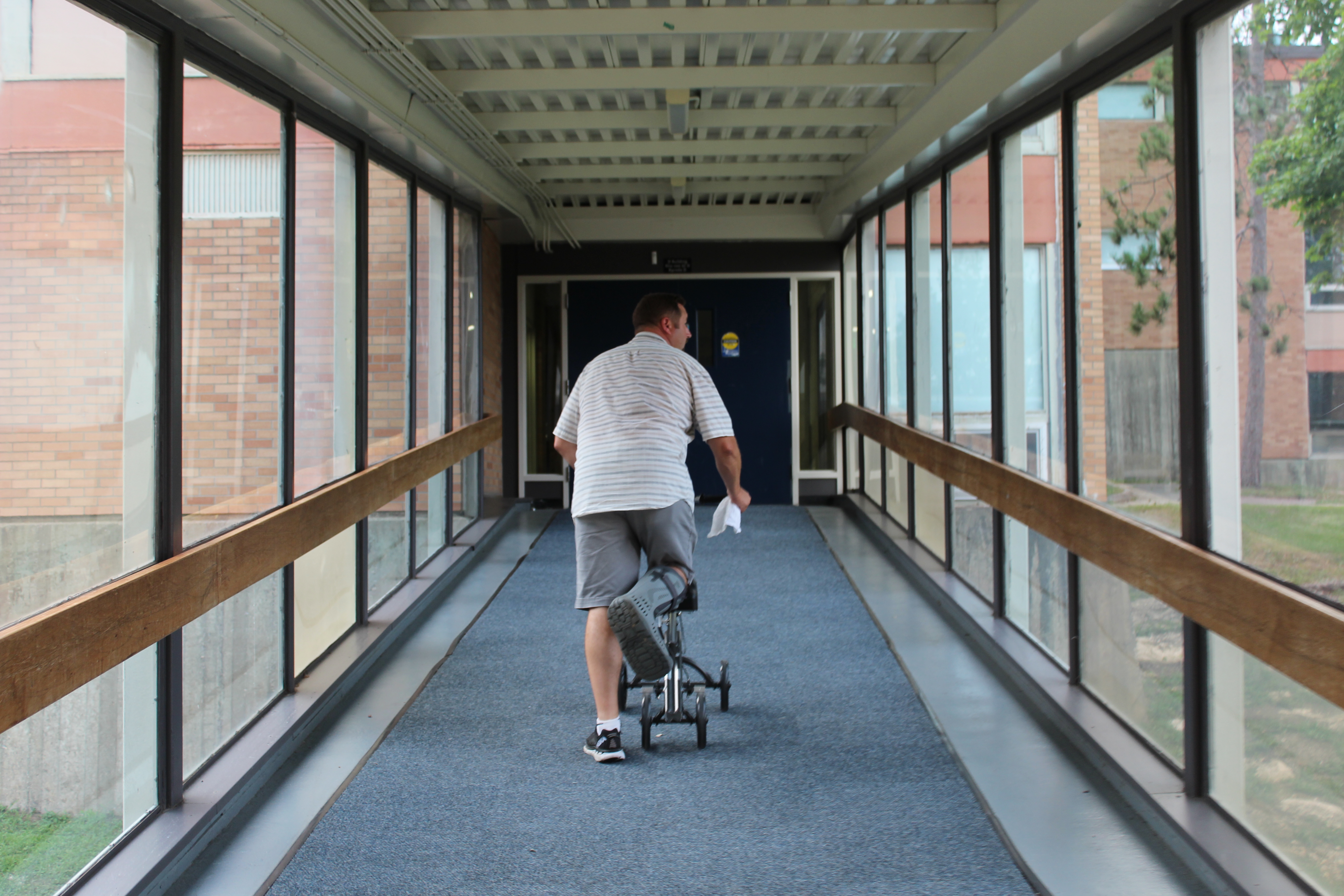 Outside plexiglass walkways, such as this one used by tour leader Marty Spaulding, currently connect the six building's on campus at Burlington High School. Photo by Alexandre Silberman/VTDigger

Accessibility challenges on the hillside campus are another driver of the proposal. Though no building exceeds three stories in height, the highest and lowest buildings, “A” and “E” are seven stories apart. 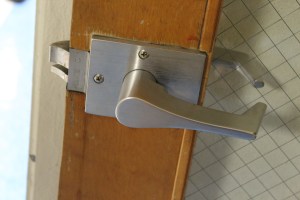 Classroom doors can only be locked from the outside, which would require a teacher to enter the hallway if a security situation occurred. Photo by Alexandre Silberman/VTDigger

Students with mobility challenges currently navigate the high school using long, winding routes and take outside paths to get to class on time. The campus has four elevators, none of which is up to code under the American with Disabilities Act (ADA), and would require seven to make its current configuration work.

A quarter of hallway doors don’t have a handicap access button, and when students with mobility issues want to enter the auditorium without taking stairs, the easiest way is through a door outside near the parking lot.

The district has been holding tours of the property, led by Property Services Manager Marty Spaulding. He broke his leg in May, and wheels around on a knee-walker-style scooter.

Spaulding has seen firsthand the challenges of navigating the complex without stairs. On Wednesday’s tour, he periodically left the group to take a longer, more accessible path to the same destination.

What are the plans?

A group of stakeholders began a three-year process of soliciting input in 2013. District Superintendent Yaw Obeng formed the citizen-based Burlington High School ReEnvisioning Committee in May 2017.

The school board accepted the committee’s recommendation of renovation and expansion, with a partial demolition in April.

Plans show a large expansion of the high school’s main building, including an improved facade. The images below show how the changes might affect the front of the campus — use the slider to toggle between the current and proposed designs.

ReEnvisioning Committee members considered the option of building an entirely new building on the current baseball field, but decided to focus on renovations after concerns over a projected cost of more than $100 million, proximity to North Avenue and stability of the ground.

The wrap-around design plan for “A” Building, which holds the auditorium, gymnasium, cafeteria, music rooms and other classrooms is the proposal on the table. The district would improve access to “B” Building, which currently holds foreign language and art classes, and would demolish “C” Building and “D” Building. 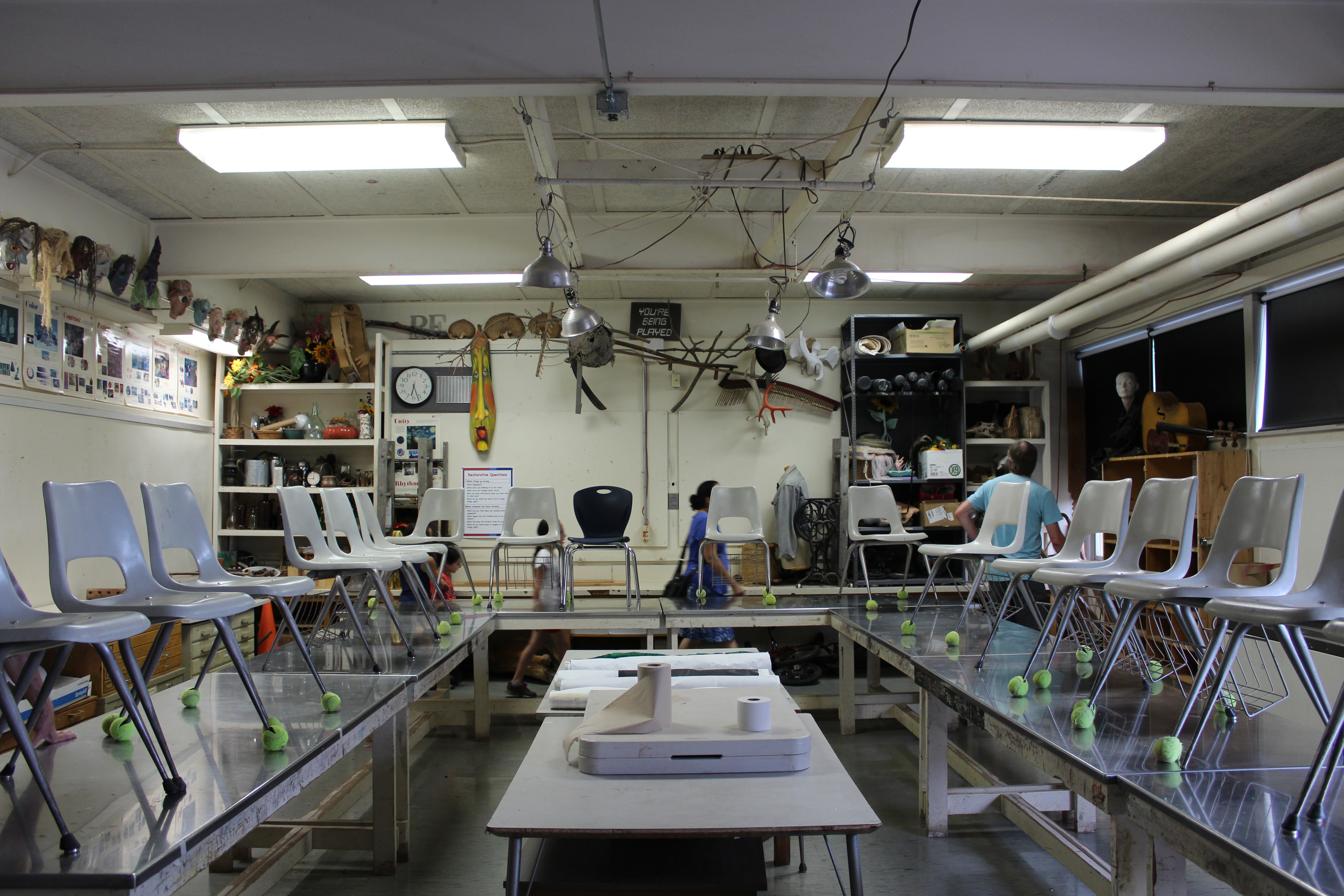 The math and science section, “E” Building, would be demolished or refurbished for an alternative use.

The interactive map below details the proposal and current layout of the campus at Burlington High School. Click on the colored buildings, markers and zones to see photos and learn more about the plans.

If the Burlington School Board approves a bond amount on Tuesday, that proposal would advance to the City Council for consideration.

Some councilors, including Jane Knodell, P-Central District, and council President Kurt Wright, R-Ward 4, have expressed concerns around the timeline of the project.

Knodell said on Friday that she believes there are a number of questions that should be answered before placing a bond on the ballot. She said she would like to see the district examine other means of alternative financing other than entirely from the pockets of taxpayers, and wants more time for public engagement.

“Here we are in the middle of August, essentially two weeks out from the district coming to the council, and the project still has to be defined,” Knodell said. 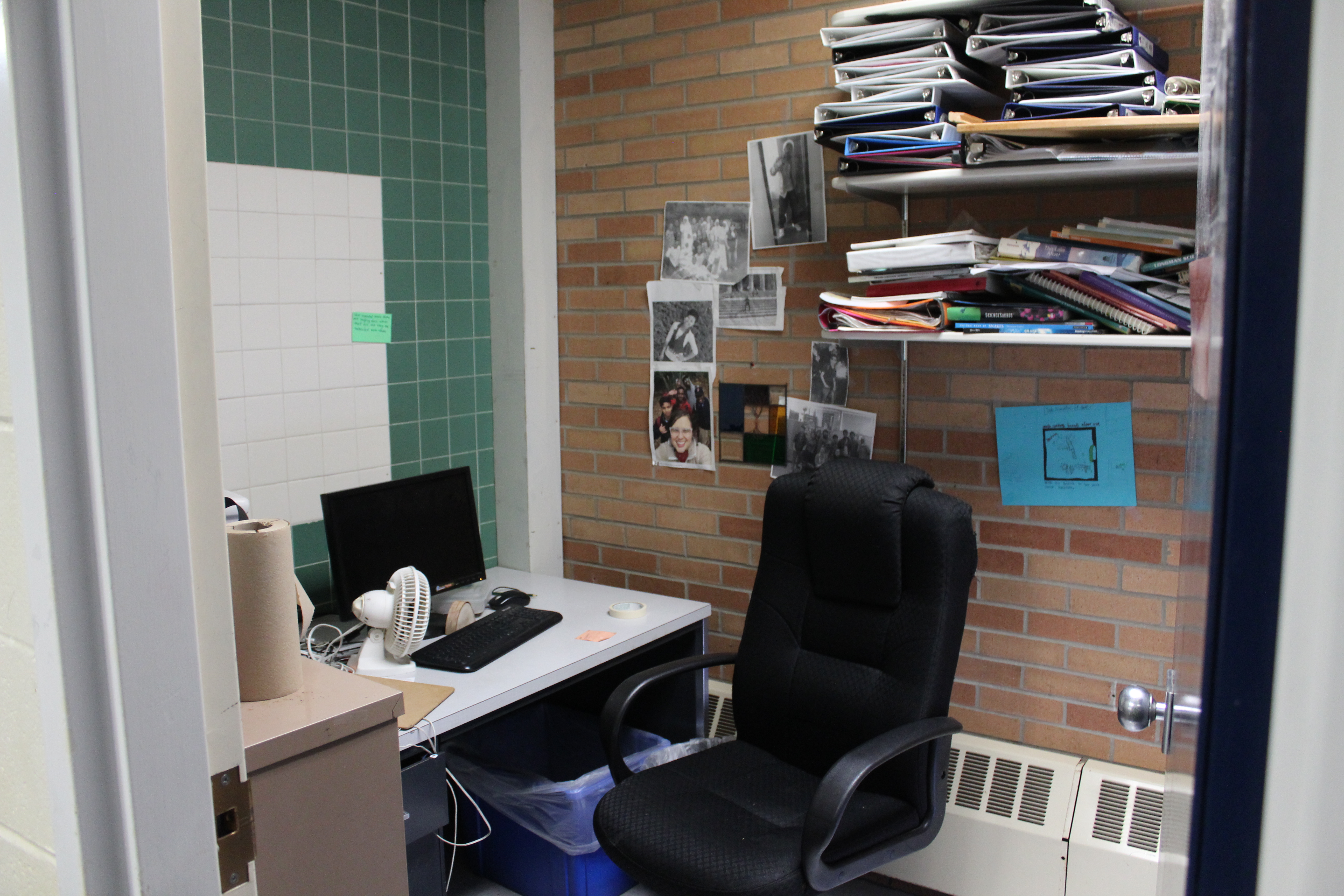 Cramped offices have been tucked into former storage spaces at the current high school. Photo by Alexandre Silberman/VTDigger

Councilors were informed about the push for a ballot item during a meeting with school board members in July. Several were present for Wednesday’s tour.

Other bond proposals in the works could impede the district’s request. The city is currently preparing to ask taxpayers for funds to stop wastewater treatment discharge into Lake Champlain and for renovating Memorial Auditorium.

“I feel it is a question of feeling which bond should be prioritized,” Knodell said. “The lake is feeling like job one.”

If the bond proposal makes it onto the November ballot, this will be the Burlington School District’s second time before voters in two years. Taxpayers approved a $19 million bond in March 2017 to conduct maintenance at other schools.

The district has one public high school tour remaining, scheduled for Aug. 18. Those interested can sign up here. 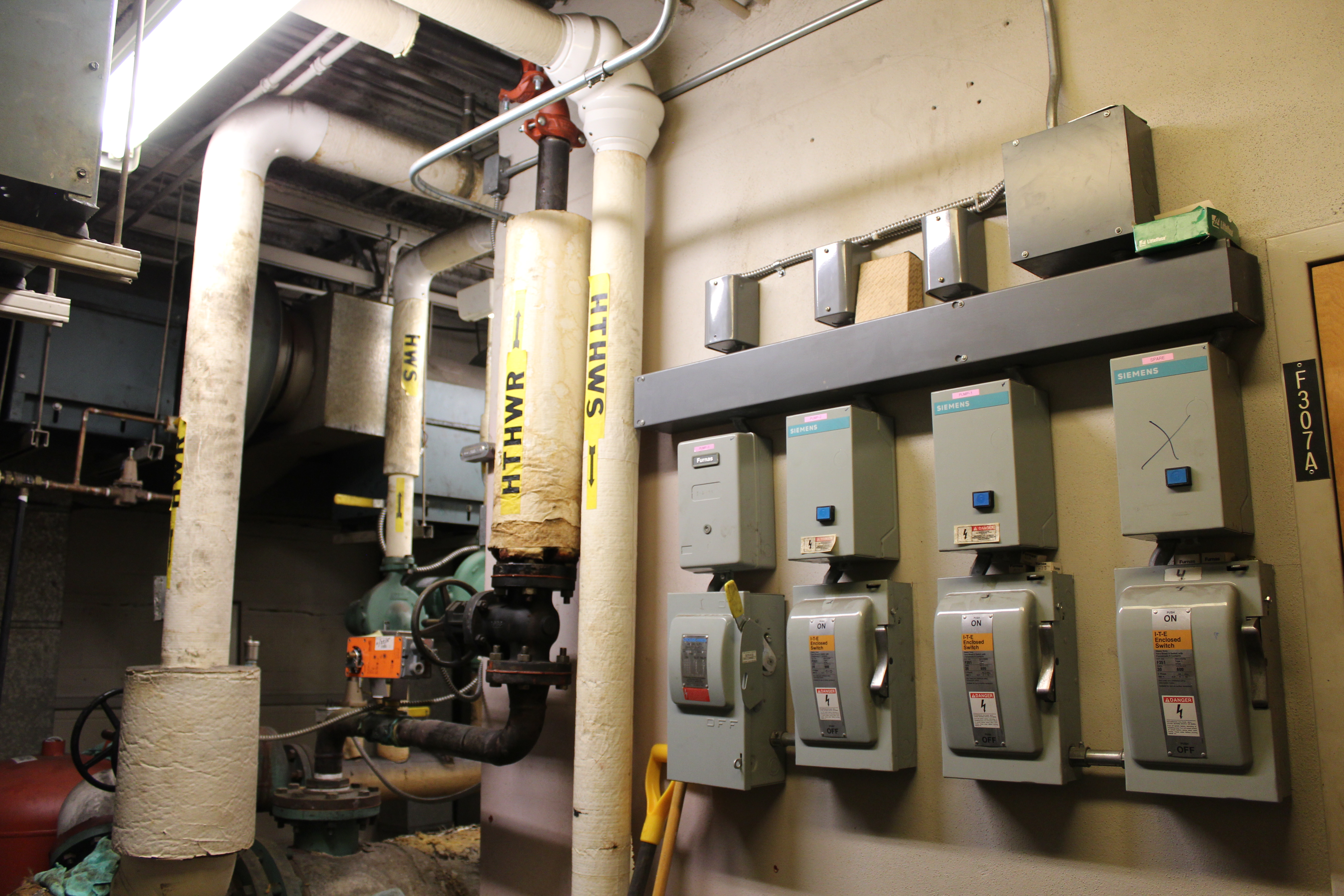 Much of the high school's heating and electrical infrastructure dates back to the 1960s. Photo by Alexandre Silberman/VTDigger

Thanks for reporting an error with the story, "Major renovation bond proposed for Burlington High INTERACTIVE GRAPHI..."