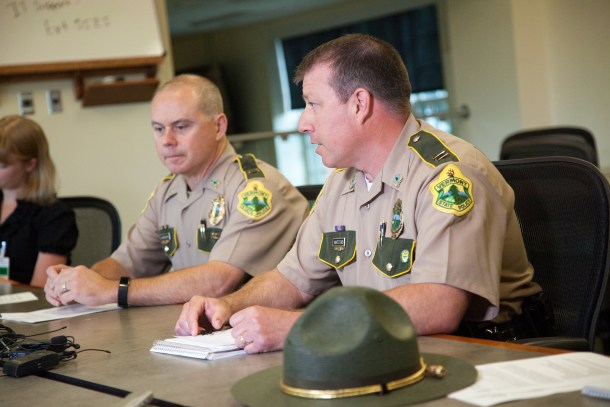 [W]ATERBURY – Vermont State Police used the terms “case-by-case basis” and “developing case law” in response to several enforcement scenarios that may come to light as a new law goes into effect in two weeks legalizing the possession of small amounts of marijuana.

A pair of state police commanders met with reporters Tuesday at the Department of Public Safety’s headquarters in Waterbury to talk about the impact of the law on the operations of the force, and a training document on the topic that’s been put together for troopers.

“The training bulletin for the Vermont State Police was developed to assist our troopers in understanding this new law,” said Capt. James Whitcomb, VSP’s staff operations commander. “We thought it was important to alert our troopers to the new changes in marijuana policies.”

That training bulletin will continuously be updated as court cases around the new marijuana policy play out, he added.

“We’re always going to learn and take new case law and apply that to assist our troopers,” Whitcomb said.

The 10-page training bulletin provided to troopers comes with some words of caution.

“The summary is not exhaustive and your decision in each circumstance may change depending on the facts,” an introduction on the first page states. “Thus, you must read the text of each of the relevant statutes and confer with your local prosecutor.”

So what if a trooper pulls over a vehicle and can see a marijuana joint in a cup holder?

“It’s a case-by-case basis,” Whitcomb said, adding it’s a matter where troopers would need to be working closely with prosecutors in each of the counties where such instances arise.

The training bulletin does state, “Unless the cultivation or possession is otherwise prohibited by law, treat as a civil landlord/tenant issue.”

The law also calls for an “enclosure that is screened from public view” when it comes to the cultivation of marijuana plants. Just what that enclosure and screening means is still not entirely clear. 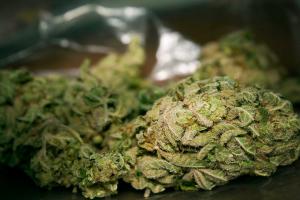 “I don’t recall seeing that it needed to be under lock key,” Whitcomb said. “I think this is a great example of where this law is going to be developed over time through case law.”

And how would state police ensure that edibles a person possesses contains less than an ounce of marijuana?

“The bulletin, like the law, doesn’t address all potential incidents, including edibles,” Whitcomb said. “These are incidents that troopers are going to encounter, we realize that … This is an area, again, where the trooper will be and have been directed to collaborate with our partners, the state’s attorneys.”

One thing that won’t change, according to both Whitcomb and Lt. John Flannigan, commander of the Vermont State Police’s safety programs, is that it still remains illegal to drive stoned.

“Driving impaired is illegal, nothing changes there,” Whitcomb said.

“It still remains impaired to the slightest degree,” Flannigan added of the law.

Asked if he expected to see the number of stoned drivers increase after July 1 with the legalization of the recreational use of marijuana, Flannigan replied, “We have to see what comes, and we have to be prepared to make changes.”

Troopers will continue to use the same process that is used now to investigate suspected stoned drivers, Flannigan said.

Indicators of impairment will be taken into account, including an officer’s observation of a motorist’s driving to that person’s performance on a field sobriety test. A Drug Recognition Expert, or DREs, would also be called in to assist if impairment due to drugs is suspected, Flannigan said.

And a warrant could also be sought to obtain a blood test of a driver, though the presence of marijuana alone would not be the only factor considered when deciding whether to arrest a motorist for driving impaired, he said.

Flannigan called the detection of marijuana in blood one more piece of evidence to add to a case to help prove in court that a driver was impaired behind the wheel.

“Just by itself, having a test that’s positive, without any other kind of evidence, isn’t a strong case,” Flannigan said.

In passing the law, the Legislature did not establish a “per se” limit of THC, the active ingredient in marijuana, a person can have in their system before being considered impaired.

Also, this legislative session, a bill to permit saliva testing as another tool for officers to determine whether a motorist is impaired failed to gain enough support to pass.

Flannigan said Tuesday that across Vermont there are about 50 Drug Recognition Experts, including members of the Vermont State Police and other law enforcement agencies. There are plans in place to boost that number by 10 with a new class starting training later this summer.

“We want to make sure those experts are available to our law enforcement partners around the state,” he said.

Flannigan did say that a trooper seeing a joint in the ashtray of a pulled-over vehicle could still prompt questions, even though possessing it for someone 21 or older would be legal.

“It’s going to be how that person presents as far as impairment goes,” Flannigan said of the stopped motorist.

There are other changes coming as the law takes effect.

Police canines are no longer being trained to hit on marijuana, Whitcomb said. And those already training to do that, he added, are being put to use on patrol with their handlers.

“They are going to be utilized in different roles,” he said of those marijuana-sniffing canines.

Thanks for reporting an error with the story, "Enforcement questions loom in Vermont as pot legalization nears"