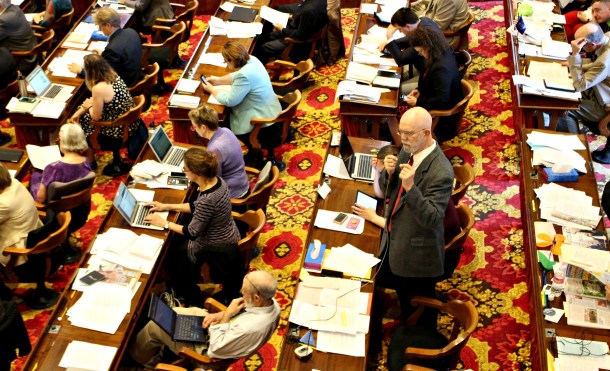 Rep. Bill Lippert, D-Hinesburg, introduces a drug import bill to the House of Representatives on Wednesday. Photo by Colin Meyn/VTDigger

[A] bill that would seek to lower prices of some widely used drugs by importing them Canada received nearly unanimous support in the House of Representatives on Wednesday.

S.175 will now be sent back to Senate to approve some relatively minor changes to the bill that passed unanimously in that chamber, before heading to the governor, whose position on the bill is unclear.

If it does get the governor’s signature, then it’s just getting started. At that point, the state Agency of Human Services would work with the National Academy for State Health Policy to create a plan to submit to federal agencies.

If those agencies approve the plan — and they have given strong signals that they will not — the proposal would return to the state Legislature again before it is put into action.

Rep. Bill Lippert, D-Hinesburg and chair of the House Health Care Committee, introduced the bill to the House floor on Wednesday, telling fellow lawmakers that it was no sure thing, but was a worthwhile effort. It passed 141-2.

Lippert said that with Utah, a predominantly Republican state, also pushing to create a state-operated drug import plan, there would be a bipartisan pressure in Washington, D.C., to move the idea forward. All three members of Vermont’s congressional delegation have been vocal supporters of the proposal.

Because NASHP has offered to fund the design of the template for the proposed system, there was no risk to trying, Lippert said, even if federal authorities did eventually decide to shoot down the plan, as they have suggested they will do.

“That could be, in which case it won’t have cost the state of Vermont money,” Lippert said. “It will be an attempt to move things forward.”

On average, Canada’s prescription drugs cost 30 percent less than in the United States. The proposed import scheme would identify drugs that are widely used in Vermont and much cheaper in Canada. The state would either set up its own wholesaler or partner with an existing company to import and distribute the drugs.

Four former FDA directors issued an open letter last year opposing the importation of drugs from Canada, though it focused on drugs purchased by individuals over the internet. They said it could “harm patients and consumers and compromise the carefully constructed system that guards the safety of our nation’s medical products.”

The pharmaceutical lobby testified against the bill being considered in Vermont, putting forward the same general arguments about consumer safety.

“It just puts us in a position in the future that may not leave us in the best light, knowing right now that it’s pretty much a long shot that they would ever give us permission to do it,” Gobeille said.

Among his concerns was the cost of the initial stage of designing the plan, which was estimated at $200,000 to $800,000. Any cost to the state is now pushed back until actual implementation, with the funding from NASHP.

The House also made changes to the bill passed by the Senate that may make it more palatable to the administration, such as clarifying that a fee will be imposed at a later date by the Legislature, rather than the administration.

The bill was not on a list of problematic legislation put out by the governor earlier in the session, but that list was not meant to be exhaustive.

The only House member to speak up against the bill on Wednesday was Rep. Robert Frenier, R-Chelsea, who said that it was “a waste of time and money.”

Frenier said that even if Vermont did get federal permission to move ahead with the plan, Canada almost certainly had no interest in being part of a deal that might undermine its own relationship with major drug manufacturers.

“I anticipate that we will be tilting at a windmill that is way bigger than tiny Vermont, and that someplace in the country north of us there will be an immediate movement to stop us from doing this,” he said.

Rep. George Till, D-Jericho, who reviewed the bill as a member of the House Ways and Means Committee, stood with Lippert in embracing the uncertainty of the bill.

“Our committee recognized the huge potential savings of this plan, but it’s also uncharted territory,” he said. “Nobody knows exactly what the implementation rules are going to be, and what it’s going to take.”

Clarification: A previous version of this story said former FDA commissioners issued a letter in opposition to the idea of states importing pharmaceuticals from Canada. The letter said they were against individuals importing drugs from Canada via the internet.

Thanks for reporting an error with the story, "Drug import bill takes a big step forward, but many more ahead"