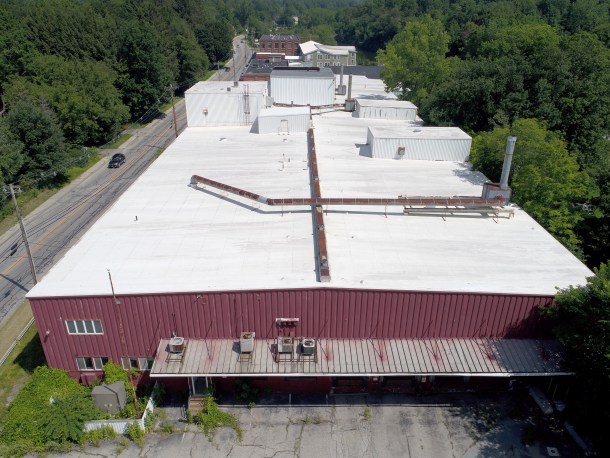 The former ChemFab plant in North Bennington is considered by state officials to be the source of PFOA contamination of groundwater supplies in a wide area around the factory. File photo by Ben Garver/Berkshire Eagle

[T]he Senate Appropriations Committee has approved funding for the further extension of public water lines to Bennington residents whose wells were found to be contaminated with the toxic pollutant and known carcinogen perfluorooctanoic acid, or PFOA.

Sen. Dick Sears, D-Bennington, said Wednesday that the $750,000 approved will cover design work to extend water lines to affected properties in the eastern section of the contamination zone around the two former ChemFab Corp. factories that were found to be the source of the contamination.

The properties are roughly east of Route 7A in Bennington. Construction began last fall of new water lines to about 200 properties in the western section of the contamination zone, following a consent agreement between the state Agency of Natural Resources and Saint-Gobain Performance Plastics, which acquired ChemFab in 2000.

In that agreement, Saint-Gobain, which the state considers the responsible party for mitigating the PFOA contamination, agreed to pay as much as $20 million for water line work, and to cover other costs the state has assumed, since PFOA was discovered in area wells in 2016.

In addition to the funding for design work, Sears said the appropriations committee approved spending $200,000 on blood tests of residents who were exposed to PFOA, primarily through their drinking water.

Sears said testing could be expanded to residents who were not included in previous testing by the state, including those who no longer reside in the North Bennington area, but who lived there while the ChemFab factories were in operation. Sears said there also could be some retesting.

Chemfab operated in North Bennington from 1970 through 2000, when it was purchased by Saint-Gobain. It was closed in 2002. It specialized in the production of Teflon-coated fabrics, which was done by dipping the fabrics in a liquid bath of micron-sized Teflon particles and various additives, including PFOA. The fabrics were then dried in ovens at high temperatures, producing stack emissions that the state believes spread PFOA over a wide swath of North Bennington and Bennington.

Sears said the funding request now goes to the full Senate, to be added into the state’s fiscal 2019 budget. If approved it will be added to budget proposals before the House. Sears said he has conferred with Scott administration officials and believes they support it.

The funds would be placed in a now-depleted account the state had set up for mitigation efforts such as the one involving ChemFab. In the event the state reaches a settlement with Saint-Gobain covering the water line extensions and other costs in the eastern section, Sears said, the funds spent by the state would be recovered.

“This will allow us to move forward and not wait for settlement with Saint-Gobain,” Sears said.

This has been a frustrating legislative session for those seeking help dealing with Bennington’s PFOA problem specifically, and with industrial pollution in general.

House Republicans this week upheld Gov. Scott’s veto of S.103, a bill to protect Vermont children from exposure to toxic substances. The governor also is opposed to S.197, a bill that would hold companies liable for pollution caused by their operations. Scott says both would be bad for business in the state.

Since reaching a consent agreement with Saint-Gobain last summer for the western section of the contamination zone, the state and Saint-Gobain have been working on resolving the disputed eastern section. Last month, Saint-Gobain submitted the results of a study it commissioned, which contend that the two ChemFab factories were not the only source of PFOA in the section.

The state Department of Environmental Conservation, which remains convinced the factories were the dominant factor in soil and groundwater pollution, is reviewing the 7,377-page document.

Department officials said they will hold a meeting next months to update the Bennington community on PFOA-related issues.

The state has said it will take legal action if necessary, to ensure funding of a permanent source of clean drinking water to residents; the most effective means of accomplishing that, they believe, is extending municipal water lines.

Thanks for reporting an error with the story, "Senate committee approves water lines for beleaguered Bennington resi..."