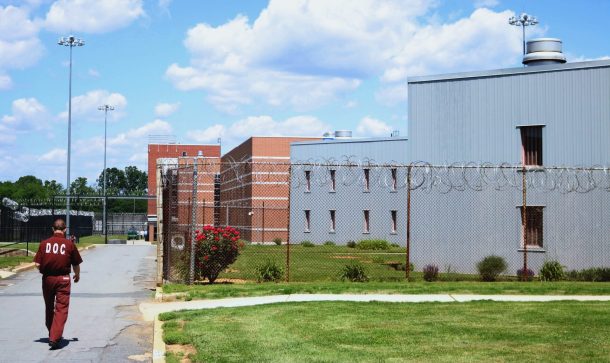 An inmate walks through the grounds of the state prison at Camp Hill, Pennsylvania. Conditions at the out-of-state facility were scrutinized later in the year, when multiple inmates who were housed there died from health issues. File photo by Jasper Craven/VTDigger

[T]wo potential bidders have inquired about housing prisoners from the Green Mountain State.

Top Vermont Department of Corrections officials say they have solicited new out-of-state prison contractors because they are disappointed with the treatment of inmates at Camp Hill, a large state prison in Pennsylvania that has housed about 260 Vermont prisoners since last summer. Inmates have complained about poor treatment and inadequate health care. One prisoner was not provided palliative care as he suffered from terminal lung cancer. Two inmates have died at the facility since last fall.

Deputy Corrections Commissioner Mike Touchette and Commissioner Lisa Menard said in separate interviews that last Wednesday was the deadline for potential bidders to ask questions about the request for proposals the state issued in March.

Menard declined to identify the entities that had met the deadline for submitting questions or say whether they were public, state-run prison systems or private prison companies. For years, the state used out of state facilities run by Corrections Corporation of America. More recently, prisoners were held in a Michigan prison operated by The GEO Group. That contract ended last year, and inmates were moved inmates in June to Pennsylvania’s State Correctional Institution at Camp Hill.

The commissioner withheld the identities of the two parties interested in the out of state contract, citing an exemption from the Vermont Public Records Act for talks on pending contracts. Menard said the entities had asked a total of 48 questions by Wednesday’s deadline. The questions and the state’s answers are expected to be posted online later this month.

Menard said other parties that had not yet submitted questions by Wednesday’s deadline were expected to also offer services to Vermont.

She would not say whether the entities involved so far were public, state-run prison systems or private prison companies. Vermont contracted with two private firms to house its out-of-state inmates before GeoGroup ended its contract with the state last year and inmates were moved to the state-run facility in Pennsylvania.

Menard and Touchette said the contract with Pennsylvania called for either side to give six months’ notice if it wished to terminate, so Vermont inmates would not be expected to make another move much before the end of the year. Formal bids are expected by early May, with the state expecting to make a selection about a month after that.

Vermont officials announced Feb. 22 that the state would end its contract with the Pennsylvania Department of Corrections when it found a suitable placement for the inmates that cannot be housed in Vermont’s overcrowded corrections system.

The February announcement came amid growing dissatisfaction by state officials and an increase in complaints by prisoners’ rights advocates over the deaths of inmates, reports of abusive behavior by staff and inadequate medical treatment of Vermont inmates.

VTDigger was the first to report in November on the October death of Roger Brown, 68, formerly of Brookline, a Camp Hill inmate who was not diagnosed with stage 4 metastatic lung cancer until just days before his death. The pain that wracked his body in his final weeks was tantamount to torture, prisoners’ rights advocates said.

Another inmate, Timothy Adams, 59, died shortly after being returned to Vermont from Camp Hill, and another was described as likely going blind from a treatable — but untreated — eye ailment.

Meanwhile, inmates wrote to VTDigger about threats, physical abuse and meals sometimes being withheld by staff at the facility.

“The people of Vermont really need to know what’s going on with Vermonters in Pennsylvania,” one inmate wrote. “The people need to know how their tax money is being spent. It’s not worth the pain and suffering that Vermonters are going through at Camp Hill!”

Vermont Corrections officials expressed frustration with some of the media reporting about the letters, saying they were legally barred from responding to individual cases without signed releases from inmates — and that inmates had been unwilling to sign such releases.

Menard said it became clear shortly after Vermont inmates moved to Camp Hill that it was not a good fit. She did not criticize the Pennsylvania system, but said that because the Vermonters occupied just one wing of a 3,400-bed prison that is part of a 25-prison system, it would have been difficult for the Pennsylvania system to alter rules and procedures to meet Vermont norms.

Camp Hill is an intake facility for prisoners destined for other units in the Pennsylvania system; officials have said that has not meshed well with Vermont’s use of the facility to house long-term inmates. For example, Camp Hill typically keeps inmates in cells 19 hours a day. Vermont’s norm for long term inmates is fewer than 10 hours a day, with the balance devoted to classes, exercise, counseling and other activities.

Menard said the state’s goal was to find a facility that would match up better with Vermont’s programming. When the state asked for new bidders in March, “We were very specific in our RFP of what we were looking for,” she said. Thanks for reporting an error with the story, "Two entities inquire about Vermont prison contract"