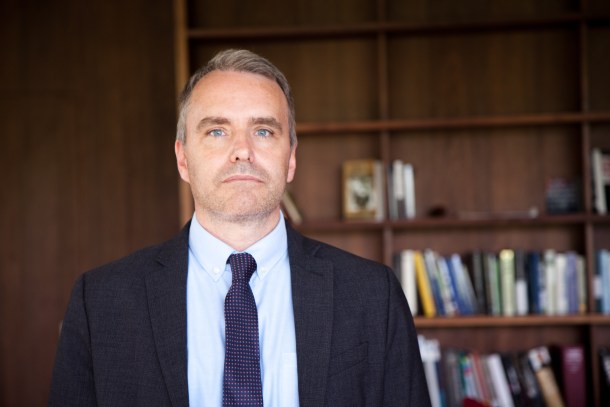 Sen. Brian Campion, D-Bennington, has sought to pass legislation that would apply strict liability to companies for their contaminants’ effects. Photo by Mike Dougherty/VTDigger

[B]ENNINGTON — A bill regulating toxic substances in Vermont that was prompted by PFOA contamination of wells in Bennington is moving toward possible adoption in the Legislature.

S.103 has cleared the Senate a second time with some additions proposed by the House, and supporters hope it will be approved without significant changes.

The bill gives an Interagency Committee on Chemical Management the authority to annually identify unregulated chemicals of concern and recommend rules or legislation to reduce the effects of toxic substances on human health or the environment.

A controversial provision in the bill on liability for businesses that use toxic or hazardous materials is now being considered separately, in S.197. That bill last week cleared the Senate Judiciary Committee, which Sears chairs, but it faces opposition from lobbyists and organizations representing industries. The legislation holds companies liable for the release of toxic substances, whether intentional or not.

The original bill was proposed after the discovery in early 2016 of widespread PFOA (perfluorooctanoic acid) contamination of wells in Bennington, believed by the state to emanate from stack exhaust from two former ChemFab Corp. factories.

S.103 establishes an Interagency Committee on Chemical Management that includes a member of the House and Senate; the secretaries of the Natural Resources, Agriculture, Health, Labor, Public Safety and Commerce and Community Development departments, and the commissioner of information.

The provisions would take effect on July 1 if passed by the Legislature and signed by Gov. Phil Scott. The governor formed the group by executive order last summer, Campion said.

“I don't know what the House will do, but I hope they concur with our work so we can get it to the governor soon,” Campion said Friday. “This is an important bill for Vermonters, and I certainly hope he signs it.”

The Committee on Chemical Management would have a citizen advisory panel with expertise in chemical management and health; review federal action under the Toxic Substances Control Act and its effects on Vermont law, and annually review chemical inventories to identify unregulated chemicals of concern.

And the committee would report annually to the Legislature regarding chemical inventories and recommend rules or legislation to reduce the effects of toxic substances on human health and the environment.

In its first report to the Legislature, the committee must recommend legislation to establish a centralized electronic chemical reporting system for businesses. The group also is required to amend state record-keeping and reporting requirements about chemical use, including thresholds for reporting, persons subject to record-keeping and ways to streamline reporting.

The legislation requires any new groundwater source to be tested by the owner or the entity that controls the source for specified chemicals prior to use as a well.

The Agency of Natural Resources could require additional testing, including by area of the state, and the agency will adopt rules on how to implement the testing requirements, including when to test and who is authorized to test.

Among changes added in the House, Campion said, are a requirement for manufacturers of children’s products containing a chemical of concern to children to report the brand name, product model and product code, if available. And the bill allows the commissioner of health to add a new chemical to the list on the basis of independent peer reviewed research.

The commissioner also could restrict the sale of or require the labeling of a children’s product containing a chemical of concern after consulting with the working group.

Thanks for reporting an error with the story, "PFOA contamination spurs chemical regulation bill"