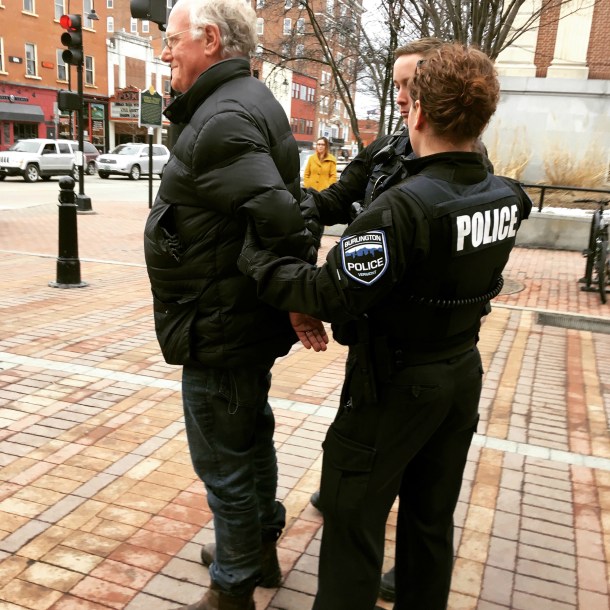 Ben Cohen was arrested for broadcasting a simulation of the sound of F-35 fighter jets from a set of speakers through the city. The roar violated the city’s noise ordinance. Photo by Caleigh Cross/Stowe Reporter

Demonstrators don’t often break the law to get their point across, but on Saturday, three activists who oppose the F-35 basing in Burlington, did just that.

Ben Cohen, co-founder of Ben & Jerry’s Homemade Ice Cream, Ray Gonda, a military vet, and Richard Joseph broke the city’s sound ordinance to make a point: The F-35s that are coming to the Burlington area are loud. Extremely loud. So loud that when the three men blasted neighborhoods with the jet sound residents emerged from their houses (with their hands over their ears) to shout at the activists to stop the deafening roar.

The noise came from a set of speakers on the back of a pickup truck. It simulated an F-35 fighter jet flying at 1,000 feet — a booming rumble that hits a decibel level of 115 — about four times louder than the F-16, the fighter jets that have been based at Burlington International Airport since the 1980s.

“We cranked this thing up and it’s insane,” Cohen said. “A lot of people were pissed off, how could you make this much noise in front of my house?”

Cohen was apologetic. He said he knew the jet blasts were obnoxious in the extreme, but he said, “It was necessary to do this to prevent a greater harm.”

The demonstration, which they had planned for several months, was difficult to execute because the three men recognized that “people weren’t going to like this sound, but we felt we had to do it.”

“We want to apologize for the discomfort that people experienced as a result of this demonstration,” Cohen said. “This was a one-time experiment for them [Burlington residents], but for people in the zone, they will be hearing this for six minutes, eight times a day, five days a week for the next 50 years.”

Cohen and his compatriots drove around town from 11:30 a.m. to 3 p.m., intermittently letting the speakers blast the sound for six minutes at a time. Along the way, they collected citations for violating the city’s noise ordinances as they drove. Police ticketed them each with $1,200 in fines. By mid-afternoon they had reached their limit — a fourth citation, with came with the authority to arrest.

In the “noise zone,” 6,600 residents in Winooski and South Burlington will hear the frequent roar of the F-35 fighter jets flying out of Burlington International Airport starting later this year. The sound will penetrate into homes, places of worship, hospitals, schools and child care facilities in certain areas of Chittenden County. Studies show the sound will adversely affect the health of children and adults and have other deleterious effects on the community that run the gamut in severity, from declining home values to the potential of a disastrous crash.

While residents of Burlington won’t be exposed to the full freight of the thunderous noise, the city runs Burlington International Airport and voters here will decide Tuesday whether or not to support a resolution that asks the military to replace the F-35 with quieter aircraft. If residents vote for the resolution, incumbent Mayor Miro Weinberger, who is up for re-election, and his rival Carina Driscoll, have said they will respect voters’ wishes. That concession is a first in the five-year battle waged by grassroots activists who have struggled to garner the attention of local, state and congressional politicians.

Cohen, Gonda and Joseph gave Burlington residents a firsthand taste of the anticipated noise levels in other areas of Chittenden County. They started their journey around the city at a King Street parking lot near downtown, where each man was issued a $300 ticket for violating the city’s sound ordinance and then made their way to Church and Main streets.

Driven away by police again, they cruised up Pine Street and stopped at Arts Riot, a popular watering hole, blasted the neighborhood with the noise and handed out fliers urging residents to vote for the resolution.

The three men were issued their third round of tickets, and, at that point, they knew the gig was up. They stopped at the Burlington Bagel Bakery and called their lawyer. Then drove up Church and Main streets one more time knowing that if they did it again they could go to jail.

The police were there at the intersection. Cohen got out of the vehicle. “They handcuffed me and put me in the car and took me to the Battery Street station,” Cohen said. Joseph and Gonda were both arrested, too. The police were “very professional” and were “just doing their jobs,” he said.

The three men were booked, put in a jail cell and not long after, released.

Cohen said he believed it was necessary for Burlington residents to hear the noise because “there is no way to describe this sound in words. People are about to vote on this sound and in order for voters to be informed, they need to hear it.”

“We proved our point,” Cohen said. “You can’t have it both ways. If the sound is illegal — if you’re going to arrest us for it — they should arrest the [Burlington] City Council that is inflicting this noise on 6,600 people.”

Cohen, Gonda and Joseph are due in court on March 29 to answer to charges of disorderly conduct. 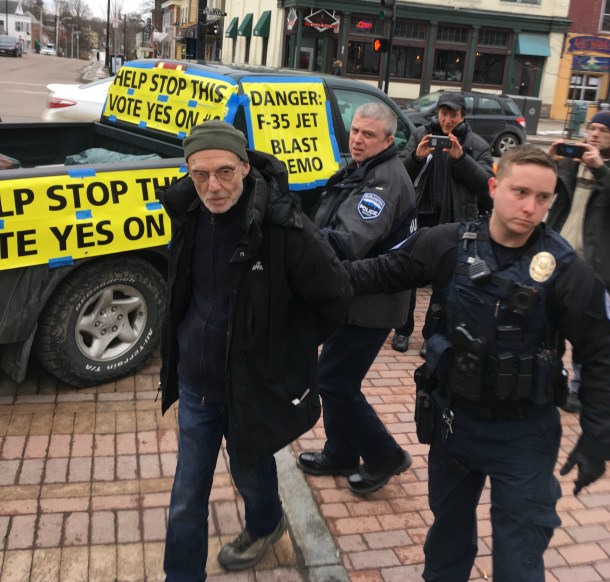 Activists were arrested for broadcasting a simulation of the sound of F-35 fighter jets from a set of speakers through the city. The roar violated the city’s noise ordinance. Photo by Caleigh Cross/Stowe Reporter

Thanks for reporting an error with the story, "Ice cream mogul Ben Cohen, activists arrested for ‘jet blasts’ in..."