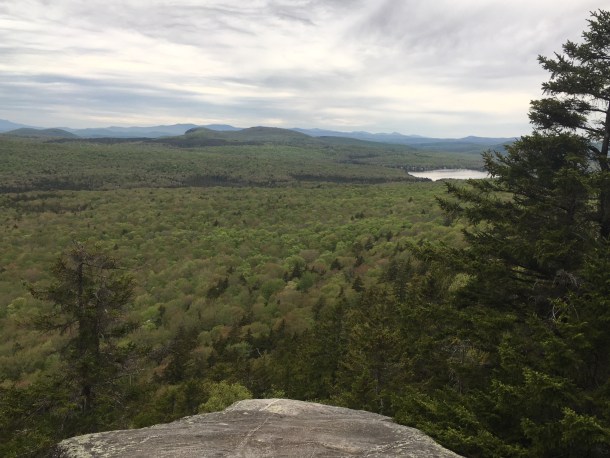 [I]t was an offhand remark Gov. Phil Scott made in December, and probably regretted. "Climate change could be in some ways beneficial to Vermont," he said, suggesting that in an era of extreme weather events the Green Mountains might be an appealing destination for climate refugees. The comment was criticized as insensitive. And for the state's forests, it isn't true.

A study published this month by the U.S. Forest Service Northern Research Station cautions against any thinking that climate change could be a boon to Vermont. “Forests in Vermont and across the northeastern United States are under increasing stress from changing temperatures and precipitation regimes and increasing prevalence of invasive insects and disease,” said Anthony D’Amato, a forest researcher at the University of Vermont and one of the authors of the study, in a statement released by the university. Rather than opportunity, increasing instability in the climate is a source of “considerable uncertainty about how to best sustainably manage these resources into the future.”

Vermont's forests have made a comeback in the past century. Reduced by logging, sheep grazing and other agricultural practices to 30 percent of the state’s land area in the late 1800s, forests once again dominate the Vermont landscape.

“Many important benefits accrue to all of us from the 78 percent of the landscape that is forested and in healthy condition,” said Michael Snyder, commissioner of the Department of Forest, Parks and Recreation. “These are direct economic benefits but also non-monetized benefits like carbon mitigation and recreation.”

Vermont’s forest recreation economy and forest products industries generate a combined $3.4 billion in revenue per year and support 20,000 jobs, according to the Vermont Sustainable Jobs Fund.

But changes associated with a warming earth pose new risks to the forest ecosystems and new challenges for those who manage them.

The study is an assessment of the vulnerability to climate change of the various forest types throughout New England and northern New York state, the result of a collaboration of researchers from universities, government agencies and nonprofit organizations.

The study found from 1901 through 2011 the mean annual temperature across the region increased by 2.4 degrees F, with even greater warming during winter. “Precipitation patterns also changed during this time, with a slight trend toward greater annual precipitation and a substantial increase in extreme precipitation events,” the report said.

Mean annual temperatures for New England are projected to increase from 3 to 8 degrees F by 2100.

The boreal forest tree species -- balsam fir, black and red spruce -- that are at the southern extreme of their range in northern New England, will feel the worst effects of warmer temperatures and variable precipitation. Northern forest-dwelling moose, already suffering a population decline due to increased deer tick and brainworm from warmer, wetter weather, likely face further population decline.

Vermont’s hardwood forests are dominated by maple, beech and birch trees; its softwoods are spruce and fir, and varieties of pine. The study notes that tree species associated with southern climates, like red maple, Eastern hophornbeam, American elm and black cherry are likely to do better in Vermont as their suitable habitat extends further north.

"Evidence indicates that increases in temperature, longer growing seasons, and more frequent disturbances will lead to increases in many invasive plant species," the report says. Forests pests like the hemlock woolly adelgid, already present in Vermont, and the southern pine beetle may push further north as winters decrease in severity.

In 2015, the Vermont Legislature commissioned a separate study on the impact of forest fragmentation -- the trend toward the breakup of large, contiguous forested areas into smaller fragments of forest, typically by roads, agriculture, utility corridors, subdivisions or other human development.

Vermont's forests are overwhelmingly held in private ownership -- 80 percent. The 2015 state study noted a trend toward increasing numbers of owners, and a decreasing size of parcels of land.

The USFS study found that because forest fragmentation results in the isolation of tree populations, it could inhibit the ability of trees to “migrate to new areas in response to climate change.”

“Trees are incredibly genetically diverse, but the rate of change (from climate change) has outstripped the natural capacity of trees to adapt to changes,” Forest, Parks and Recreation Commissioner Snyder said.

"Confronting the challenge of climate change presents opportunities for managers and other decision makers to plan ahead, manage for resilient landscapes, and ensure that the benefits that forests provide are sustained into the future," conclude the USFS study authors.

Thanks for reporting an error with the story, "Vermont forests vulnerable to climate change, study finds"