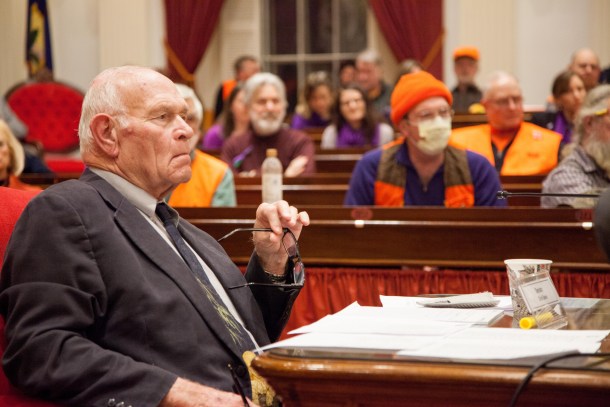 Senators gave their unanimous seal of approval on Wednesday to the first of what is expected to be a series of gun control laws after a thwarted school shooting in Fair Haven — following a mass shooting at a Florida high school — “jolted” the state’s policymakers.

Sen. Dick Sears, D-Bennington, said he never expected the bill to make it this far when he introduced it months ago, a symbol of how far the gun control debate has shifted in just a few weeks.

“One thing I’m sure of is Vermont is not immune,” he said of gun violence. “I think we knew that before Fair Haven, but Fair Haven has jolted us all.”

Police arrested Jack Sawyer, 18, earlier this month saying he was creating a kill list of students and staff at Fair Haven Union High School and preparing to carry out an attack on the school. Sawyer was arrested days after a 19-year-old man killed 17 people at a high school in Parkland, Florida.

Sawyer faces a number of charges, including attempted aggravated murder, that could carry a life sentence. Prosecutors began arguments on Tuesday to keep him in prison ahead of trial. The defense attorney representing Sawyer has said the charges against his client are too severe.

Gov. Phil Scott, who previously said he believed the state’s existing gun laws were sufficient, has had a change of heart in recent weeks after seeing how close Vermont had come to having to grapple with its own school shooting. He has said “everything’s on the table” when it comes to gun control legislation and other actions to prevent gun violence.

Sears, who is chair of the Senate Judiciary Committee, said the panel was careful when drafting S.221 to balance the need to protect people from violence with constitutional guarantees around the rights of property and privacy.

One one side of the gun control debate, he said, people have been telling him “slow down, you’re going too fast” while on the other people are saying “this is common sense, pass it.” S.221 seeks to find common ground by focusing only on individuals who are deemed an “extreme risk,” he said.

A more divisive bill proposing universal background checks is set to come before the Senate on Thursday. While a survey by Seven Days suggests that it will receive majority support in the Senate, some senators remain opposed to the idea. Sears said his committee would also take up bill H.422, which focuses specifically on gun control related to domestic violence, after the town meeting recess next week.

Sears sought to clear up “confusion” that S.221 would replace H.422, which has been unpopular among gun right advocates due to what they say is a lack of due process in the decision to seize firearms. Supporters say H.422 would give authorities the ability to take action and prevent domestic violence from turning fatal in ways that S.221 does not.

Sears pledged to begin discussions of H.422 in the Senate Judiciary Committee during this session. “But I make no promises about what will happen … other than that we will take it up and do our due diligence, as we always do,” he said.

Sen. Joe Benning, R-Caledonia, called on his colleagues to take advantage of the coalition that was created during the drafting of S.221 to show that legislators are together in responding to gun violence, even if that unity might not extend to other bills.

“It would be wonderful if we could stand united on getting this piece of legislation out unanimously,” he said. “We will have, and probably should have, debate and discussion on a number of proposals, but this one step gives us an opportunity as a legislature to advance a bill united and show the world this can be done.”

Senators then delivered that unanimous support, illustrating a dramatic and swift change in the politics of gun control in the state, which legislators say has come about due to a broader change in public sentiment around the issue.

Sen. Randy Brock, R-Franklin, was among the senators who spoke in support of the bill on the floor before Wednesday’s vote.

“I’m a longtime member of the NRA and I’ve been rated as an A+ rating by the NRA in the past,” Brock said. “This is not a gun control law, this is a lunatic control law. And I use that term very specifically, it may not be a scientific term, but it’s a term that all of us can understand. It’s designed to focus on the person who is extremely dangerous in the moment to himself and others.”

Sen. Becca Balint, D-Windham, took issue with the characterization of the bill being a “lunatic control law.”

“Although I think I understand the sentiment of the senator from Franklin, I just want to be on the record as saying I do not believe people suffering from depression or who are suicidal are lunatics,” she said. “We have, in addition to a crisis of gun violence in this country, we also have a crisis around mental illness, and I do not want the two to be confused.”

Brock said his comments were “not meant by any means to be a term relating to psychiatric illness.”

The bill gives the authorities the ability to act in situations involving someone believed to be planning to commit an act of domestic violence or suicide, or a person believed to be planning mass harm, such as a school shooting. Once guns are taken away through an extreme risk protection order issued by a judge, they can be held for a 14-day “cooling off period,” which can be extended or ended at the discretion of the court.

The bill still needs final approval in the Senate before being sent to the House, which has already started taking testimony on the bill.

Jaye Johnson, the governor’s legal counsel, told the House Judiciary Committee during testimony on Wednesday that the administration wanted to see measures with a broader reach than S.221.

“S.221 was very narrowly drafted,” she said. “If our goal is to take a meaningful step to protect our kids and our schools, I am concerned that would be an effort to move forward but only take a baby step.”

Sen. Sears said passing S.221 is only the beginning of efforts in the Statehouse to create legislation that addresses the threat of gun violence.

Thanks for reporting an error with the story, "UPDATED: Senate unanimously approves ‘extreme risk’ gun bill"