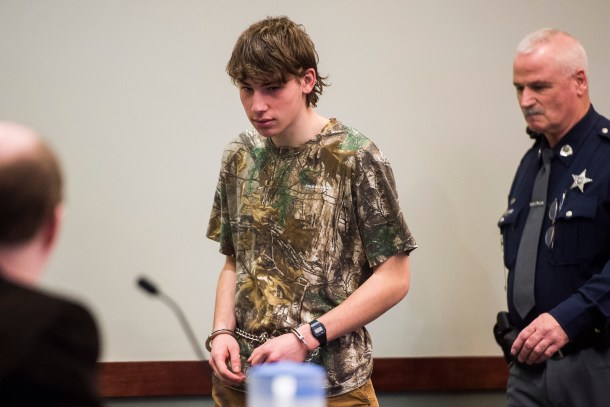 RUTLAND — Police say an 18-year-old Poultney man told them he planned to shoot up his former high school in Fair Haven, inspired by the two killers who carried out the mass shooting at Columbine High School in Colorado nearly two decades ago.

Jack Sawyer also told police of a notebook he kept where he wrote down his preparations for carrying out his plot, titled, “The Journal of an Active Shooter,” according to court records released Friday.

Police said they uncovered the plan before it could be carried it out thanks, in large part, to a girl, who they did not identify, who reported to authorities text exchanges she had with Sawyer following the school shooting in Florida earlier this week that left 17 people dead.

In those messages, Sawyer texted the girl in response to the Florida shooting, “That’s fantastic. 100 percent support it,” according to court records. He later added in a text to the girl that school shootings are just “natural selection” where the strong can get out and survive, court records stated.

“This is a stark reminder that we are not immune from tragic violence,” Gov. Phil Scott said Friday at a press conference from his Montpelier office.

“If not for the individuals who spoke up and reported something abnormal and concerning, we might be having an entirely different conversation today and we can’t accept that,” the governor said.

“To be quite honest with you, in the aftermath of Florida, this situation in Fair Haven has jolted me,” Scott said. “Especially after reading the affidavit, and realizing that only by the grace of God and the courage of a young woman who spoke up did we avert an horrific outcome.” 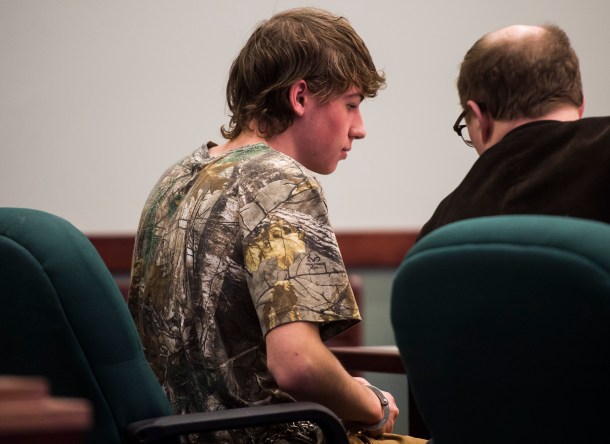 If convicted of the offenses, Sawyer faces life in prison.

Sawyer pleaded not guilty to the offenses and said little during the brief court proceeding. Police and media filled seats on one side of the courtroom. It didn’t appear that Sawyer had any family or supporters present.

Sawyer appeared in court looking disheveled, wearing a short-sleeved, camouflage shirt, tan pants and sneakers. His wrists and ankles were shackled as he stood quietly next to his lawyer and listened while the prosecutor asked that he be held without bail pending trial.

Christopher Davis, Sawyer’s public defender, told Judge Thomas Zonay that he intended to challenge the request that his client be held without bail. However, the defense attorney said he would reserve his arguments until a further hearing could be set in the matter.

“You’re going to be held without bail,” the judge told Sawyer. “Any questions at this time?”

“No,” Sawyer replied, before being out of the courtroom by an officer and taken to the Rutland jail.

Brooke Olsen-Farrell, superintendent of the Addison-Rutland Supervisory Union, wrote in a letter to parents, “An arrest was made, and there are no additional concerns on the part of law enforcement. There is no credible threat at this time.”

She added that while the school will be on February break next week, extra counselors will be available at the high school. The letter also stated that a community forum was being planned. Olsen-Farrell could not be reached for further comment.

Rutland County State’s Attorney Rose Kennedy, who is prosecuting the case against Sawyer, said after the court hearing Friday that she could not discuss the investigation, referring reporters to court records that became public following the arraignment.

“The only thing I do want to say is, I think a lot of people are wondering when they’re supposed to call police when they think something seems suspicious or off,” she said.

“I think as this case demonstrates,” Kennedy added, “I would just encourage the public to trust your gut and make that phone call to law enforcement and let law enforcement figure out if this is a threat or not.”

According to those records released following the arraignment, Sawyer had been receiving treatment for anxiety and depression for more than a year at a long-term residential facility in Maine. He recently left that facility and returned to Vermont, the documents stated.

Vermont State Police Maj. Glenn Hall, commander of agency’s criminal division, said Friday that the investigation into Sawyer began Wednesday. That’s when Fair Haven Police received a report from the mother of a girl who was friends with Sawyer, he said.

The mother was concerned that Sawyer may have been making threats against Fair Haven Union School and he recently bought a firearm, Hall said.

Those concerns led Fair Haven Police to start their investigation. Sawyer had recently purchased a shotgun at Dick’s Sporting Goods in Rutland Town, had previously been “kicked out” of the high school, and days earlier left the residential treatment facility in Maine, according to Hall.

Fair Haven Police found Sawyer later Wednesday and talked to him. He admitted he bought the gun and was out target shooting earlier in the day, Hall said.

The next day, Thursday, Fair Haven Police called the Vermont State Police for assistance in the investigation after receiving a report from a sheriff’s department deputy from Dutchess County, New York, Hall said.

The deputy told Fair Haven police that a student at a local high school in that county reported to him that she had messages on her phone from someone plotting a shooting at Fair Haven Union High School, according to court records.

Police identified the person communicating with that girl as Sawyer, according to Hall. State Police detectives talked to Sawyer again Thursday, this time at the state police barracks in Rutland.

In that interview, Hall said, Sawyer told detectives he previously attended the high school in Fair Haven, and in 2016, his sophomore year, he ran away, driving to California. When he returned, his parents sent him to the treatment facility in Maine where he stayed until a few days ago, Hall said.

Hall added, “(Sawyer) admitted that he was planning to come back to Vermont to fulfill his plan to shoot up the high school and admitted that he had thought about this plan as recently as a week ago.”

According to a police affidavit filed in the case, Sawyer also told police he planned on carrying out his plot with a bomb, but couldn’t find a place to practice.

Hall added that Sawyer told the detectives specifics of his plot to carry out the shooting, including plans to buy an AR-15 rifle and 9mm handgun. Hall said there was no indication that Sawyer had bought either weapon.

“He said he would have carried out the shooting, but wasn’t sure when, and even with law enforcement intervention he would carry it out when he had the opportunity,” Hall said of Sawyer.

A search of Sawyer’s vehicle turned up the 12-gauge shotgun, ammunition, and his notebook, titled, “The Journal of an Active Shooter.” Police also recovered from the vehicle books on the Columbine shooting, a gas mask, thumb drives, a digital camera, and a video recorder, Hall said.

He said the investigation is ongoing as State Police worked with local, state and federal authorities.

A motion filed by Kennedy, the prosecutor, sought to hold Sawyer without bail. In it, she said that Sawyer exchanged texts with the girl apparently voicing support for the Florida school shooting that killed 17, and later appearing to abandon his own plot to “shoot up” Fair Haven Union High School.

However, in later interviews with police detectives, Sawyer “admitted that the plan was still his intent and and that he had recently improved his plan and moved up his date of execution to March 14, 2018,” the prosecutor wrote.

“He explained that his inspiration came, in part, from the killers from the Columbine High School shooting,” Kennedy wrote. “He indicated that he had read many books about those killers and he had adopted some parts of their plan but was hoping to improve upon it.”

Among other “overt acts” Sawyer took to further his plot, the prosecutor wrote, were:

– On the same day, but in a later transaction, buying four boxes of “buckshot” ammunition for that gun

– Practicing shooting that gun, and lying to police by telling them he just wanted the gun to shoot at targets and to hunt

“He discussed how he is able to fool people into believing he does not still have this plan, but he does,” Kennedy wrote in the filing “He expresses being proud because he could act normally, while still hating people enough to carry through with his plan to ‘shoot up’ the school.”