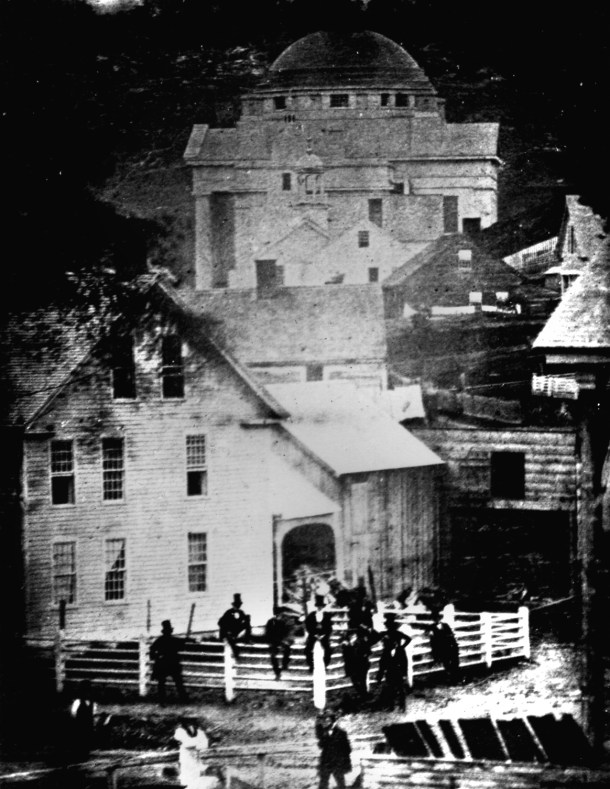 A photograph from the late 1840s or early 1850s shows the second Vermont Statehouse rising behind a group of men sitting outside a house on Court Street, then Montpelier’s principal east-west road. Courtesy of the Vermont Historical Society

[F]or Vermont’s first 30 years of existence, its government was distinctly migratory. Factions existed on the east and west sides of the state, with grievances dating back to the colonial era. Under a power-sharing arrangement, the groups had agreed that if the capital kept shifting, no region could gain control. So it was that the seat of government bounced between Rutland, Windsor, Middlebury, Newbury, Vergennes, Woodstock, Danville, Westminster and Burlington.

By the early 1800s, however, political leaders began to think it was time for the government to settle down, get a place of its own. Montpelier was the perfect compromise. It was centrally located, lying outside the sphere of influence of either camp. And it was relatively small. With a population of less than 900, it was hardly threatening.

Montpelier residents agreed to pay $8,000 of the estimated $10,000 cost of building a statehouse. Hard cash being in extremely short supply in the economy at the time, the contribution came mainly in the form of supplies. By 1807, construction was underway, but builders quickly ran through their budget. Montpelier residents agreed at a special town meeting to raise the tax rate by 4 cents on the dollar on the grand list to cover the shortfall.

The first Vermont Statehouse rose on a two-acre parcel west of the settled part of town. The land, donated by resident Thomas Davis, son of the town’s first settler, sat near the Winooski River, just west of the current Vermont Supreme Court building, according to Daniel Robbins in his “The Vermont State House: A History & Guide.”

Completed in 1808, the first Statehouse was a large rectangular wooden structure, three stories tall. The main entrance, on one of the building’s short sides, was flanked by a pair of enclosed staircases. Balconies that connected the staircases at the second and third floor levels provided cover for the entrance. A belfry rose from the roof’s peak.

Years later, the Vermont Watchman newspaper published the recollections of an elderly woman who had visited the building as a child. “Its only ornament, suspended between the ceiling and the floor, was a thing of wonderful beauty in my childish eyes. It was a primitive device for lighting the room. It consisted of an immense brass hoop, the top of which was surmounted with brass lilies, each holding a tallow candle. And beneath the lilies depended glass prisms so attached that they were swayed by currents of air.” 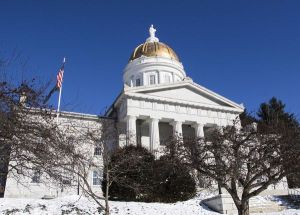 The current Statehouse was built on the site of the former one that burned in 1857. File photo by Roger Crowley/VTDigger

For a little over two decades, the building served the purposes of government. During the legislative session, the building was occupied by the governor, the House of Representatives and the Council of Censors, predecessor of the Senate.

But as the state grew, so did its government, which eventually outgrew the space. A new statehouse was needed, but it wasn’t a foregone conclusion that it would be in Montpelier. If a new capitol was in the offing, some towns thought, it was time to rekindle debate over where to locate it. Windsor, Rutland, Woodstock, Middlebury, Burlington and Randolph all had advocates, but in the end Montpelier’s advantages won out again. And again, Montpelier residents agreed to help pay for construction.

Ammi B. Young, a young architect from Lebanon, New Hampshire, who would develop a national reputation, designed the second Statehouse in the Greek Revival style, with grand columns and central pediment. The style was all the rage because Americans fancied themselves the descendants of the ancient Greek democratic tradition. This capitol stood about 100 yards northwest of the old one, at the base of a hillside. Completed in 1838, the second Statehouse closely resembled the third Statehouse, the current one, in many ways. Built of granite from the recently opened quarries in Barre, the second Statehouse had a more compact look than ours today. Its dome was low and wide, adding a Roman style element to the Greek. Covered with copper, rather than gold, the dome soon turned green with age.

To create the foundation, workers blasted through 20 to 30 feet of rock. Few precautions were taken to control the blasts. At least one worker was killed in the process and, according to one description, rock chunks hurled by the explosions whittled the old Statehouse down to a mere “skeleton.”

In creating this Statehouse, Young’s greatest challenge was how to keep the graceful lines of the exterior while accommodating all the building’s functions. Budget-conscious legislators wouldn’t let him create a giant rotunda beneath the dome, which would have wasted space. But if Young placed the House chamber directly beneath the dome instead, there would be no space for the necessary anterooms and committee rooms. Young found an elegant solution. He decided to push the large, domed House chamber toward the back of the building and place a skylight at its peak, which would give the illusion that the room was just below the domed roof.

An old inventory of materials purchased for the Statehouse offers a glimpse of life inside. The second Statehouse lacked some of the gentility and cleanliness we associate with its successor. Boot scrapers were placed by the entrance for legislators and visitors to clean mud and horse manure from their footwear. Inside, legislators, all of them men, had access to 222 “spit boxes,” but no toilets. Legislators in need could use a nearby outhouse or the facilities at the adjacent Pavilion Hotel, which many frequented for their midday meal.

The Statehouse did offer looking glasses and movable washbasins for lawmakers’ use, though for years no soap was provided. Furnaces heated the larger rooms and halls, while 26 woodstoves serviced the smaller rooms. Oil lamps had replaced candles. Records show that 18 gallons of whale oil were stored, rather incautiously, in the furnace room.

But that’s apparently not what did in the second Statehouse, which had been converted from oil lamps to gaslight before the night of Jan. 6, 1857, when fire tore through the building. Blame for the blaze fell on a worker who was heating the building that night in preparation for a constitutional convention the next day. In hopes of conserving wood, he had closed the vents to the outside. The fire in the furnace grew too hot. Soon flames were shooting through a floor register. Townspeople swarmed to the site to fight the fire. With no access to running water, they throw great chunks of hard-packed snow and ice onto the flames. For a time, it seemed the blaze was under control. But suddenly flames were seen eating through the interior walls. Everything that could burn did.

A west wind blew embers from the fire over the town. The thick snow cover on roofs may have been all that prevented the Statehouse fire from taking out the entire town, Robbins suggests.

The Legislature met in special session the next month to decide what to do — the House of Representatives gathering at the Washington County Court, the Senate at a downtown church. Lawmakers chose to keep the capitol in Montpelier. They ordered the construction of a third Statehouse, which would rise from the site of where stood the ruins of the second one.

Thanks for reporting an error with the story, "Then Again: Vermont’s Statehouse rose from ashes"