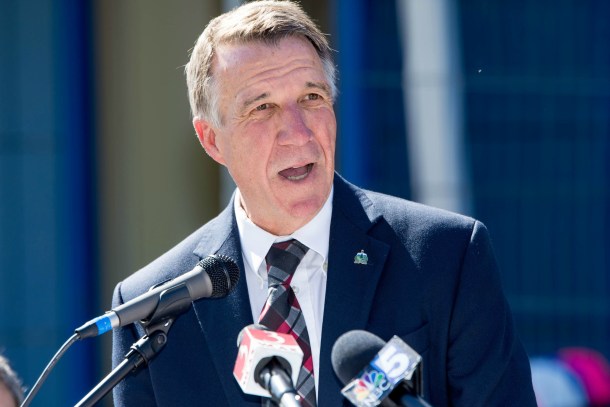 Last week, Republican Gov. Phil Scott suggested laying off school staff to plug an $80 million hole in the education fund and end the threat of a 9 cent increase on property taxes.

But he’s already backing off the idea of mandatory staffing ratios and now wants to discuss the cost-cutting option with participants at an Education Summit on Monday.

The current ratio in Vermont is an average of four students per school staff person.

Scott says the ratio should be increased to 5-to-1.

Scott says that a higher student to staff ratio would save $100 million annually and solve this coming year’s education fund gap.

Rebecca Kelley, the governor’s spokesperson, says every option needs to be on the table because the state has a significant funding challenge.

“The governor has been clear, we can’t see this increase in property taxes,” Kelley said. “We need to all work together to identify ways to address the gap.”

Representatives from the state teachers union, the Vermont NEA, say mandated firings would hurt the economy.

Education advocates welcome a conversation about ratios, but they say the gap is self-inflicted. At the end of last session, Scott and lawmakers agreed to use one-time surplus money and reserves to buy down property tax rates. That quick fix hurt the fiscal year 2019 education fund budget.

Nicole Mace, head of the Vermont School Boards Association, said the real problem with the governor’s proposal “is that it seeks to address a short-term funding crisis and an anticipated 9.4 cent property tax increase, with a solution that really needs more long-term planning.”

While it was reported that Scott wanted to mandate new ratios, his administration has said otherwise.

“This is not a mandate,” said Kelley. “There is not a one-size-fits-all” approach.

At a press conference last week, Scott made it clear he just wants to talk. “I don’t think Vermonters understand the magnitude of the problem and what is causing it,” he said. “It is all about our demographics.”

Enrollments have fallen by 25,000 students over the past 20 years. Currently, the state’s school staffing levels are highest in the nation, higher even than nearby New Hampshire, according to the governor.

“We are moving in the wrong direction because $1.6 billion to educate less than 80,000 students is problematic,” Scott said.

Statewide enrollments are down to 76,355 in 2017 from 77,182 last year, but the state has also shed a total of 394 teachers and school staff, according to Agency of Education documents.

There are 6,930 teachers and about 12,450 staff working in Vermont schools, which are significant employers in many communities.

In October, Secretary of Education Rebecca Holcombe issued a memo to school boards to consider staffing cuts this year because student-to-staff ratios are inching toward 3-to-1.

Increasing student-to-staff ratios from 4-to-1 to 5-to-1 would effectively eliminate 2,700 jobs, according to the Vermont NEA.

That’s more than six times the number of teachers that were cut from school payrolls in the past year. Darren Allen, spokesperson for the Vermont NEA, said the layoffs would undercut the governor’s attempt to pitch Vermont schools as a draw for young families.

“We are talking about laying off nearly 2,700 middle class Vermonters, and that is a really curious job growth strategy,” Allen said.

Adam Greshin, the commissioner of the Department of Finance and Management, said reducing the number of public sector jobs would make Vermont more affordable. He suggested incentives could be put in place to encourage people to move from public to private sector jobs.

“I don’t accept the argument that a school job lost is a net loss of a job in the wider community,” Greshin said.

But Allen said the way to attract young working families to Vermont and keep them here is to offer outstanding schools. He said school boards have been reducing jobs responsibly.

“Over the years the number of teachers has gone down, and those decisions were made by local school boards,” he said.

The notion of moving to a 5-to-1 ratio has no basis in best practice or good policy, according to Mace.

“It is a math problem that is not useful at the local level when the decisions made to adjust staffing levels impact employees, students and parents,” Mace said. “There needs to be some rational basis grounded in it being a better approach for students, rather than by moving ratios we will save $100 million.”

In October, VSBA’s membership passed a resolution saying the state should adopt target ratios and use equalized student-to-staff ratios instead of per-pupil enrollment figures to calculate the ratio. The equalized numbers take into account poverty, English language learners and other factors. Act 49 required the Agency of Education to study the way the state weights students in the education tax formula, but the secretary recently refused to analyze the system due to a lack of resources.

“It would be useful to know what the appropriate weights are before you seek to resolve the issue about ratios,” said Jeff Francis, head of the Vermont Superintendents Association.

Francis hopes to avoid a mandated ratio imposed on a short legislative timeline.

“What we support is taking a hard look at addressing the issue,” Francis added.

Thanks for reporting an error with the story, "Scott to initiate debate over increase in Vermont student-to-staff ra..."