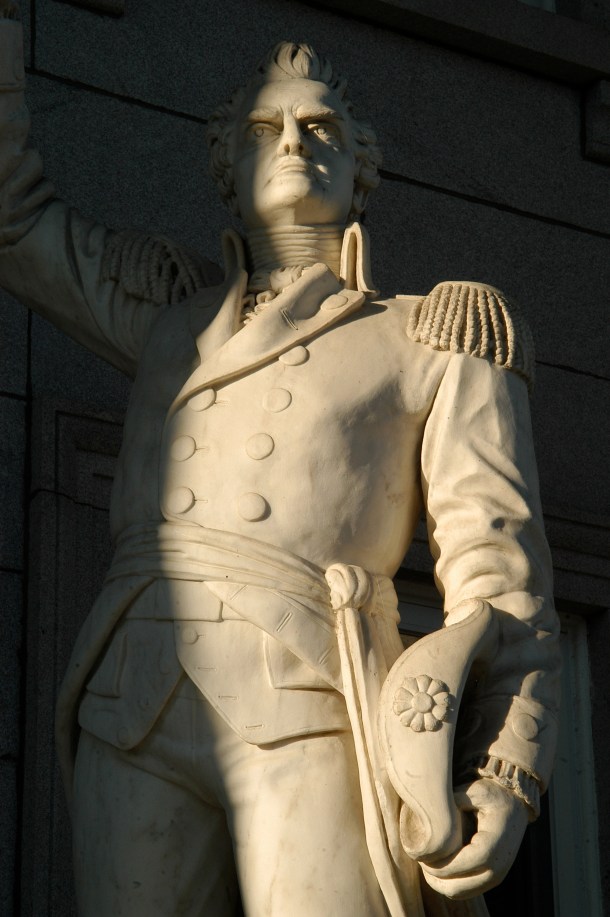 During his lifetime, countless legends grew up around Ethan Allen. After his death, still more legends emerged. Photo by Mark Bushnell

(“Then Again” is Mark Bushnell’s column about Vermont history.)

[R]emember Baker woke with a start. He heard the sound of a rattlesnake. He looked over at his cousin Ethan Allen, who lay sleeping near him on the ground. To his horror, the snake sat coiled on Allen’s chest. Allen didn’t stir. A famously heavy drinker, he was out cold.

Before Baker could knock the snake from his cousin’s chest, the animal lashed at Allen’s throat, biting him several times. Baker was stunned by what he saw next. The snake slid off Allen’s chest and slithered away unevenly. At one point, Baker swore, the snake looked back at him, its eyes crossed, and let out a burp. When Allen awoke, he felt his neck and began cursing about the bloodsucking mosquitoes that had bitten him in his sleep.

The story is, of course, absurd. Like many of the stories we hear about Ethan Allen, it never happened. But it is one that Allen, if he was anything like the way he is portrayed in books, would have enjoyed. No doubt, however, he would have preferred the stories that he and others spread that highlighted his strength and courage, not his habit of over-imbibing.

The heroic stories were part of a propaganda war to frighten his enemies. Chief among those enemies were New York colonial officials, who viewed Allen and his cohorts — various family members and friends who had moved north from Connecticut to speculate in land — as little more than squatters. New York’s government took the position that it alone had authority to grant land titles in what is today Vermont. Allen and his ilk begged to differ. They held land grants from New Hampshire, which also claimed control of Vermont.

New York’s government occasionally tried to assert its claims, sending sheriffs and posses to capture Allen and other members of the Green Mountain Boys. The Green Mountain Boys responded with threats and intimidation, and the occasional beating. The tales that grew out of these incidents were circulated to dissuade others from joining the Yorker cause.

One story tells of how the Green Mountain Boys dealt with a Dr. Samuel Adams, who urged his fellow residents of Arlington to side with the Yorkers. Adams armed himself with a pair of pistols. But Allen rallied a posse of his own and confronted Adams.

Allen is said to have walked up to Adams and knocked the pistols to the ground. The Green Mountain Boys then hauled Adams to their headquarters, Fay’s Tavern in Bennington, where they held a sort of trial, found Adams guilty and pronounced punishment. They tied Adams to a chair and hoisted him up the tavern’s famous sign, which featured a stuffed catamount, and left him dangling in the breeze for hours while a crowd gathered to mock him.

That story, actually, is true. That’s the problem with Allen: He was such an unusual character that some of the outlandish stories about him are for real. It can be hard to tell where the truth ends and fiction begins.

Take, for example, his famous words to a British officer upon leading the capture of Fort Ticonderoga at the start of the Revolutionary War. Did he really say he was capturing the fort “in the name of the Great Jehovah and the Continental Congress”? Could anyone under pressure really remember that awkward line? Or was that just what Allen later wished he had said? One witness said Allen’s actual words were “come out here you God dammed rat!” Another said Allen made a derogatory comment about the officer’s mother. Less heroic and poetic, certainly, but perhaps more believable given the circumstances and Allen’s fame for profanity.

Equally questionable is Allen’s claim that once when two men attacked him, he grabbed both and lifted them into the air at arm’s length, then he proceeded to bash them together until they begged him to stop. Or his claim that while a prisoner of the British, he had frightened his captors by using his teeth to twist out a nail from his handcuffs. “Can he eat iron?” one of his British captors supposedly said in amazement.

While Allen was famous during his lifetime, his reputation only grew in the decades after his death, as people spun out more and more unbelievable stories about him. He became Vermont’s William Tell, its Robin Hood, its Paul Bunyan, whose shadow loomed across the landscape. And why not? He was part of Vermont’s creation myth, and creation myths require an outsized figure. Ethan Allen fit the part.

Over the years, Vermonters swapped new tales of Allen’s feats, trying to outdo each other. His brother Ira bragged about Ethan’s hunting ability. Ira claimed that as a young man, Ethan could run down deer. While hunting one day in Poultney, Ira said, Ethan had shot a deer. He hung the skin and meat and then, to scare off any interested ravens, he hung his hat beside the deer. Soon, Ethan had shot a second deer, and beside this one he hung his hunting jacket. So it went with Ethan shooting deer after deer, until he had to peel off his breeches. Then he wrapped himself in the hide of the first deer and walked back to his camp.

Deer weren’t Ethan Allen’s only prey. A story has it that he was late one day to meet friends at a tavern in Dorset. On the way, he had been pounced upon by a catamount. Allen had pried the animal off his back and wrung its neck with his hands.

Another tale that trumpeted his courage also cast Allen as a gentleman. Allen is said to have been with a dentist in Sunderland when a woman arrived, asking to have a painful tooth removed. She lost her courage, however, when she saw the dentist’s frightening tools. Allen assured her it would be quick and painless. To prove it, he had the dentist remove a perfectly healthy one of his own teeth.

Not all the legends of Ethan Allen are complimentary, however. One tells of a day when he was in a boat on Lake Champlain with Seth Warner, a mild-mannered member of the Green Mountain Boys, when Warner’s powder horn fell overboard. Allen, ever the man of action, dove after it, while Warner quietly sat in the boat.

When Allen didn’t resurface for some time, Warner dove in after him. He swam to the bottom and saw that Allen had recovered the power horn — but was busy trying to pour its contents into his own horn.

Thanks for reporting an error with the story, "Then Again: Hard to tell truth from fiction in Ethan Allen legends"