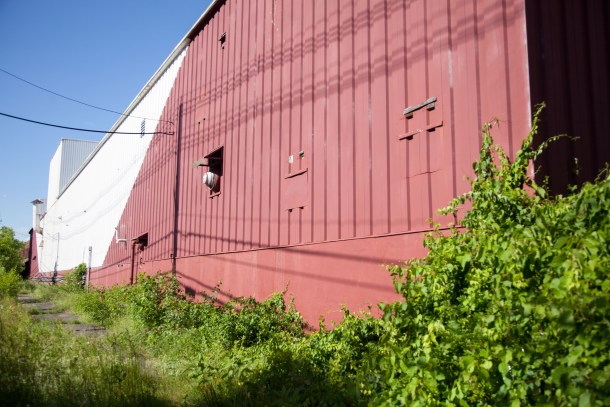 Chemfab, which was purchased by Saint-Gobain in 2000, produced chemical-coated fabrics in its North Bennington facility until 2002. File photo by Mike Dougherty/VTDigger

[N]ORTH BENNINGTON — Saint-Gobain Performance Plastics has agreed to pay for about $20 million in water line extensions to homes in a PFOA contamination zone around the former ChemFab Corp. plant it once owned.

Saint-Gobain will fund new water lines connecting about 200 homes in sections of Bennington and North Bennington.

The North Bennington plant on Water Street/Route 67A operated from the late 1970s through 2002, when Saint-Gobain, which purchased the business in 2000, moved the operation to New Hampshire.

Construction of municipal water line extensions in Bennington and North Bennington village will begin this fall, according to the announcement, with the aim of making significant progress before winter. The areas covered are to the west of Route 7A and a rail line, while environmental testing is continuing on contaminated properties to the east of that line toward a possible settlement.

Overall, extension of water lines to all areas of the state-designated zone is estimated to cost more than $30 million.

In addition to funding work in the western section, Saint-Gobain has committed to completing an expedited investigation in the rest of the affected area, which will inform a resolution for that area, according to the officials.

“This agreement represents important progress to ensure the people of Bennington and North Bennington have clean, safe drinking water,” said Scott. “The entire state team stands together to continue working until long-term drinking water solutions are in place for the entire impacted area, but today is a critical step. I commend Saint-Gobain for continuing to work to resolve the remaining issues.”

Sen. Dick Sears, D-Bennington, speaking on behalf of local legislators, thanked the state team. “All have worked tirelessly to come to this point. We would also like to thank our constituents for their patience and support during these difficult times. Construction will begin and significant progress will be made in 2017,” he said.

Sears called this a significant milestone in bringing long-term drinking water solutions to all residents, while noting that work remains. “We will all continue to press to make sure we achieve this result for everyone impacted,” he said.

The state plans to seek funding from Saint-Gobain or any other entity responsible for contaminating the eastern section of the affected area. If the state is unable to get such a commitment, officials said, it will use its legal authority to pursue long-term drinking water solutions for all affected residents.

Legislation passed this year, which was sponsored by Sears and Sen. Brian Campion, D-Bennington, would hold any party responsible for releasing PFOA into the atmosphere liable for the cost of extending municipal water lines or otherwise addressing water contamination in a permanent manner.

Saint-Gobain has already supplied bottled water and carbon filtration units for affected houses. The head of the company said it is committed to going further.

“Providing potable drinking water to citizens of Bennington and North Bennington has always been our shared goal,” said Tom Kinisky, president and CEO of Saint-Gobain. “The point-of-entry treatment (POET) systems that we have already voluntarily installed, and our funding of the planned water line extensions, show our commitment to achieving this outcome.”

Walke described what will be found in the agreement as "following through on the discussions we had with the community in April."

Concerning the eastern section of the contamination zone, Walke said it involves a similar number of properties with PFOA contamination. Saint-Gobain and the DEC have worked out an agreement for the company to pay for additional environmental testing in that area being undertaken under supervision of the agency.

A principal point of disagreement has been whether some of the well pollution east of Route 7A has migrated from a former Bennington landfill on Houghton Lane.

Walke added that a concurrent settlement will be announced Wednesday concerning Saint-Gobain's challenge to Vermont's advisory level of 20 parts per million for safe drinking water. The firm had challenged the level in Vermont environmental court.

He termed the development "really good news," saying the agreement covers water line connections for every property in the contamination zone.

Hurd said the company will fund water line extensions and cover plumbing hookups inside the dwellings as well. If someone does not want to have town or village water, the line likely will be capped at the roadside, where it could be connected later, probably at the property owner's expense.

Landowners in the area to receive water service were cautiously optimistic, pending a look at the settlement details. Jim Sullivan, who also serves as executive director of the Bennington County Regional Commission, said, "This is obviously very good news, and we are anxious to get [construction] going."

Thomas Gentle, who lives west of the plant, said he was "extremely pleased" but noted that "the devil is always in the details."

In total, "I think this seems like great news," he added.

Shaina Kasper, Vermont state director of the Toxics Action Center, said she was "really excited to hear the state explain the settlement [details]. ... This is a positive step in the right direction."

Kasper, who has been involved in discussions related to proposed new state legislation covering industrial chemical use, said she hopes the settlement will provide momentum and ideas that will result in passage of such a bill next year.

Members of the Scott administration and the AG’s office will be in Bennington and North Bennington this week to discuss the terms of the settlement.

The Agency of Natural Resources and AG’s office will host a community meeting Wednesday at Bennington College, be available to the community Thursday during the day, and host an open house Thursday evening.

The settlement also will be reviewed during a 30-day public comment period.

The meetings to discuss the settlement details and construction plans will be Wednesday at 7 p.m. at Tishman Lecture Hall at the college; Thursday from 10 a.m. to 4 p.m. at the Vermont Department of Public Health offices at 324 Main St. in Bennington; and during an open house Thursday from 6 to 8 p.m. at the Bennington Firehouse on River Street.

(Correction: Because of an editing error, a previous version of this story said Saint-Gobain still owns the former ChemFab plant.)

Thanks for reporting an error with the story, "UPDATED: Plant's former owner to pay $20M for water lines to homes wi..."