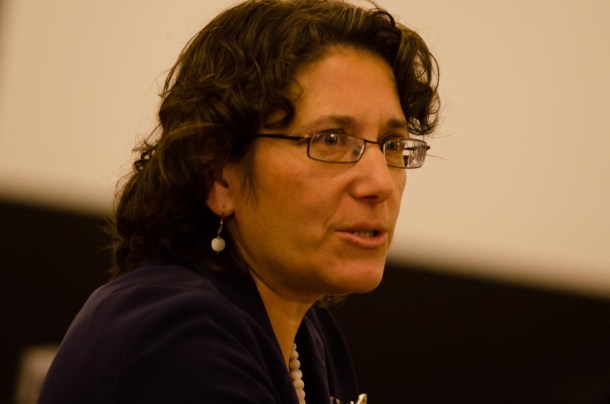 Deb Markowitz, the former head of Vermont’s Agency of Natural Resources, has been awarded a lifetime achievement award by the New England division of the Environmental Protection Agency.

As secretary of the agency between 2011 and 2017, Markowitz introduced “one of the most productive and innovative eras in the agency’s history,” according to the EPA.

The EPA lauded Markowitz for improving morale and instituting key new programs. The award was given this month.

“When Deb arrived, the organization was shell-shocked from years of budget cutting and rotating secretaries,” EPA representatives wrote. “Within a year, it had entered a sustained period of innovative environmental policy improvement. Over the next six years, Deb and her commissioners and staff secured protection for shorelines; universal recycling requirements; a Lake Champlain cleanup plan, and greater attention to forest fragmentation.”

The daughter of first-generation Americans, Markowitz was taught from an early age that it was important to make a personal contribution to the public good, according to her younger sister, Laura Markowitz, of Tucson, Arizona.

By age 19, Markowitz was serving on a women’s commission formed by then Burlington Mayor Bernie Sanders.

“I remember thinking, ‘Wow, when you’re 19, you can do so many things,’” Laura Markowitz said. “This is what Deb wanted to do — to make the world a better place.”

Even as a budding politician, Markowitz found a way to effectively communicate, her sister said.

“I think she has some way of being with the people around her where she wants to bring out the best in others,” Laura Markowitz said.

Markowitz said she was proud of turning around the agency.

“My most important success is that I led an agency where the employees and staff and all the people there felt like their work was valued and supported, and we got things done,” she said. “As a leader, we don’t get things done by ourselves.”

Markowitz has held leadership roles for most of her life. A graduate of the University of Vermont, she earned a law degree from Georgetown University, and soon founded the Vermont League of Cities and Towns’ Municipal Law Center.

She then served as Vermont’s Secretary of State for 12 years and ran for governor in 2010, losing in the primary to Peter Shumlin.

She credited the agency staff for her success and gave Shumlin kudos for his leadership style.

“I appreciated having a governor who supported me and gave me the freedom to run the agency I thought was best,” Markowitz said. “Governor Shumlin basically said, ‘Here’s ANR, and go for it.’”

Thanks for reporting an error with the story, "Markowitz wins EPA lifetime achievement award"