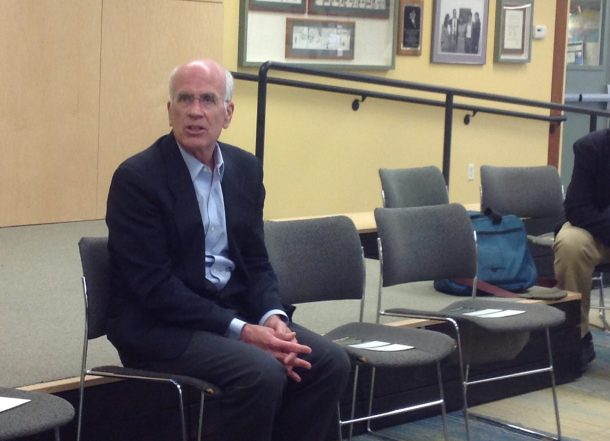 U.S. Rep. Peter Welch came to the Northeast Kingdom on Thursday to listen, and he left with plenty to talk about when he gets back to the nation’s capital.

Welch spent the day in northern Vermont, hosting a morning roundtable forum on infrastructure in Derby and one on economic development later in the afternoon in Newport. The neighboring municipalities are located just miles from the Canadian border.

About 15 people attended each of the events, from municipal leaders to regional economic development officials, health care professionals to community activists.

At both stops, Welch said President Donald Trump found his strongest support in his campaign for the White House in rural areas like the Northeast Kingdom where he won 49 percent of the vote.

“What I’ve heard in Newport and Derby, I’m sure my colleagues in some of the Trump districts are hearing from local people, who have to deal with reality, who have to deal with the challenges of rural America,” Welch said. “So, I think I can engage (fellow Congress members) on common ground, as opposed to ideological grounds.”

“We’re just trying to see what’s out there, money and planning for infrastructure,” Spates said.

“The mircobrewery industry is a growing industry. If you had somebody who wanted to do that up here, that came to us, we probably wouldn’t be able help in the way that they need,” Spates added. “That’s kind of what we’re looking at for Derby, how do we look at water and sewer infrastructure, allocations.”

Newport City Manager Laura Dolgin attended both the Newport and Derby roundtables and came with a list detailing $16 million worth of needs, from road repairs to underground pipe replacements.

“The city’s infrastructure is aging,” Thomas Bernier, Newport’s public works director, said, adding that the majority of city’s water and sewer lines are 60 to 100 years old. “So our capacity to expand is limited without addressing that issue.”

Welch asked about a prominent downtown Newport location, the “hole in the ground” on Main Street. He said he wanted to know if any money from a recent nearly $150 million settlement announced last week between a court-appointed receiver now overseeing that property and the financial institution Raymond James & Associates would go to revitalizating that site.

Developers Ariel Quiros, the owner of Jay Peak, and Bill Stenger, former CEO and president of the ski resort, had planned a multi-story, multi-use building for that location and razed much of the downtown block in March 2015. A year later, Quiros and Stenger were charged with perpetrating the largest fraud in state history. Raymond James served as Quiros’ brokerage firm.

Now, a series of foundation and cellar holes are all that remains on the site, surrounded by a fence. Michael Goldberg, the court-appointed receiver in the fraud case, is in charge of several properties that are at the heart of the cases against the two developers, including the one on Main Street in Newport.

Goldberg last week announced the almost $150 million settlement with Raymond James, who he alleged in a lawsuit had “aided and abetted” Quiros in carrying out a “Ponzi-like” scheme to defraud investors of some $200 million in money raised the the federal EB-5 immigrant investor program.

Dolgin said while the settlement was good news, Newport had not invested any money in the downtown project and so had no losses to recoup in the settlement.

“Even though Newport philosophically supported the project they did not actually lose any dollars,” she added.

“We do have that hole in the ground,” Welch said.

“We do have what we like to call the Main Street development,” Dolgin politely responded.

The city manager also said Newport has secured grant funding to hire a consultant, Burke + White Real Estate Investment Advisors of Burlington, to conduct a study of the site.

“They’re just getting started,” she added.

Welch, at the meetings in Newport and Derby, said Trump has talked of proposing a $1 trillion infrastructure improvement plan for the nation. Welch added there is “broad agreement” between Democrats and Republicans that the country needs better roads and bridges as well as sewer and water systems.

“The challenge for us will be the argument on how to pay for it,” the congressman said, adding that he remains “flexible” on possible revenue for the plan.

The congressman also talked about cuts Trump has proposed in his budget, including doing away with the Community Development Block Program, which annually provides about $7 million in federal funding to communities for projects around Vermont. Welch said he is working to save the program from the chopping block.

“We’ve got a good shot at it.” he added, pointing out the many benefits of the program to rural communities, a prime Trump constituency.

Before Welch left the meeting in Derby, Spates, the Selectboard chairman, presented him a gift.

He handed the congressman a couple of jugs.

“Nobody leaves the Kingdom without syrup,” Spates told him.

Thanks for reporting an error with the story, "Newport, Derby residents bring Welch wish list"