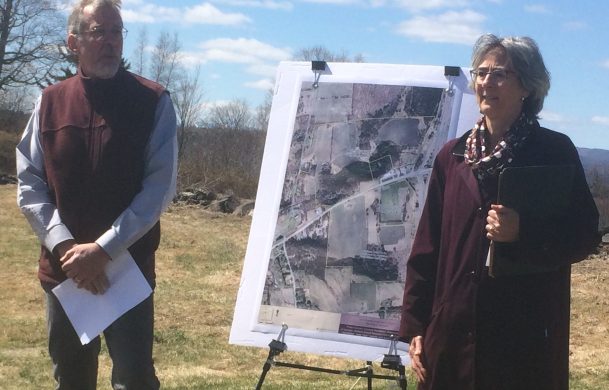 Brian Shupe, executive director of the Vermont Natural Resources Council, and Sandra Levine, senior attorney at the Conservation Law Foundation, with a photo of a 150-acre property in Randolph being sold to the Castanea Foundation. Levine’s organization was granted party status in Act 250 proceedings for a large development proposed for the site. Photo by Mike Polhamus/VTDigger

RANDOLPH — A landowner who proposed hundreds of condos, a hotel and other commercial development off interstate Exit 4 is instead selling most of the parcel into conservation.

Advocates have until midsummer to raise $1 million to purchase the remaining 22 acres. Otherwise, they say, that land probably will end up in the hands of another developer with similar plans.

Co-owner Sam Sammis, a real estate broker from Greenwich, Connecticut, said he had planned for 40 years to develop the area at the Interstate 89 exit. In 2015 he sought permits from the state to put 274 residential units, 280,000 square feet of office space, 236,000 square feet of industrial space and a 180-room hotel on the land, along with a highway rest stop.

The site overlooks the village of Randolph and the Rochester Mountains. Currently it encompasses agricultural land, wetlands and a disused golf range.

Sammis and his wife are selling 150 acres of it to a Montpelier-based conservation organization called Castanea Foundation for $1.2 million, the parties announced Tuesday.

“It’s a big challenge, but we’re very excited about having the opportunity to try to conserve this property as well,” Bruhn said. The organization has raised about $150,000 so far, Bruhn said.

Sammis said he’s glad to have been able to sell the land to conservationists. 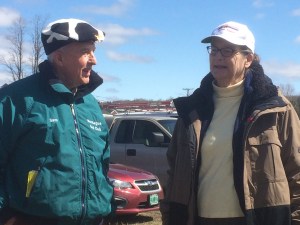 “We love Randolph,” he said at a news conference Tuesday. “We’ve done a lot with preservation, here and away from here, in Vermont, so this sale, for our preservation interests, means a lot to us.”

Sammis bought the property in 1973 with the intention of building a shopping center there, he said.

Randolph “desperately needs” jobs, Sammis said. In the past he’s said that the development would bring such jobs.

Some Randolph residents argue the development would have endangered employment at establishments in the village that would have faced increased competition.

“We felt this was a threat to downtown,” said Dave Hurwitz, of Exit 4 Open Space, a group that formed in opposition to Sammis’ proposed development.

Hurwitz said the job claims for the development were never backed up.

But supposing it were to create jobs, Hurwitz said, Randolph residents don’t necessarily need or want more jobs in hospitality or other tourism-related fields.

Now a business of a different sort is moving onto the property.

Miles Hooper, of Ayers Brook Goat Dairy, will be running a goat dairy there. “I’m privileged to be the farmer that gets to operate on this beautiful piece of land,” he said at Tuesday’s news conference.

Hooper originally worked with Hurwitz in opposition to Sammis’ plans.

“My interest in figuring out an alternative (to the development) came from the need to keep productive lands in the area in agriculture,” Hooper said. Randolph has the highest concentration of small farms in the state, he said, and small farms “keep the state looking the way it is,” in addition to drawing tourists and revenue associated with them.

Hooper will be leasing the 150-acre piece from the Castanea Foundation, said that group’s executive director, Tim Storrow.

The dairy will create and preserve jobs — “real jobs, with benefits” — in Randolph, Storrow said. Feed dealers will benefit from Hooper’s dairy business, as will veterinarians, farm equipment dealers and cheesemakers, Storrow said.

“This is as much an economic development project as a conservation project,” Storrow said. 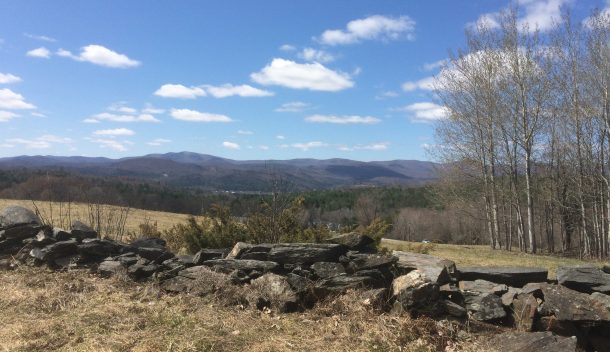 The view from the land to be conserved in Randolph. Photo by Mike Polhamus/VTDigger

Thanks for reporting an error with the story, "Randolph site once up for development now to be protected"

Vermont Conversation: White supremacists and the ‘radical left’ in the Trump/Biden debate

Vermont in a tie for best U.S. Census response

Don Turner: The importance of this election

John Steen: We Need an education in public health

Vermont Conversation: White supremacists and the ‘radical left’ in the Trump/Biden debate

Vermont in a tie for best U.S. Census response