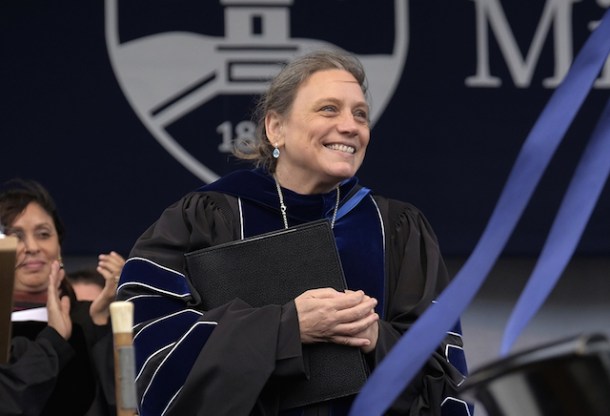 [T]he president of Middlebury College supports having Charles Murray lecture on campus this week despite divisions — including within the department co-sponsoring the event — at the liberal arts college.

“Our view is that if we stand for anything, it’s the free exchange of ideas,” said Bill Burger, vice president of communications at Middlebury. He cited President Laurie Patton’s inaugural address two years ago when she specifically pushed the idea of having healthy arguments as a way to foster learning.

“We trust the community can engage and argue about the issues while also respecting his right to speak,” Burger said Monday.

Patton plans to go to the Thursday lecture by the controversial speaker, Burger said, as she would if any student club invited her and her scheduled allowed. Her attendance, Burger said, does not indicate an endorsement of Murray’s views. Burger said Patton was “very aware” of Murray’s work but declined to share her personal views, saying they were irrelevant.

In the 1994 book “The Bell Curve,” Murray and his co-author wrote about racial differences in intelligence, their theories why and the social implications.

The controversy, Burger said, has prompted the college to move the lecture to a room that can hold twice as many people. Students and faculty with Middlebury IDs will be allowed in until five minutes before the event, when any unused seats will be made available to the public, Burger said.

Meanwhile, Murray said Monday that he was aware of protests being organized against his lecture. He shot back at a professor who challenged the validity of his work as ignorant. 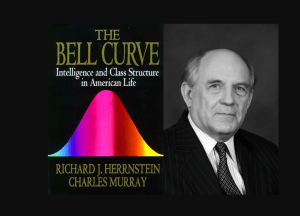 Charles Murray, co-author of “The Bell Curve,” has been invited to speak at Middlebury College in March. Photo courtesy of American Enterprise Institute

Professor Michael Sheridan, chair of the Department of Sociology and Anthropology, has called the libertarian political scientist a “pseudoscientist” with a legacy of racism. Sheridan has criticized the Department of Political Science for co-sponsoring Murray’s lecture, which will center on his 2012 book on class divisions in the United States, “Coming Apart.”

The Middlebury student-run American Enterprise Institute Club invited Murray to speak. No college funds are being used to pay for Murray’s trip, according Chairman Bert Johnson of the political science department.

Johnson said he agreed with much of Sheridan’s critique of the weakness of Murray’s work, but defended the decision to co-sponsor the event.

“It has generally not been peer-reviewed, nor do I find it convincing. To the contrary, I disagree with the vast majority of Murray’s work,” Johnson said.

However, Johnson said he believes Murray should speak and the department was right to sponsor him because his talk is about political science and of interest to a significant part of the Middlebury community. He acknowledged division within the department about the co-sponsorship and whether Murray should have been invited.

“The department is not unanimous on this matter,” Johnson said. “Disagreement centers on the meaning of the department’s co-sponsorship, whether it is merely an affirmation that all voices should be heard, or is conferring undue legitimacy on Murray’s views.”

One source said some political science professors requested over the weekend that the department sponsorship be revoked.

Johnson said the feedback over the weekend has been split, ranging from people “very upset to very supportive.”

A group of about 125 students and faculty met Monday to discuss taking opposing actions, Sheridan said. Members of a group calling itself Middlebury Resistance could not be reached.

Sheridan said he would be more comfortable if Murray were part of a panel discussion where his views could be challenged. Having him speak alone gives Murray “too big a soapbox,” Sheridan said.

Murray shot back that Sheridan didn’t understand “The Bell Curve” and “is ignorant of the state of knowledge in psychometrics.”

Sheridan said he read “The Bell Curve” in the 1990s and found it “essentially wrong-headed.” He added: “And I claim no knowledge of psychometrics. What I do know a bit about is how economic stratification relates to culture, and how learned behavior shapes social organization.”

Murray has a daughter who graduated from Middlebury College. He gave a talk in 2007 for the Economics Department with no controversy, he said.

Murray said about half of his college speeches in the past year have drawn protests. He said the election of Donald Trump undoubtedly fueled the opposition at Middlebury, but that protests have been more frequent in recent years as part of “what appears to be a radicalization of elite campuses and of the anti-free-speech movement.”

Murray said he would be taking questions after the Middlebury lecture.

“As for giving me too big a soapbox, I will have 45 minutes to indoctrinate the students with my pseudoscience. The Middlebury faculty has had four years,” Murray said.

Thanks for reporting an error with the story, "Middlebury president to join audience for divisive speaker"