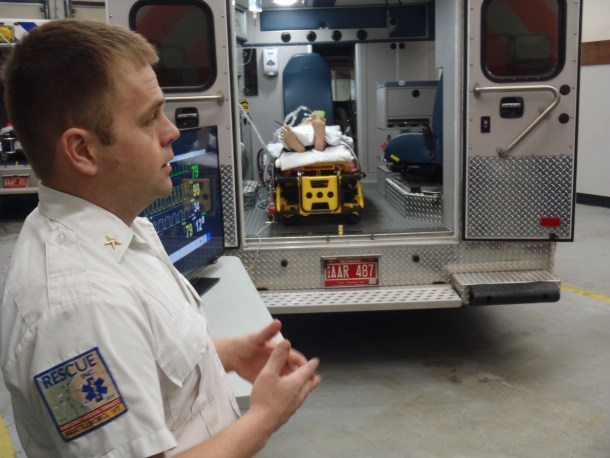 (This story is by Bob Audette, of the Brattleboro Reformer, in which it first appeared online Feb. 8.)

“We can’t formally confirm these were overdoses until the Vermont medical examiner conducts an investigation, but there are indications the deaths were drug-related,” said Capt. Mark Carignan from the Brattleboro Police Department. “There were no signs of foul play or violence, but the investigation is ongoing.”

When they arrived at Green Street, responders found one dead man and a woman in critical condition. She was taken to Brattleboro Memorial Hospital before being sent to Dartmouth-Hitchcock Medical Center in Lebanon, New Hampshire, where she later died.

Local emergency personnel have responded to a number of overdoses in the past couple of years, and overdose deaths are on the rise around the state and the country. Carignan said it is hard to tell exactly how many overdoses there have been in the region because not all are reported to the police. In some cases, people are taken directly to the hospital by friends or family, and police are not notified because of privacy laws.

“Unless that person dies, we don’t hear about it,” he said.

He said the responses can take a toll.

“It’s hard on our staff to see these people struggling with addiction,” Hazelton said. “We are medical providers who see the families and see the effects and damages the situation has on those families. It’s not uncommon to be in a home and have little kids around who are witnessing our resuscitation efforts. We do a lot of dealing with grief as our providers are actively trying to resuscitate a patient, whether that’s a medical emergency, trauma or an overdose.”

Brattleboro Assistant Fire Chief Lennie Howard said that since the beginning of the year, the department has responded to or assisted Rescue Inc. with at least a dozen overdoses.

“It wears on emergency workers after a while, but that’s what we do, and we will keep doing it,” Howard said.

While the Brattleboro Police Department doesn’t carry Narcan — the brand name of the drug naloxone — which is used to treat overdoses, both the Fire Department and Rescue Inc. carry it. Hazelton said Rescue Inc. has been carrying it for more than 30 years.

“What we have seen is an increase in the number of times we need to use it to reverse an overdose,” he said. “We are having to use multiple doses. The same effect we used to get with a single dose now takes more than one.”

Hazelton said that’s because it’s rare these days that the substance a person might be overdosing on is pure heroin, and it might contain other drugs, such as fentanyl.

“We never know what we are dealing with, what type of substance or what amount. It’s taking more naloxone to get people breathing again,” Hazelton said.

One problem agencies are encountering with the drug is its cost. U.S. Sen. Patrick Leahy, D-Vt., is one of a number of senators who signed a letter expressing their dismay at price hikes for an overdose-reversal drug.

Meanwhile, emergency responders are struggling with ways to address opioid use. Hazelton, as with others involved in dealing with the crisis, said that although Vermont has treatment options, it doesn’t have enough capacity to deal with all the people who need and want help.

In response, in places such as Manchester, New Hampshire, the Fire Department has set up its stations as “safe zones” where people suffering from adverse drug reactions can go for help.

“While we haven’t been formally designated a safe zone,” said Carignan, “the police station and the Fire Department are de facto safe zones. If someone who is suffering from an overdose comes to us, we will get them to the hospital or call Rescue Inc. We are not interested in citing them with a criminal offense. The goal of the response is to get them the medical attention they need.”

Vermont has its Good Samaritan law that means if you call for help for yourself or a friend, criminal charges won’t be filed for possession of illegal substances. But, said Carignan, that doesn’t apply to people who are selling drugs. The Police Department’s goal is also to get the drugs off the street and prosecute those who are selling them.

He also said the department is collecting information that might help emergency responders and legislators develop more effective responses. Each time providers respond to a report of an overdose, investigators check into why it happened.

“Was it a new user? Was the consumption method changed? Or did the user have access to what we call a ‘hot batch’?” he said. Sometimes the potency varies and if a batch is stronger or has a lot of fentanyl in it, it could result in an overdose.

In regard to the three deaths Monday, said Carignan, “We don’t believe we have a hot batch in Brattleboro, but all heroin is dangerous.”

Any pharmacy in Vermont is allowed to sell naloxone to any person who wants to have it, without a prescription. Insurers and Medicaid can cover the cost so people do not have to pay out of pocket. There is no charge at distribution sites. In addition, the Department of Health supplies naloxone to all EMS and law enforcement agencies that want it.

Anyone seeking more information or who is in need of help for themselves or a loved one can visit healthvermont.gov/alcohol-drugs.

Thanks for reporting an error with the story, "Drugs suspected as three die in Brattleboro"