[S]en. Patrick Leahy, D-Vt., along with 30 Democratic colleagues, is demanding answers from a pharmaceutical company that has increased the price of a lifesaving anti-opioid drug injector more than sixfold over the last two years.

In January, Kaiser Health News reported that Kaleo Pharmaceuticals, a Virginia-based company, had greatly increased the price of its anti-overdose injector called Evzio. The company has raised the price of its twin-pack of the injectors — which deliver naloxone to people who overdosed — from $690 in 2014 to $4,500 in 2016. 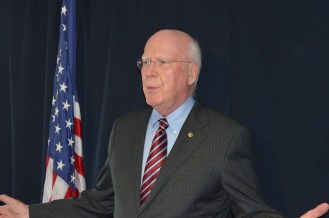 In a blistering letter sent Wednesday to Kaleo Pharmaceuticals CEO Spencer Williamson, Leahy and fellow Democrats said the hike “threatens to price-out families and communities that depend on naloxone to save lives.”

“This drug is now in the hands of first responders and families struggling with substance use disorder across the country,” the letter reads. “It is particularly needed in rural areas where access to life-saving emergency services can be limited.”

According to the Food and Drug Administration, Evzio accounted for nearly 20 percent of the naloxone dispensed through retail outlets between 2015 and 2016, and for nearly half of all naloxone products prescribed to patients between age 40 and 64 — the group that represents the bulk of naloxone users. Evzio is one of only two FDA-approved naloxone products, the other being the nasal spray Narcan.

More than 30,000 people died from opioid overdoses in America last year, and a recent Seven Days investigation found Vermont deaths in 2016 reached a record high of 100.

In July, President Barack Obama signed into law the Comprehensive Addiction and Recovery Act, which instructed the Department of Health and Human Services to re-examine prescription policies in the United States and enacted more stringent FDA requirements for opioids to be approved for new applications. Another provision of the law, written by Leahy, expanded availability of naloxone in rural areas.

“At a time when Congress has worked to expand access to naloxone products and to assist state and local communities to equip first responders with this life-saving drug, this startling price hike is very concerning,” the senators wrote.

The letter asks Kaleo to fully explain its pricing structure for the naloxone injector and to account for whether increased production costs contributed to the price spike. The senators also sought additional details regarding Kaleo’s contention that it donates the drug to cities, rehabilitation programs and first responders.

“How many devices does Kaleo set aside for your donation program compared to your total production?” the letter asks.

Kaiser reported that, in addition to the surge in price for Kaleo’s injector, the cost of naloxone has roughly doubled over the last few years as the demand for the drug has increased.

Thanks for reporting an error with the story, "Leahy presses anti-overdose drug’s maker on price hike"