At a recent Brattleboro meeting that included social workers, educators, legislators and others, the problem was summed up in four words: “a system under stress.” 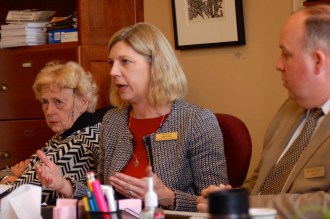 There were suggestions for improvements and discussions of bright spots, including an innovative outreach program at one Brattleboro elementary school. But there was no getting around the scope of the predicament, which is fueled in part by addiction and mental health issues.

“We have a real problem, and it’s tough to figure out what kind of multipronged approach that we need to support these children and their families and the schools,” said state Sen. Becca Balint, D-Brattleboro.

On their way into a conference room at the Brattleboro Retreat on Nov. 14, Balint and others filed past stacks of printouts documenting alarming trends. Most notably, one report showed that the number of children in foster care in Windham County stood at 101 at the end of September 2015 and 146 one year later.

By the time the meeting convened, officials said that number had climbed closer to 160.

Also, 93 children were removed from their homes in Windham County and placed in foster care between October 2015 and September of this year. Taking population figures into account, that’s a placement rate that’s nearly double the statewide average.

Of those 93 children, 69 were taken into state custody due to neglect, and 27 were removed from their homes due to a caretaker’s drug or alcohol abuse.

State Rep. Emily Long, D-Newfane, said she was “pretty shocked” by the number of juveniles in the custody of the Department for Children and Families. “That is another indicator that we are not adequately addressing the growing issues around mental health, addiction and poverty that families are dealing with today,” Long said after the forum. 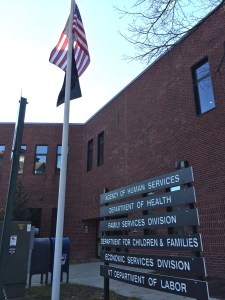 The state Department for Children and Families’ Brattleboro office is straining under a drastically increased caseload, officials say. Photo by Mike Faher/VTDigger

There was no clear explanation for the increase, though it’s clear the state’s opiate abuse problem is playing a role. Jody Mattulke, a social worker at Brattleboro’s Academy School, said substance abuse is “pretty pervasive” in the region and is a “major factor” in families’ struggles.

Veteran social worker Lisa Keller, a supervisor in the DCF’s Brattleboro office, said drug use is part of it. But she pointed to other, more long-standing problems.

In some cases, problems are passed down from generation to generation. “We’re serving now the children of the kids that I had served in custody when I was a social worker,” Keller said.

The impacts are being felt at Keller’s office, which — like other DCF offices across Vermont — is straining under an increasing caseload.

“The workload is beyond anything I could ever imagine, and I am doing my worst work with my community partners — not returning phone calls, not returning emails because I’m trying to put out fires,” Keller said.

“There’s very little rest,” she told the audience. “But you all are working way above and beyond. So thank you all.”

There aren’t enough foster parents to go around, either. And those who take on that role sometimes are so overwhelmed that they return a child to DCF.

When that happens, Keller said, “I want to be angry, but I get it.”

Corey DiMario, a Brattleboro foster and adoptive parent, is well aware of the difficulties inherent in foster care placements. “I think it’s important to keep in mind the huge amount of stress that the kids and the families are under,” he said.

At the same time, though, Keller pointed to DiMario as a positive example of a family that has “hung in there.” DiMario said he and his wife have a son who was first placed with them at age 3 via DCF after experiencing “severe neglect and trauma in the first few years of his life.”

Four years later, “he’s doing really well,” DiMario said. “It’s been a lot of work, but he’s coming into his own now in his seventh year.” 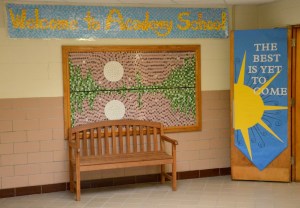 The front entrance at Academy School, a Brattleboro elementary school where a social worker meets families in their homes to work through problems. File photo by Randolph T. Holhut/The Commons

Another positive cited at the session was Mattulke’s work at Academy School, where she holds the title of family engagement and education coordinator.

Instead of functioning as a traditional guidance counselor within school walls, Mattulke meets families in their homes to try to work through problems. This “really helps a lot of families who have transportation stress,” she said.

Mattulke can get involved in major issues: She cited one instance, for example, of working with DCF on a neglect case. But in other instances, she may simply be offering help in finding programs or filling out paperwork.

“I’m getting into the homes, and we’re just really trying to find the resources that can help the families,” Mattulke said.

Officials in Windham Southeast Supervisory Union also are trying to help students get to school and stay there. The increase in familial turmoil and foster care placements hasn’t yet spurred an uptick in absenteeism. “I think, as this plays out, it will,” said Superintendent Ron Stahley.

There’s much more at stake than student attendance numbers. “We know that absenteeism leads to low achievement, and it’s a strong predictor of whether a student will drop out of school,” said Balint, who has worked as a teacher.

To try to address the issue proactively, Windham Southeast has an attendance council that meets regularly. In addition to educators, the council includes representatives of organizations like DCF, Youth Services, United Way of Windham County and the Windham County state’s attorney’s office.

“We have some great community partners,” Stahley said.

The Nov. 14 discussion ended with several suggestions for improvement. Those included placing more emphasis on early intervention and prevention measures for young children and families, as well as more peer support for struggling families.

Drawing from his own experience, DiMario called for better education among social workers, teachers, attorneys and others about the effects of trauma on children’s behavior.

With at least seven state lawmakers attending, some are hoping the discussion leads to policy debates in the upcoming legislative session. There were, Stahley said, “some really concrete examples of things we can work on. It’s not just all about funding.”

Thanks for reporting an error with the story, "Windham County foster care numbers cause worry"