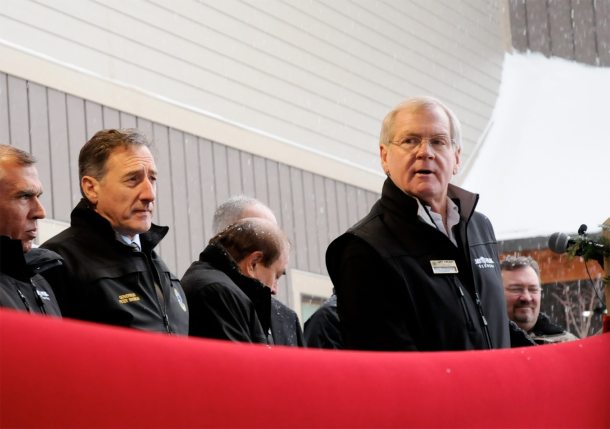 The state of Vermont has released heavily redacted records to VTDigger in response to a request for documents related to the status of the Vermont EB-5 Regional Center and state oversight of EB-5 projects in the Northeast Kingdom that regulators say is part of a “Ponzi-like” scheme.

The documents that are not redacted shed little new light into questions raised by the U.S. Citizenship and Immigration Service about Vermont’s EB-5 program and the role state officials played in overseeing the $400 million-plus developments in Newport, Jay and Burke.

In April, the Securities and Exchange Commission charged the developers of the projects with misusing $200 million in immigrant investor funds. It is the largest alleged fraud case ever in Vermont and in the history of the national EB-5 program.

VTDigger sued over the records in October, arguing that the public has a right to know the status of the EB-5 regional center in light of the federal inquiry.

The news organization received the documents a little after 4 p.m. Friday. Of the 131 pages provided, 43 are redacted in whole, and another 10 are partially redacted.

VTDigger is continuing to seek access to the redacted documents through a lawsuit filed last month in Washington County Superior Court against the state of Vermont.

“The state’s response is unacceptable,” said attorney Tim Cornell, lead counsel for the case on behalf of VTDigger and its parent organization, the Vermont Journalism Trust. “We are sorry that we need to continue to litigate to force the State to turn over documents the public, by all rights, should see.”

The Vermont chapter of the American Civil Liberties Union joined VTDigger in pursuit of the records through the lawsuit late last month, with Lia Ernst, an attorney with the organization, serving as co-counsel.

The dispute over the records began in August when VTDigger requested communication over a period of seven days between state Agency of Commerce and Community Development, including the Vermont EB-5 Regional Center, and U.S. Citizenship and Immigration Services.

USCIS had asked the agency to respond to questions about its oversight of EB-5 projects through the regional center.

The state denied the news organization’s request in late August, claiming the litigation hold exemption in Vermont’s Public Records Law. The attorney general’s office contends the documents need to be kept private due to the possibility they could become part of the state’s lawsuit against Jay Peak developers Ariel Quiros and Bill Stenger.

VTDigger argues that the documents are irrelevant to the state’s case against Quiros and Stenger.

The news organization says the state is improperly using the litigation hold to avoid accountability.

“Using the cloak of the litigation exception to the Public Records Act, the State of Vermont has denied all access to these records, citing its litigation against the Jay Peak enterprises and Ariel Quiros and William Stenger,” Cornell writes in the lawsuit. “As a legal matter, these records could not be discoverable by the defendants in that action because they are not in any way relevant to that litigation.

Officials with the Vermont EB-5 Regional Center were charged with overseeing the Jay Peak resort developments.

Documents VTDigger previously obtained from the state show that in 2012, a former business partner and others raised questions about financial irregularities at Jay Peak.

Despite those red flags, high level officials, including Sen. Patrick Leahy, D-Vt., Gov. Peter Shumlin and Rep. Peter Welch, D-Vt., went on to promote Jay Peak projects overseas and at press events in Vermont. In 2013, Shumlin appeared in a promotional video produced by Alex MacLean, his former chief of staff who went on to manage investor relations and projects at Jay Peak. In the video, which Stenger distributed to foreign investors, the governor promised that the projects were “audited.” Shumlin later said he “misspoke.”

During this period, regional center staff did not require the Jay Peak developers to submit quarterly reports as mandated under agreements with the state. Officials with the regional center later ignored complaints made by investors in the Tram Haus Lodge about Stenger and Quiros seizing ownership of the hotel without their knowledge or consent. In October 2014, VTDigger wrote about state officials’ cozy relationship with Stenger, the president of Jay Peak.

Last year, the Vermont Attorney General, Bill Sorrell, put state records about the Jay Peak projects on litigation hold. The state, however, continued to release documents to news organizations until April 14, 2016, when state and federal officials brought charges against Stenger and Quiros. At that time, Sorrell said no more records would be disclosed to the public until after the state and federal litigation is completed. Sources have said it could be five years before the fraud cases are concluded.

Since then, federal officials have raised questions about state oversight of the EB-5 program.

U.S. Citizenship and Immigration Service asked the state agency to respond to an inquiry in August. The questions asked by USCIS, and the state’s answers to those questions have not been made public.

Patricia Moulton, former secretary of the Agency of Commerce and Community Development, refused to talk about the federal inquiry in any detail and rejected requests for documents. It is not known whether the Vermont EB-5 Regional Center has been censored in any way or if the program has been suspended. 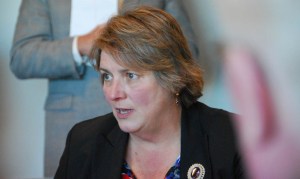 Secretary of the Agency of Commerce and Community Development Pat Moulton. Photo by Erin Mansfield/VTDigger

VTDigger alleges that the Shumlin administration has improperly withheld correspondence between key members of the administration and federal officials about the status of the Vermont EB-5 Regional Center.

Gov. Peter Shumlin, a Democrat, is leaving office at the end of December. The governor’s office has also refused to release metadata for all of former chief of staff Alex MacLean’s email correspondence unrelated to the EB-5 program and Jay Peak.

Republican Gov.-elect Phil Scott, who takes office in January, has said he is interested in establishing a more transparent EB-5 program.

USCIS officials have not responded to questions about their inquiry.

Following the state’s denial of requests to provide records related to the Vermont EB-5 Regional Center and the inquiry from USCIS, VTDigger filed its lawsuit, asking a judge to order the release of the documents.

“By issuing a blanket denial to access to records pertaining to the state’s administration of the EB-5 program, the state is essentially roping off an entire sector of its administration and shielding it from any public scrutiny,” the lawsuit states.

Assistant Attorney General Jon Alexander submitted the state’s response to the lawsuit earlier this month, reiterating the exemptions under the law that he says allows the requested documents to remain private.

Alexander wrote that the “State of Vermont prays that judgment be entered in its favor dismissing Plaintiff’s complaint and awarding the state its costs, attorneys fees, and such other relief as the court may deem appropriate.”

The same day the state filed its answer, Lucy Leriche, interim secretary for the Agency of Commerce and Community Development, wrote a letter to the attorneys for VTDigger saying she was reconsidering the agency’s denial from September of the news organization’s public records request.

Leriche wrote that two Chinese investors in the Burke Mountain hotel project who had sued the state Department of Financial Regulation, among many other parties, had dismissed their lawsuit.

That decision in mid-September by the brother-and-sister investors, Minggan and Zhao Wei, prompted the state to take another look at the requested records and whether the same exemptions applied.

Leriche did not deny VTDigger’s initial public records request. She took the top job at the agency following that decision, which was made by then-Secretary Moulton.

In the letter stating the reconsideration, Leriche wrote that she would provide an answer by Friday, Nov. 18. Late that afternoon, Goldstein, of the state Department of Economic Development, emailed VTDigger with the heavily redacted documents.

“The pending litigation redactions are relevant to the State’s enforcement action against Ariel Quiros, William Stenger and others – which is still pending in the Washington Superior Court,” Goldstein wrote.

VTDigger on Friday evening emailed the state, challenging the redactions under a provision of Vermont’s Public Records Law that allows a party to appeal a denial or redaction decision to the agency head. The state has five business days to respond.

The documents that were released provide basic background information on the Vermont EB-5 Regional Center and projects it has overseen, outside of the ones headed by Stenger and Quiros.

The unredacted documents show that the state gave USCIS previously reported information about actions taken by the state to beef up oversight of EB-5 projects by the Department of Financial Regulation in wake of the allegations against Stenger and Quiros.

Almost no mention of the Stenger and Quiros projects is included in the unredacted documents.

“The (Vermont Regional Center) has promoted economic development in the State of Vermont and continues to do so, notwithstanding the issues that have arisen with the Jay Peak projects,” the response from ACCD to USCIS states in one of the few references to the EB-5 scandal in Vermont.

The response continued, “The (Vermont Regional Center) understands that the Jay Peak matters have cast a shadow on the EB-5 program in Vermont, but that shadow should not diminish the project completions that have occurred.”

Thanks for reporting an error with the story, "State releases redacted EB-5 documents; VTDigger fights on"