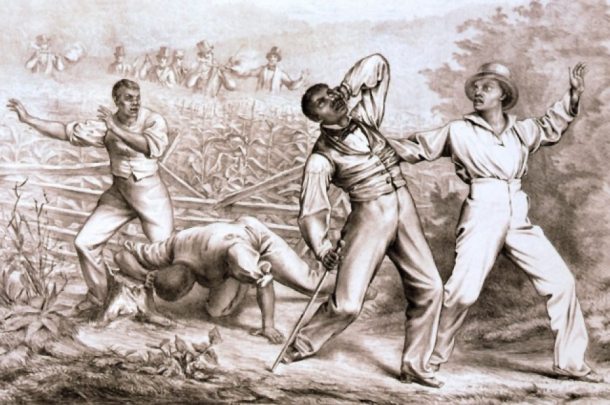 “Then Again” is Mark Bushnell’s column on Vermont history.

[V]ermonters were up in arms. They believed Congress, by caving in to the Southern slave states, had just struck a deal with the devil. The Vermont Legislature responded quickly and aggressively, passing a state law to make certain federal laws null and void within the state’s boundaries.

Vermont’s so-called Habeas Corpus Law of 1850 is largely forgotten today. Perhaps that’s because cataclysmic events during the run-up to the Civil War have overshadowed it. At the time, however, the Vermont law ratcheted up national tensions over slavery. The president even threatened to take military action against the state if it tried to thwart the federal government.

The congressional deal that riled Vermonters became known as the Compromise of 1850. It allowed California to enter the union as a free state and abolished the slave trade in the District of Columbia. Vermonters, who by the mid-1800s had become staunchly anti-slavery, cheered those parts of the deal.

The compromise, however, also contained significant victories for slavery’s supporters. It stated that people could still be held as slaves in the District Columbia. The district was under federal jurisdiction, so this represented the federal government authorizing slavery. The compromise also left unanswered the question of whether Utah and New Mexico would eventually enter the union as free or slave states.

But Vermonters found the most galling part of the compromise to be the strengthening of the Fugitive Slave Act, which required Vermont law enforcement officials to help capture people who had escaped slavery and return them to their “masters.” Officers were subject to hefty fines if they failed to cooperate. The law also compelled “all good citizens,” by which it meant everyone, to help capture runaways. Anyone caught sheltering or feeding a runaway could be subject to a large fine and jail time.

All it took for a person to be labeled a runaway slave was for someone to provide sworn testimony to that effect. In reality, slave hunters sometimes falsely claimed that free African-Americans were runaways. The law provided no legal recourse for someone captured as an escaped slave.

The Compromise of 1850 was passed in a series of laws, the last being enacted in late September that year. For weeks, Americans braced for conflict, particularly over the Fugitive Slave Act, which political observers expected some Northern states would try to nullify. U.S. Sen. Daniel Webster, of Massachusetts, who had helped broker the compromise, spoke out against “Legislatures of the North” which had a “disinclination to perform, fully, their constitutional duties” to help return runaway slaves.

On Nov. 5, the proslavery Richmond Whig and Public Advertiser newspaper in Virginia issued a veiled threat that once one or more states acted to nullify the law, “some ample mode of redress will be chosen, in which the South with entire unanimity will concur.” In other words, the South would retaliate.

Vermont lawmakers’ reply was blunt. On Nov. 13, they passed the Habeas Corpus Law, which made it nearly impossible to enforce the federal law in Vermont. The action was highly provocative and turned the tables on the South by using a legal tactic that a slave-owning state had tried nearly two decades earlier.

In 1832, South Carolina lawmakers had attempted to block federal tariffs they said promoted Northern interests at the expense of the South. President Andrew Jackson threatened to deploy troops to the state to enforce the tariffs. Though Jackson never had to follow through on his threat, the standoff proved significant. Embedded in South Carolina’s action was a claim of states’ rights, which Southern states implicitly threatened to assert to reject any future federal law limiting slavery.

This sort of claim, that a state can block federal action, is known as nullification. It dates back to an argument by Thomas Jefferson in 1798. He claimed that states could ignore the Alien and Sedition Acts, which severely restricted civil liberties in the name of national security, because the Constitution hadn’t specifically given the federal government the right to take such actions.

Contrary to the federal law, Vermont’s Habeas Corpus Law required state’s attorneys to “use all lawful means to protect, defend, and procure to be discharged” anyone who had been “arrested or claimed as a fugitive slave.”

“Habeas corpus,” which is Latin for “you may have the body,” is an ancient legal principle intended to prevent people from being imprisoned illegally. Under the Vermont law, the state’s attorneys of each county had to bring any alleged runaway slave before a judge. If the judge failed to release the accused, the defendant had the right to a trial by jury, with the state covering the costs.

The Vermont law threatened to do more than just slow the return of fugitive slaves. In reality, given the public’s sympathies, any alleged runaway brought before a Vermont judge or jury had a good chance of being freed.

The Daily National Intelligencer of Washington, D.C., attacked the Vermont law. “We are mortified and astonished,” the editors wrote, “that such an enactment should not only have received the concurrence of the Legislature, but the sanction of the Governor.”

If they had known the governor, they would have been less surprised. Gov. Charles Kilborn Williams, a former chief justice of the Vermont Supreme Court, was an ardent abolitionist. He once wrote that if slavery were recognized by law, “it is an unchristian law and one that violates the right of nature.”

President Millard Fillmore was outraged with Williams and the Vermont Legislature. “(T)he president and the entire Cabinet are very much exasperated at the course of proceedings in the Vermont legislature,” reported the Memphis Daily Eagle, “and … they determined to enforce the fugitive slave law in Vermont, should a case arise there, if it required the whole military force of the United States to do it.”

The Albany Argus saw Vermont’s action as a dangerous escalation of tensions. “Vermont has begun the work — South Carolina may follow,” the paper wrote. “What state will next step into the arena, and nullify another part of the constitution? If this work is to go on, where will the end be? What will become of the constitution or law, or of the Union itself?”

The answer to that question came a decade later. In December 1860, South Carolina became the first of the Southern states to secede from the union. The sectional dispute, which had been fought through conflicting laws, finally erupted into a shooting war on April 12, 1861, when Confederate troops fired on Fort Sumter, a federal citadel in South Carolina.

Thanks for reporting an error with the story, "Then Again: Fighting back against federal government"

Construction of recovery facility in Essex hailed as ‘long overdue’