Editor’s note: This commentary is by Doug Hoffer of Burlington. Hoffer is Vermont state auditor but the views expressed here are his own.

This is true, but misleading. Workers are part of the labor force, which consists of those who are working and those who are unemployed but want to work. The issue is that counting workers is not the same as counting jobs. 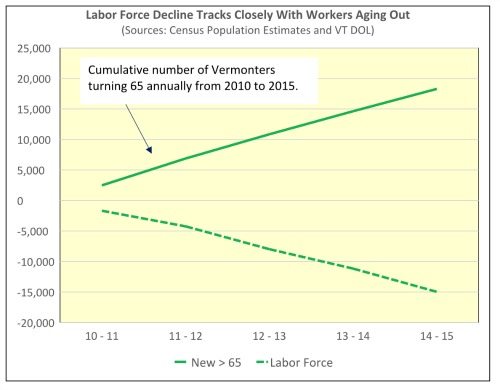 While the labor force dwindled, we added over 15,000 new jobs (Vermont Department of Labor, see below). Thus, a shrinking labor force and increased jobs are not mutually exclusive and to focus on the labor force while ignoring jobs misrepresents the facts and the complex reality of the labor market. 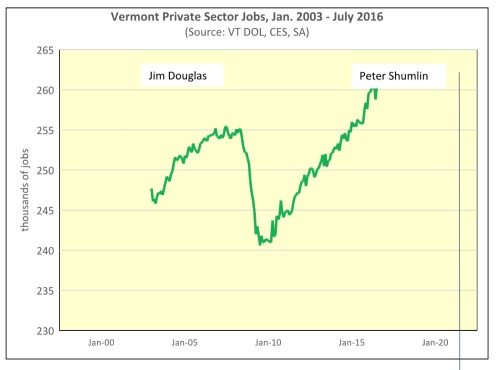 Unfortunately, Mr. Scott doubled down on his misleading statement when he asserted in his economic development plan that the decline in the workforce “amounts to a loss of about $750 million in potential wages.” When working Vermonters retire they are replaced by other workers so there is no loss of wages. Moreover, the addition of 15,000 new jobs resulted in hundreds of millions in new wages.

Mr. Scott also said that “our economy is growing too slowly.” Concern about the sluggish recovery from the Great Recession is understandable, but it’s not unique to Vermont. Job growth is below the U.S. average in all New England states (see below). 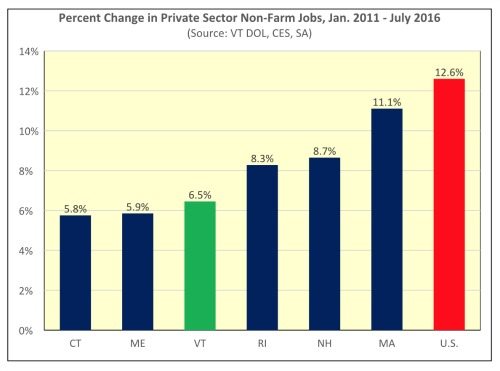 Other measures illustrate the national scope of the problem. For example:

And it’s important to acknowledge that states are at the mercy of powerful forces such as the federal budget, interest rates, trade agreements, currency exchange rates and cheap labor overseas.

• Percent change in per capita GDP, 2010-2014 (U.S. Department of Commerce, latest available): By this measure, most of the country is struggling. Ten states were negative (including four that have no personal income tax) and 35 are below the U.S. figure, including Vermont. Even New Hampshire, which benefits from the Boston metro area, is well below the U.S. figure.

On the other hand, not all of the news is bad. For example:

• Net tax-supported debt as a percent of personal income (Moody’s): At 2.1 percent, Vermont is better than 30 other states. Moreover, Vermont is one of only 15 states with Triple A credit ratings from at least two of the three ratings agencies.

• Bankruptcies per 1,000 residents, 2015 (American Bankruptcy Institute): Vermont is third lowest in the country.

This is not the story told by those (like Mr. Scott) who would have us believe that Vermont is an economic basket case and that it’s impossible to do business here. We have problems, but we’re not alone.

And it’s important to acknowledge that states are at the mercy of powerful forces such as the federal budget, interest rates, trade agreements, currency exchange rates and cheap labor overseas. These are beyond the reach of state policy, regardless of which political party is in power.

So let’s have a wide-ranging conversation about the economy, but let’s make sure it’s based on all the facts, not just those that tell one side of the story. And let’s talk more about real proposals for the future rather than sound bites. There’s too much at stake for anything less.

Thanks for reporting an error with the story, "Doug Hoffer: Facts matter — jobs and the economy"