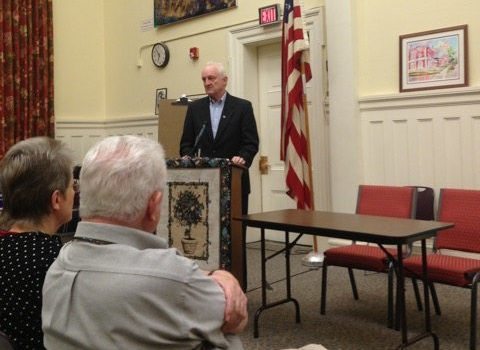 [P]hilip Haney, a former member of U.S. Customs and Border Protection and an outspoken critic of U.S. immigration policy, told an audience in Rutland on Tuesday that “progressive leftists” and Muslim extremists are seeking to alter or abolish the Constitution.

Rutland First, a group opposed to the potential resettlement of refugees in the area, organized the event. It included a presentation by James Simpson, a former analyst for the White House Office of Management and Budget and the author of “Red Green Axis: Refugees, Immigration and the Agenda to Erase America.”

Earlier in the day about a dozen members of Rutland First held a rally downtown protesting refugee resettlement and calling on Mayor Chris Louras to resign. Louras has been criticized as insufficiently transparent about the plan to bring as many as 100 refugees from Syria and Iraq to Rutland.

Don Chioffi, a member of Rutland First, said he reached out to Haney after watching a webinar Haney had done with Simpson. “(Haney) really thinks that Rutland is a unique situation especially in terms of the secrecy with which (the U.S. Committee for Refugees and Immigrants) has approached the city,” Chioffi said.

Haney told the Rutland audience that the Muslim Brotherhood had infiltrated the U.S. government. And in testimony before Congress in June, Haney said, “The threat of Islamic terrorism does not just come from a network of armed organizations such as Hamas and ISIS, who are operating ‘over there’ in the Middle East. In fact, branches of the same global network have been established here in America, and they are operating in plain sight.”

Simpson, who spoke in Rutland in May, said Tuesday that refugee resettlement and immigration threaten the integrity of the United States. He added that refugees pose a threat to national security and characterized the vetting process as a sham.

However, people with expertise in national security disagree.

Michael Breen, executive director of a policy nonprofit called the Truman National Security Project, said in an interview that refugees seeking to come to the United States undergo an intricate vetting process that involves nearly every arm of the intelligence and law enforcement community.

“The process is safe, and refugees are heavily vetted,” said Breen, who was a U.S. Army officer in Iraq and Afghanistan. “Refugees do not present a national security threat.”

Breen added that talk of shutting refugees out or turning them away plays into the hands of extremists. “Refugee resettlement is a critical component of our foreign policy,” he said.

Timothy Edgar, who served as first deputy for civil liberties for the director of national intelligence from 2006 to 2009, said refugee resettlement would probably be the last mechanism a terrorist group would use to get into the United States. Edgar said he’s more worried about terrorists taking advantage of the visa waiver program or simply becoming radicalized in the U.S. like the shooter who killed 49 people at a nightclub in Orlando, Florida.

“There’s a fear in the public about terrorism that’s legitimate and can be exploited by people who want to stir up trouble, and that’s what I think we’ve been seeing more and more of over the course of the past year,” Edgar said.

“The anxieties are quite legitimate,” he added. “But the solutions don’t make any sense.”

Haney, the author of “See Something Say Nothing: A Homeland Security Officer Exposes the Government’s Submission to Jihad,” has also claimed the attacks in Orlando and San Bernardino, California, could have been prevented if he’d been allowed to proceed with a 2011 investigation he had launched into Tablighi Jamaat, a small Muslim revivalist group. In his June testimony to Congress, he alleged the investigation had been ordered shut down.

His claims have been widely circulated on conservative websites such as InfoWars, World Net Daily and CounterJihad.

However, the Pulitzer Prize-winning website Politifact said such claims could not be corroborated. According to Politifact, the Department of Homeland Security has a small intelligence-gathering wing — the Office of Intelligence and Analysis — but otherwise does not have jurisdiction to gather information or investigate cases. That is the purview of the FBI.

According to a DHS spokesperson, in 2003 President George W. Bush ordered the creation of the Terrorist Screening Center, a centralized system for tracking people “who are known to be suspected of involvement in terrorist-related activities.” The spokesperson said personnel with U.S. Customs and Border Protection — part of the Department of Homeland Security — are not permitted to independently create terrorist watchlists but can nominate people they believe should be monitored.

In August 2014 The Intercept revealed that the number of people in the terrorist screening system had expanded dramatically under the Obama administration. According to classified documents obtained by The Intercept, 680,000 people were in the government database. One of the most frequently targeted cities was Dearborn, Michigan, which has the largest percentage of Arab-Americans in the country.

Haney, who studied Arabic while working as an entomologist in the Middle East, switched careers after 9/11. “Overnight I changed,” Haney said. He joined the newly created Department of Homeland Security and in 2003 became an agent with Customs and Border Protection. Haney retired in 2015.

He describes his specialty as the “strategy and tactics of the global Islamic movement.”

Several days before traveling to Rutland, Haney spoke at Act for America’s annual conference as part of a segment on refugee resettlement. Act for America is a conservative nonprofit that has promoted bills banning Sharia law in the United States and trains citizens to “help protect and preserve American culture.”

Correction: The Terrorist Screening Center was not established by President Barack Obama. George W. Bush was president in 2003 when it was created.

Thanks for reporting an error with the story, "Guest speaker for Rutland group stokes worries about refugees"