The state Public Service Board has approved Green Mountain Power's plans to distribute $302,719 from a Nuclear Electric Insurance Limited fund to various projects around the state.

The power company once had an ownership stake in the Vernon plant and is entitled to long-term proceeds related to insurance coverage, with a state mandate to allocate a significant portion of that money for development and use of renewables. 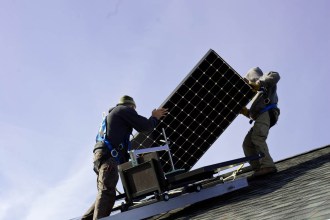 “We are thrilled to be able to support a variety of community renewable energy projects with these funds,” said Green Mountain Power spokeswoman Dorothy Schnure. “Supporting developing technologies is important as we move to a future where energy is generated close to where it is used, and we continue to have Vermont as a leader in energy transformation.”

Entergy now owns Vermont Yankee and is making preparations for decommissioning the plant after stopping power production at the end of 2014.

But before 2002, the facility was owned by Vermont Yankee Nuclear Power Corp. Both Central Vermont Public Service Corp. and Green Mountain Power had ownership shares in that company, and each entity received a portion of the proceeds from Entergy's purchase of the plant. GMP has since taken over CVPS.

When the state Public Service Board approved the plant's sale to Entergy, officials also noted that Vermont Yankee Nuclear Power Corp., which remained in existence, likely would continue to receive money from various sources. That included future refunds from the investments of Nuclear Electric Insurance Limited, which provided coverage for Vermont Yankee.

Earlier this year, the money benefited solar development statewide as well as a small hydroelectric system in Waterbury.

A PSB order dated Aug. 19 shows how the latest round of funding will be used:

• The largest portion — $152,719 — will boost the GMP Renewable Development Fund “to support the development of electric generation fueled by anaerobic digesters.”

Green Mountain Power already is in that business via its Cow Power program, which encourages farmers to turn cow manure into electricity via digesters that produce methane gas.

• In a similar vein, $75,000 will help fund work on “a unique algae culture system integrated with a dairy farm-based anaerobic digester system.”

• The Montpelier-based Vermont Energy Education Program will get $30,000 for its renewable energy programs in elementary, middle and high schools.

That money will fund initiatives including green energy career workshops for high school students and career and technical education classes; “renewables by design” workshops for students in fourth through eighth grades; educational kits supplied to schools at reduced cost; and support and training for teachers.

Given Vermont’s long-term renewable energy goals, “you have to be thinking about today’s students, who will be the coming generation of energy users and decision-makers,” said Andrew Shapiro, the Vermont Energy Education Program’s director of science and engineering education.

• The final $45,000 will go toward installation of residential solar systems in the city of Rutland's northwest section.

Rutland Mayor Chris Louras said the new solar funding is yet another example of the ongoing collaboration between the city and Green Mountain Power as part of Rutland's Project Vision revitalization effort.

“We were awarded a Vermont Community Development Program grant of $1.25 million to remediate blighted conditions and encourage low-moderate income homeownership through our housing partner, NeighborWorks of Western Vermont,” Louras said. “These solar projects will make homeownership more affordable in a neighborhood that has seen over $5 million in public/private investment including GMP's Rutland Blooms tree, flower and community garden-planting initiatives.”

Thanks for reporting an error with the story, "Vermont Yankee fund benefits Rutland solar, other projects"