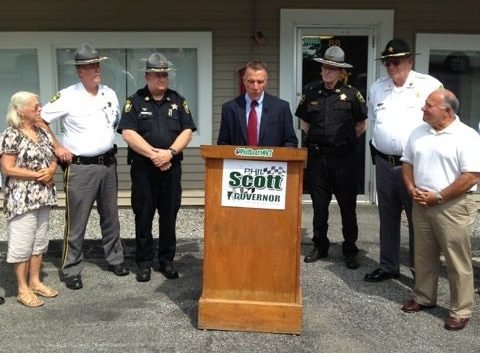 Gubernatorial candidate Phil Scott presents his plan for addressing Vermont’s opiate addiction problems Tuesday in Rutland, where he was joined by members of the Vermont Sheriffs’ Association. Photo by Adam Federman/VTDigger

Republican gubernatorial candidate Phil Scott drew an explicit connection between crime and drug addiction Tuesday as he announced his plan to address opiate abuse in Vermont.

He made the announcement after receiving the endorsement of the Vermont Sheriffs’ Association, a group that generally doesn’t come out in favor of candidates in political races.

“One of the underlying drivers of crime in Vermont is addiction,” Scott said, flanked by members of the association at a downtown news conference a week before the primary. “My plan will build on the progress we’ve made as a state and on the models that have proven successful.”

Vermont Sheriffs’ Association President Bill Bohnyak said the decision to endorse Scott was not unanimous but that the majority of the state’s 14 county sheriffs united around him. According to Bohnyak, the association does not normally endorse candidates because that has caused tension in the past.

Scott’s 10-point plan includes the naming of a senior-level director of drug abuse prevention policy; creation of an interagency council to coordinate efforts between state and local governments; and the expansion of treatment options.

Scott said his top priority would be expanding community involvement in dealing with drug addiction. “We must acknowledge that one size does not fit all,” he said. “In my administration, every state agency will be directed to respond immediately to the drug abuse prevention, treatment and enforcement needs of a community.”

He singled out Rutland’s Project Vision as an example of how to address the issue with a community-led effort in concert with law enforcement. Project Vision is widely credited with driving down drug-related crime in Rutland and has served as a model for other towns and cities dealing with the same problem.

Scott said the success of Project Vision should be replicated at the statewide level. He said this would be the primary task of the Opioid Coordination Council, which he would establish by executive order on his first day in office. The council would be co-chaired by a mayor, the public safety commissioner and the secretary of human services. Other members would be selected from a cross section of state agencies as well as the Vermont Sheriffs’ Association and the Vermont Association of Chiefs of Police.

In addition, he said he would convene an annual statewide summit on drug abuse prevention that would bring together local stakeholders and government officials. “This isn’t something that can be solved in Montpelier,”  said Scott, the lieutenant governor.

Rutland Mayor Chris Louras said Scott has been engaged with the issue from early on and was one of the first state officials to attend one of Project Vision’s regular information-sharing meetings involving police a couple of years ago.

But Louras also said one of the biggest lessons learned in Rutland is that the response to the opiate crisis needs to be initiated at the local level. Project Vision may be a model, but that doesn’t mean it is the answer for every town in Vermont. “Clearly whether it’s the governor or lieutenant governor or Legislature, they cannot control, manage or direct local assets in the most effective way possible,” Louras said.

The number of people seeking treatment for opiate addiction in Vermont has increased over the last couple of years in nearly every county, according to the Department of Health. Vermont has been recognized by the National Safety Council as one of only four states to make progress on prescription opiate overdoses, but the state still faces major challenges. A recent Vermont Public Radio poll found that opiate addiction remains a high-priority issue for a majority of Vermonters.

Until Tuesday, Scott’s campaign had not issued any policy statements on the opiate crisis. His challenger in the Aug. 9 primary, Bruce Lisman, has a nine-point plan on his website that calls for increasing funding for intervention programs, strengthening mental health infrastructure and expanding integrated family service pilot programs.

Thanks for reporting an error with the story, "Scott unveils opiate response plan with sheriffs behind him"

As state officials investigate school-based virus cases, who is considered a close contact?