PHILADELPHIA — Delegates to the Democratic National Convention ratified a proposal Monday for a “unity reform commission” to change the superdelegate process. The resolution, which was passed at Saturday’s Rules Committee meeting, was the result of intense negotiations between backers of Hillary Clinton and Bernie Sanders. 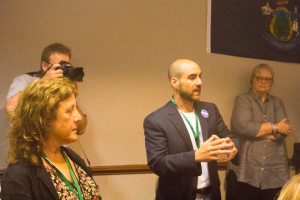 Anthony Iarrapino, Vermont’s standing committeeman to the Democratic Party’s Rules Committee, urges members of the Vermont delegation to vote in favor of a “unity reform commission” resolution regarding superdelegates. Photo by Liora Engel-Smith/VTDigger

The resolution calls for the creation of a 21-member commission to include backers of both Clinton and Sanders. It will issue recommendations on reducing the number of superdelegates by two-thirds, so that only elected officials will maintain their superdelegate status.

The resolution also envisions the creation of a new class of superdelegates, which will include non-elected officials within the Democratic Party. These new superdelegates will be selected, not elected for the role, but they will have to vote according to popular votes in their respective states.

Iarrapino said this new class of superdelegates will reward “those who work hard in between elections, year in and year out, to make the Democratic Party stronger.”

The commission is to complete its report by the beginning of next year.

At Saturday’s meeting Sanders supporters tried to introduce four other amendments related to superdelegate reform before the unity commission resolution passed. Although each of these resolutions received enough votes to bring a debate to the floor, Iarrapino said Sanders backers chose not to debate any of them.

“We had won a significant compromise from the Clinton campaign, and at the same time, there was no need to send a minority report that said, ‘We don’t think we won,’” he said.

Thanks for reporting an error with the story, "UPDATED: Superdelegate reform to create new class of delegates"