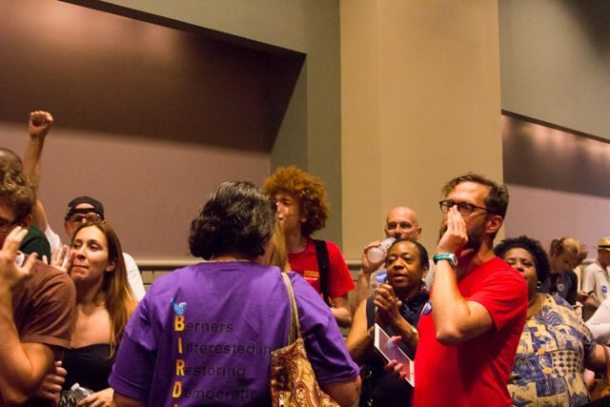 Outside the Rules Committee meeting, dozens of people chanted “No more superdelegates!” The Rules Committee was supposed to be open to the public, but there weren’t enough seats to accommodate everyone. Photo by Liora Engel-Smith/VTDigger

[P]HILADELPHIA— In a major victory for Sanders backers, Democrats passed a resolution that will likely dilute the power of superdelegates in the next election cycle. It is the most significant revision of the superdelegate system since its inception in 1984.

The amendment, called the “Unity Reform Commission,” was introduced Saturday evening in the DNC Rules Committee meeting. It will reduce the number of superdelegates by two-thirds. Sanders supporters had previously introduced four failed amendments — the most radical of which would have abolished superdelegates altogether — but each resolution was defeated by a wide margin.

Clinton and Sanders backers dug in their heels. Aaron Regunberg, a state representative from Rhode Island, previously announced in a press conference that he would introduce the most radical amendment on the floor. 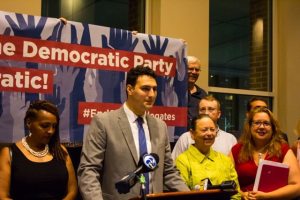 State Rep. Aaron Regunberg, D-Rhode Island, and his backers held a press conference before the Rules Committee meeting at the Pennsylvania Convention Center. Regunberg’s amendment did not pass. Photo by Liora Engel-Smith/VTDigger

“We want to make sure that in future nominating contests it is one person, one vote,” Regunberg said. “That there is not a group of elite, well-connected few who can overturn the popular will of the people in our party.”

Detractors said the change should only be considered after the Democratic National Convention.

“I am fully aware of those who are concerned about the superdelegate process, but I’m also aware about the issues of diversity and the balance that superdelegates have given it,” Jackson Lee said. “My fellow delegates, we must hear voices that are not in this room today. That is the democratic way.” Jackson Lee is a superdelegate.

With each failed resolution, tensions rose. Sanders backers wanted to block lobbyists from becoming superdelegates. They tried to prevent DNC chairs from becoming superdelegates. They wanted to tie superdelegate votes to state popular votes. All of these failed resolutions garnered at least the threshold 47 votes, meaning Sanders backers can file a minority report for each and bring the debate to the convention floor. 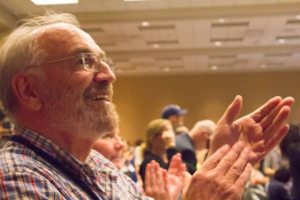 Committee members cheer the Unity Reform Commission resolution. The resolution was a result of a 2-hour negotiation session. Photo by Liora Engel-Smith/VTDigger

Inside the room, Sanders supporters chanted “Shame!” Clinton supporters countered with “Unity” chants. Outside the meetings, dozens chanted “No more superdelegates!” and “Open the doors!” Their voices carried into the room.

When it was clear that Sanders and Clinton backers were at a stalemate, the meeting broke for a two-hour recess during which private negotiations took place.

The Clinton and Sanders supporters who emerged from the negotiations left the meeting united, and both sides praised the resolution on the floor and called for unity.

“The supporter of Bernie Sanders have risen up across this county,” said Paul Feeney, a Sanders supporter and committee member from Massachusetts. “They’ve acted up, not to demand a new party but to make the Democratic Party even better. That’s what we’re doing with this amendment. That’s what we’re doing with this revolution. That is also an evolution.”

But when Clinton backers spoke, Sanders supporters in the audience rolled their eyes; some sighed and murmured “no.”

“It’s always tough: someone wins someone loses. But what we do at the end of the day is we come together,” said former Denver Mayor Wellington Webb.

The amendment passed 158-to-6 vote, to enthusiastic cheers of the crowd. Since it was passed by well over a 75 percent margin, the amendment will not be debated on the convention floor.

Rhode Island State Representative Aaron Regunberg praised the resolution in a press release. “Our passionate, grassroots advocacy pulled this outcome much further towards the goal of one person, one vote than it otherwise could have been. We haven’t completely eliminated superdelegates, so this fight is not over. But a guaranteed recommendation of two-thirds fewer superdelegates is a major step,” he said.

This and other amendments from the meeting will likely be officially ratified on the convention floor Monday. 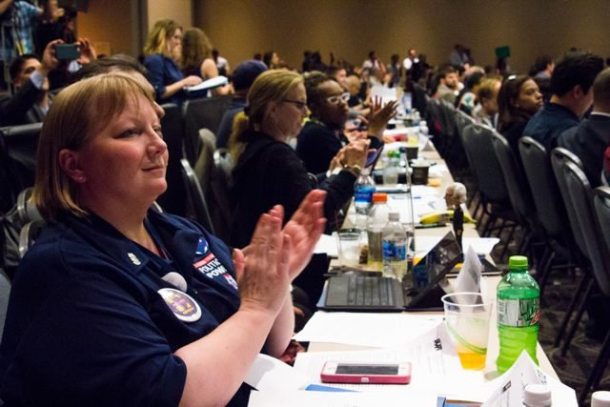 Committee members cheer the Unity Reform Commission resolution. The resolution was a result of a 2-hour negotiation session. Photo by Liora Engel-Smith/VTDigger

Thanks for reporting an error with the story, "Sanders and Clinton backers secure superdelegate reform"