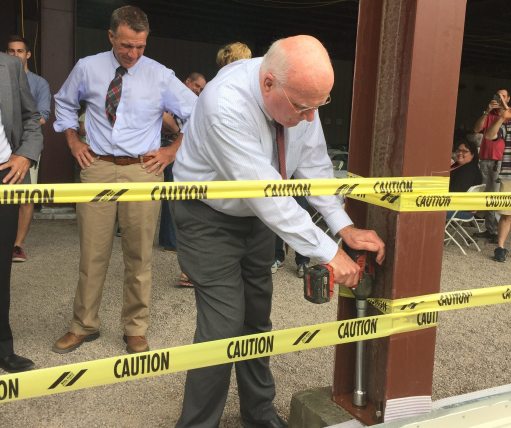 WINOOSKI — State officials spent Monday afternoon tightening some of the first bolts on a 20,000-square-foot expansion of a major scientific device manufacturer.

BioTek is expanding on its own property in the local industrial park. The expansion will help the company keep up with demand for its live cell fluorescent microscopes, which scientists often use to research new drugs.

The company has just reached $1 billion in total aggregate sales, according to President Briar Alpert. In seven years, Alpert said, the company expects to double that.

“But if not for the dedicated, creative, hardworking people who work for BioTek, we would not be here today,” Alpert said. “No one is more ingenious than the Vermont worker.” 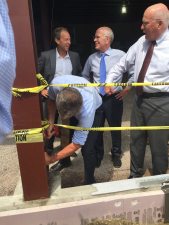 Leahy said the company cares about the men and women who work at the facility, and he vowed to keep working on legislation to help companies like BioTek get access to lending.

Alpert thanked Shumlin for consistently being able to get the company money to train its employees. “We’ve been able to go to the state of Vermont, ask for some help in training and receive some dollars,” Alpert said.

Shumlin said that when he became governor in 2011 the national economy was losing jobs. “Today, 5½ years later, BioTek is the shining example of how we in Vermont get through tough times,” Shumlin said.

Scott praised the company, saying that “economic growth is something we can all support regardless of parties.” He called BioTek proof that Vermont is “innovative by nature,” a tagline from the political action committee Vision To Action Vermont.

“They built (the company) in the Vermont way by building partnerships,” Scott said, “by treating their employees, colleagues and clients the way they want to be treated.”

Alpert said: “I feel fortunate that we have a group of elected officials that genuinely care about Vermonters today.” He then started a party for the several hundred staff members in the audience, who received bonus checks as part of the expansion.

The expansion will include more floor space to expand manufacturing for the live cell microscopes, according to Alpert, and additional room for a sales and service area.

According to the company website, BioTek’s origins go back to 1968. It went into microplate instruments in 1981.

(Correction: An earlier version of this story referred to annual sales rather than aggregate sales.)

Thanks for reporting an error with the story, "State leaders join celebration of scientific device manufacturer"

With demand for vaccines stagnant, could doses go to waste in Vermont?