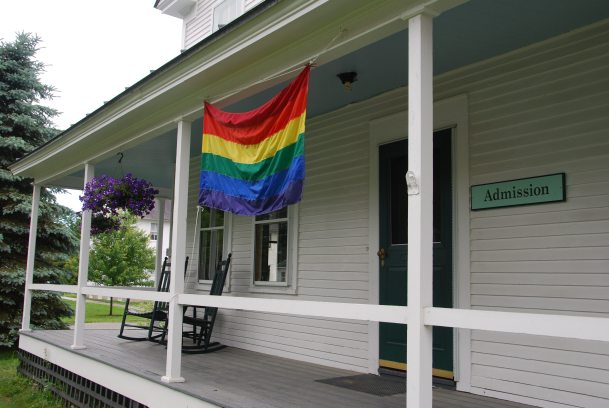 [C]RAFTSBURY COMMON — A few days after a gunman killed 49 and injured scores more at an Orlando nightclub in June, a rainbow flag went up on one of the main buildings on the Sterling College campus.

The next morning, the building was egged.

Meanwhile, an American flag, flying at half-staff outside the president’s residence in recognition of the Orlando shooting, was found torn down and stomped on the ground.

The two acts of vandalism and several other incidents involving Black Lives Matter signs have caused a stir in this idyllic Northeast Kingdom community, which features a fenced common surrounded by 19th century, white clapboard houses and is home toSterling, a small, private environmental college.

Favor Ellis, dean of community at the college, said that the proposal to put up the flag was met with no opposition at a weekly community meeting of faculty, students and staff. “It was not even a discussion really,” Ellis said. 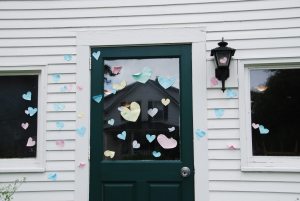 Members of the college community put up paper hearts in the spot where the building had been egged. Photo by Elizabeth Hewitt/VTDigger

“It shines a light on how important it is to hang the signs and support each other through all of our differences and all of our similarities,” Ellis said.

Christian Feuerstein, the director of communications at the college, posted about the events on Front Porch Forum, which sparked an outpouring of support from the community, she said.

Feuerstein said that the college contacted the Vermont State Police to report the vandalism, and police have been responsive.

“We are not removed from the world, we are part of the world, and unfortunately that means that some of the pushback that comes in on these issues are going to affect us here on campus,” Feuerstein said.

There have also been incidents involving Black Lives Matter signs in Craftsbury. Students, faculty and administration at Sterling put up a sign last spring near the main entrance of the college. Shortly after it was posted, it was stolen.

A more troubling incident occurred the day after Christmas. A Craftsbury resident was returning home from work in the evening when he found a 5-gallon bucket near his apartment containing a dog food bag stuffed with a bloodied, dead black cat. The bucket was left near a recently erected Black Lives Matter sign. 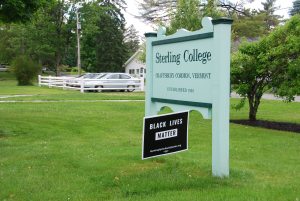 The college replaced a Black Lives Matter sign on the lawn after one was stolen. Photo by Elizabeth Hewitt/VTDigger

The couple who lived at the apartment called the Vermont State Police, but the issue was dropped. A few days later they came home to find the locks had been tampered with. They were rattled by the incidents and later moved. The couple asked that their names not be published for fear of retaliation.

“It’s too much of a coincidence that a dead black cat would be dumped on our lawn soon after putting up a Black Lives Matter sign,” the man said this week.

The incidents in Craftsbury, his partner said, are “subtle yet clear acts of intimidation.”

“I think that the climate around these issues in this town is built on silence,” she said. “It’s built on white people being silent together.”

Peggy Sapphire, a Craftsbury resident, said she is concerned there has not been a broader community response to address what she perceives to be a big problem.

“In the least expected part of Vermont, let alone the country, this little town has issues that are really quite large,” Sapphire said.

Paul Hodgdon, who owns a garage in Craftsbury and has lived in town for 52 years, said the Black Lives Matter signs are unnecessary. “The problem started as soon as the signs went up,” he said. “There were no problems before that.”

“I don’t think anybody in this town has an ill feeling toward anybody of any race,” Hodgdon said. “That’s why I don’t understand why (the signs) went up.”

Pablo Coddou, a Craftsbury resident, said the community is fairly progressive, but the incidents raise concerns about intolerance.

“Everyone in my close circle of friends is very conscious of diversity and the importance of having a community where that’s highlighted as a priority,” Coddou said.

But he added that under the surface “there definitely is some ignorance around diversity issues,” he said. “It’s white privilege to think that there’s no racism."

Thanks for reporting an error with the story, "Incidents raise questions about intolerance in idyllic Northeast King..."