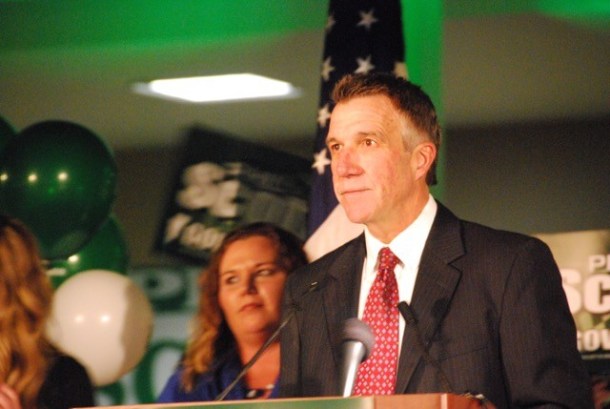 [L]t. Gov. Phil Scott pledged Thursday he would not propose or sign a state budget as governor that increased spending by more than the percentage growth in the Vermont economy the previous year.

Scott made the commitment at a news conference where he touted the support of his fellow Republican lawmakers and did his best to avoid having the discussion turn to whether his supporters would also vote for Donald Trump, the party’s presumptive presidential nominee.

Scott, who declared he would not vote for Trump, revealed later Thursday he has decided to write in former Republican Gov. Jim Douglas as his presidential choice in the November election.

Repeating his theme of affordability at the Statehouse press event, the three-term lieutenant governor said the state budget has been growing almost 5 percent a year while the Vermont economy is growing at less than 1 percent.

A construction company owner, Scott said the number of people working in the state is dropping by 2,000 a year.

“I’m running for the families and businesses who are falling behind or barely just keeping up, for the vulnerable, who are depending on us to be there for them, for the middle class, who struggle to keep pace as Montpelier takes a bigger piece of their income every year,” said Scott, who was a state senator from Washington County for 10 years prior to becoming lieutenant governor.

Scott said he has the support of 54 of the 59 Republicans serving in the House and Senate. Scott faces a primary against former Wall Street businessman Bruce Lisman. The five Republicans who didn’t sign on, including House Minority Leader Don Turner, of Milton, said they do not typically endorse candidates before a primary.

Republican lawmakers praised Scott for his honesty, authenticity and electability.

“If he’s asked a question, he knows what the politically popular position and response would be,” said Sen. Peg Flory, a Rutland County Republican and veteran lawmaker. “He doesn’t automatically issue that. He thinks about it. And when he thinks about it and evaluates it, then he gives you an honest answer that you can take to the bank. And I admire that tremendously.”

“One-party rule is not what the state of Vermont needs,” Wright said. Democrats hold the governor’s office and large majorities in the House and Senate.

Scott said he is running in part because Vermont has become an increasingly expensive place to live.

“We know there are going to be some rough times ahead,” he said. Hours later, the administration announced that preliminary April revenues were $14.7 million less than had been projected. Scott predicted next year’s budget would again be a challenge.

Several reporters tried to ask the representatives and senators if any would vote for Trump, but they, and Scott, deflected the questions and said they were there to declare their support for Scott and not to discuss presidential politics.

Wright, however, weighed in on whether Scott would be hurt by Trump’s presence on the top of the ticket or by his decision not to support the party’s presumptive nominee.

“When George Bush was extremely unpopular years ago when Jim Douglas was running for governor, (Douglas’ opponent) Peter Clavelle had a bumper sticker saying ‘Jim = George.’ Well, Jim Douglas did very well in that election and through many elections because Vermonters are famous for splitting their tickets and voting for the candidates they want,” Wright said. “They don’t care about the national politics. Vermonters are great at separating out what Vermonters do … as opposed to what’s going on in Washington.”

His fellow lawmakers cheered, and Scott declared the news conference over.

Thanks for reporting an error with the story, "Douglas trumps ‘the Donald’ for GOP candidate Phil Scott"