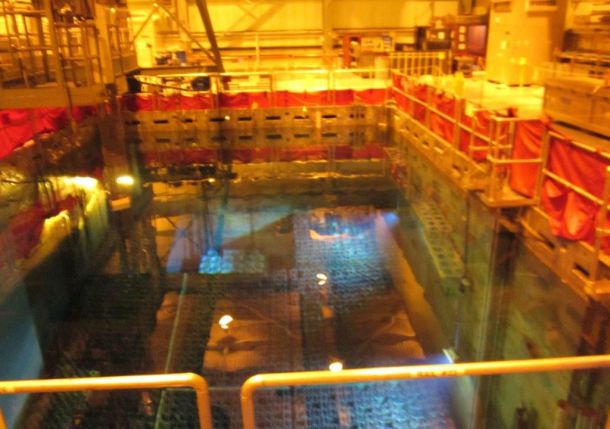 Budget documents released Thursday show the governor has zeroed out Vermont's Radiological Emergency Response Program budget — a $1.6 million line item in the current fiscal year. That would mean, as of July 1, the likely loss of several state jobs and the closure of a Brattleboro office dedicated to the program.

As things now stand, the cuts will be necessary because Vermont Yankee owner Entergy Corp. no longer will be required to fund Vermont's radiological response planning. But state officials said Friday they're still talking with Entergy administrators about whether the company might voluntarily make a contribution for fiscal 2017 and, possibly, beyond.

“I can't talk about those discussions, but I can tell you that they're ongoing and productive,” state Public Service Commissioner Chris Recchia said.

Entergy Vermont Yankee spokesman Marty Cohn confirmed the company has not ruled out providing some level of ongoing emergency planning funding for Vermont. But it's not clear whether that money would allow the state to forgo some of the cuts now planned.

Entergy stopped producing power at Vermont Yankee at the end of 2014, and the company has sought a series of regulatory changes as the Vernon plant heads into a period of extended dormancy it calls SAFSTOR. The biggest change — approved by the federal Nuclear Regulatory Commission last month — is a drastic downsizing of emergency programming.

Vermont officials had opposed that change, pointing out that spent nuclear fuel will remain in a pool at the plant for the next several years until Entergy transfers the material into more stable dry cask storage. But the NRC ruled that, given the plant's reactor has been defueled, a decreased risk of accidents justified Entergy's request for fewer emergency planning requirements.

The NRC's decision means that, as of April 15, Vermont Yankee's 10-mile emergency planning zone – which includes all or part of 18 towns in three states – will shrink to the boundaries of the plant itself.

That will spur a series of changes. Entergy has said it will lay off half of the remaining Vermont Yankee workforce in early May, and the company will vacate its offices on Old Ferry Road in Brattleboro.

Also, there will no longer be a federal mandate for Entergy to fund radiological planning and related activities for the emergency zone towns or the three states. In Vermont, that money had been funneled through the state Emergency Management and Homeland Security Division of the Public Safety Department.

The Shumlin administration's budget documents for fiscal 2017 note that the state's Radiological Emergency Response Program “is in a state of flux due to the closing of Vermont Yankee and the anticipated changes to the on-site emergency preparedness program.”

The governor's budget eliminates all $1.64 million that was allocated to the program this year, including $181,317 in salaries and wages; $89,921 in fringe benefits; $71,000 in contracted and third-party services; and a variety of other operational expenses.

Grant money that's been distributed to towns in the emergency planning zone each year is wrapped into the program's budget and also has been eliminated for fiscal 2017, said Chris Herrick, state director of Emergency Management and Homeland Security. “There will no longer be any funds for us to give to local towns,” Herrick said.

The state's Radiological Emergency Response Program website says the program employs seven full-time staff and two part-timers; four of those positions are allocated to the Brattleboro office. Herrick said he's not yet sure how many of those staff positions would be eliminated in fiscal 2017 and how many of the workers might be reassigned to other duties. “We're still doing our analysis on that,” he said.

But some decisions have been made: Herrick said there would no longer be any state staff dedicated solely to radiological emergency response in relation to the Vermont Yankee emergency zone, and the Brattleboro emergency response program office would close at the end of this fiscal year.

An ongoing state emergency planning presence in southern Vermont is expected, Herrick said. Staff at that office — which may or may not be in Brattleboro — would be dedicated to “general emergency preparedness” in the area, Herrick said.

All of this is contingent on the complete disappearance of Entergy's emergency funding. But Shumlin's proposed budget documents make reference to the need to “maintain an adequate emergency preparedness program while the plant is in SAFSTOR status.”

That might be dependent on some ongoing support from Entergy. There is recent precedent for such an arrangement: Last fall, officials announced that Entergy had committed to paying New Hampshire a total of $279,000 over four years for continued support of emergency operations there.

Cohn cited that deal when asked about the company's talks with Vermont. “Entergy has shown its commitment to work with our neighboring states in terms of the deal with New Hampshire,” Cohn said Friday. “We're discussing a deal with Massachusetts, and we would welcome an agreement with Vermont.”

Though Recchia's Public Service Department doesn't operate Vermont's Radiological Emergency Response Program, he is at the forefront of the state's interactions with Entergy and is deeply involved in Vermont Yankee decommissioning. At a Brattleboro meeting last year, Recchia acknowledged there had been discussions about continuing Entergy's emergency funding in Vermont beyond the current fiscal year, but he characterized those talks as “unproductive and going in the wrong direction.”

Things appear to have changed for the better in the intervening months. On Friday, when asked about the potential for a funding deal, Recchia said he was “cautiously optimistic.”

Thanks for reporting an error with the story, "Shumlin budget cuts radiological emergency program"