[V]ERNON – Communities that host nuclear plants should have a significant role in developing rules that govern how those plants are shut down and cleaned up, local advocates say.

That’s the gist of a new opinion approved by the Vermont Nuclear Decommissioning Citizens Advisory Panel – the panel’s first such official opinion since forming more than a year ago.

On a 15-2 vote at a Nov. 12 meeting at Vernon Elementary School, the panel approved a short position paper advocating new ways to “effectively and substantively” engage host communities in decommissioning. In the wake of Vermont Yankee’s shutdown, some believe that kind of engagement has been sorely lacking.

Keeping track of the complex, federally regulated decommissioning process as it is currently constituted is “difficult for state agencies and (is) effectively beyond the capacity of local or regional government entities,” the opinion says.

The citizens advisory panel, established by the Vermont Legislature, has been meeting since September 2014 – three months before power production ceased at Vermont Yankee. The panel is supposed to “advise the governor, the general assembly and the agencies of the state and the public” on Vermont Yankee issues; the group also is required to send an annual report to the state and to provide a forum for public comment.

But members have struggled with what it means to advise, especially given the body’s size and diverse makeup. There are 19 members, including representatives of state and local governments; citizen appointees; a union representative; and administrators from plant owner Entergy.

A few months ago, the panel agreed on a method for coming up with advisory opinions – a majority/minority setup modeled loosely on the U.S. Supreme Court – and set forth several topics to tackle. Those topics were public engagement on the nuclear decommissioning process; continued groundwater monitoring at Vermont Yankee; the permitting process for a second spent-fuel pad at the plant; and continued funding for regional emergency-response planning.

At the time, state Public Service Department Commissioner Chris Recchia warned that “we’re going to have to have major discussions on each of these.” So it came as no surprise that, at the panel’s Nov. 12 meeting, only one advisory topic – public engagement in decommissioning – actually came to a vote. 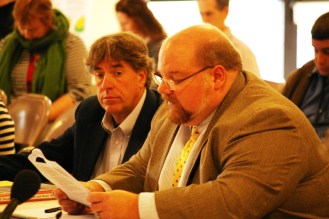 Before the meeting, Windham Regional Commission Executive Director Chris Campany had written a draft opinion on engaging host communities in decommissioning rulemaking. After recommending some minor tweaks, a majority of the panel accepted it.

The opinion notes that decommissioning is guided by federal policy, and the federal Nuclear Regulatory Commission reviews a plant operator’s Post Shutdown Decommissioning Activities Report. However, “because of the current absence of decommissioning rules, as a plant decommissions it applies to the NRC for amendments to its current license and exemptions from NRC operating-reactor regulations,” the document says.

That’s what has been frustrating and confusing for many state, regional and local officials as decommissioning planning begins at Vermont Yankee. It’s a common complaint that the interplay between Entergy and the NRC, along with the lack of clear federal decommissioning rules, has left smaller governmental entities and the public out in the cold.

The NRC has begun crafting new decommissioning rules, and VNDCAP members say they “would like host communities to be actively and substantively engaged in this process from the outset.”

Noting that the Nuclear Energy Institute, an industry-support group, has formed a special task force to advise the NRC, the advisory panel believes “it is in the best interest of the public and the industry to have host communities similarly engaged.”

That could happen, the panel suggests, through NRC support of an organization – possibly the National Association of Development Organizations – that will “convene host communities to inform federal policy.”

• Document communities’ experiences during past nuclear-plant closures “including economic, fiscal, employment and environmental impacts.” All of those factors, the opinion says, should be assessed by the NRC as the agency develops environmental-impact statements for decommissioning.

• Assess the “host-community costs, benefits and risks” from delayed decommissioning versus prompt decommissioning. The fact that Entergy is taking Vermont Yankee into a decades-long period of dormancy called SAFSTOR has rankled some who want to see the site cleaned up and redeveloped much sooner.

The advisory opinion also defines “host communities” all communities within an operating plant’s 10-mile emergency-planning zone – not just a town where a plant is sited.

Becker, who participated in the Vernon meeting via phone, could not be reached for comment on her vote. Skibniowsky said he is concerned about the opinion’s definition of “host communities,” worrying that his town’s voice could be diminished or even lost within a larger group of towns.

“This advisory opinion is fostering the approach of some large organization coming in and coming up with one opinion based on what the consensus is from all the communities in the area,” Skibniowsky said. “The town that is most impacted (by Vermont Yankee’s closure) is not Guilford, it’s not Brattleboro, it’s not Halifax – it’s Vernon.”

Those dissenting votes will be noted on the advisory opinion, which VNDCAP Chairwoman Kate O’Connor said will have wide distribution. Those receiving the panel’s decision will include the NRC; Vermont lawmakers serving on Natural Resources and Energy committees in the state House and Senate; Gov. Peter Shumlin; the congressional delegations for Vermont, New Hampshire and Massachusetts; and other citizen advisory panels.

“We pretty much decided to send them to everyone and anyone,” O’Connor said.

The panel will convene again in December to consider issuing further advisory opinions.

There were some who wanted to formulate an official position on the location of Yankee’s spent-fuel pad at the Nov. 12 meeting, but there was general agreement that the issue would be too contentious to be handled that evening.

“I think it’s of great importance,” Skibniowsky said of the fuel-pad issue. “I also think it’s going to take some time.”

Thanks for reporting an error with the story, "Nuclear panel pushes for more local input"

Kelly Adams: I am begging Gov. Scott to do more to mitigate the spread of Covid