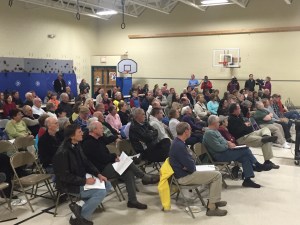 [S]OUTH BURLINGTON -- Close to 150 residents packed the gymnasium at the Chamberlin Elementary School on Monday night to take a first look at new noise exposure maps drafted by the Burlington International Airport.

The noise maps were last updated in 2006, and the draft maps released Monday are the first to account for the afterburners on the Air National Guard’s F-16 fighter jet engines.

A public comment period is open until Dec. 10, when the new maps will be submitted the Federal Aviation Administration, which requires updated maps in order for airports to receive noise mitigation money. The maps can be viewed here.

The federal money is distributed through a voluntary grant program and will be used to help residents pay for soundproofing their homes. There are an estimated 2,200 people in more than 900 dwellings who will be eligible for mitigation money, though no specifics on how much money would be available or how it would be applied was provided at the meeting.

In the past, the airport has sought to purchase homes affected by airport noise, but it has stopped that practice because local officials and residents say the housing is important to the community, said Gene Richards, director of aviation for Burlington International Airport.

Consultants and airport officials presenting the new maps were ill equipped to placate residents who fumed at the noise of F-16 fighter jets based at the airport, and voiced concerns about the scheduled arrival of even louder next generation F-35 fighter jets. No representative from the Vermont Air National Guard or U.S. Air Force attended the meeting.

Richards, who was interrupted on several occasions by residents demanding more information about the jet program, said he would pass along people’s questions and concerns, but was not in a position to address them. He assured residents that new mapping will be done if and when the F-35 is stationed at the airport, which is expected to happen in 2020.

A lawsuit filed in U.S. District Court is challenging the Pentagon’s environmental review of its 2013 decision to eventually base the F-35 at the Burlington airport. The City of Winooski has joined that suit after residents, many of whom live in the jets' proposed flight path, voted in favor of doing so in March.

Another suit challenged whether the City of Burlington, which owns the airport, should have followed the Act 250 permitting process requiring a noise assessment. After being rejected by lower courts, it was appealed to the U.S. Supreme Court.  The U.S. Supreme Court has declined to hear that case, according to an attorney who was representing Burlington in the matter.

As a result of including the F-16 afterburners, the area impacted by noise is wider parallel to the airport and its runway in the new maps. For reasons that are less clear, the ends perpendicular to the airport, extending into Winooski and Williston, were drawn inward in the latest mapping.

Essentially, that happened because the new map reflects a FAA recommended “joint use” sound modeling methodology that combines the noise impact of the Air Force fighter jets and commercial airlines.

The Air Force sound model covers only the 228 days out of the year that the jets fly, while the airport's model covers 365 days. As a result, the combined model had to spread the impact of jet activity over a full year, affecting the contours of the zone recognized to be impacted by airport noise.

However, members of the community said noise from the jets has a greater impact on their lives, and some expressed concern that the new model waters that down.

It’s also frustrating that these determinations, which can already feel arbitrary -- for instance next-door neighbors can straddle the noise exposure line -- are measured using computer modeling and not actual sound recordings, they said, but officials said such measurements aren’t practical.

Some residents asked if the federal noise mitigation money could be put toward blast deflectors and engine run-up enclosures along the runway. Richards said that’s a possibility, but he said federal money is likely better used to soundproof homes.

At Monday’s meeting, residents also vented frustration with uncertainty about the airport’s plans to develop land it has already purchased. Local officials said that land is still zoned for residential use, but many people at the meeting scoffed at the idea that would prevent commercial development in the future.

“What are you going to do with all that land? What’s going to happen to our homes?” Lou-Rhea Dattilio demanded of Richards. She lives on Elizabeth Street, directly next to the airport.

Richards responded that this was not the venue to address those questions and there would be opportunities for public discussion of the airport’s development plans early next year.

Clarification: This story was updated at 8:17 p.m. to reflect that the U.S. Supreme Court will not hear a lawsuit filed against the City of Burlington.

Thanks for reporting an error with the story, "Residents express frustration with new airport noise maps"