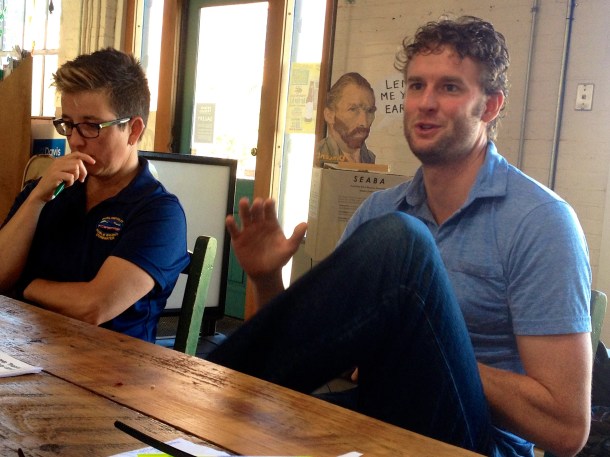 Nate Wildfire, the assistant director of the Community & Economic Development Office (CEDO), talks about brownfields on July 28, 2015, at SEABA. Stormwater planner Megan Moir is to his right. Photo by Jess Wisloski/VTDigger.

[B]URLINGTON – A small group of artists and residents met with city leaders last week to learn more about the challenges of developing contaminated sites along the Pine Street corridor.

While some residents who came out to meet with city planners last week are ambivalent about plans for new buildings and housing in the South End, what they learned was that some of the mammoth changes envisioned in PlanBTV South End would first require many delicate maneuvers.

Three adjacent brownfields that face redevelopment are, for instance, essentially protecting the 38-acre Barge Canal, named for the sunken barges underneath.

The liability for disturbing the site, which finished a remediation plan in 1983, rests on 23 companies and individuals. 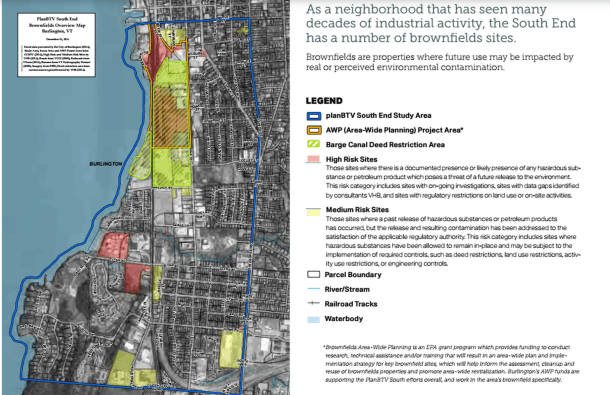 The Barge Canal, in green stripes, is at the center of a new development area on the southern end of Burlington. Image courtesy of Goody Clancy.

Those facing high-stakes litigation in a disruption include Green Mountain Power, New England Electric System, Vermont Gas, General Electric, Lockheed Martin Corp., Maytag Corp., the state Agency of Transportation and the city of Burlington, which means, they are legally responsible if the site’s soil cover is disturbed.

Impermeable soil covers, or caps, are how sites like the Barge Canal contain toxic chemicals, and are considered a “remedy” in regulatory terms.

At a meeting held by the South End Arts and Business Association (SEABA) last week, representatives from Burlington City Planning, Community & Economic Development, and Public Works agencies explained what protective measures would be involved in new brownfield development, as well as what risks might prevail.

“There’s several corporate interests that are liable for the pollutants that have been there now for years,” said Nate Wildfire, assistant director of Economic Development for Burlington.

“They have an interest if a development on the site or surrounding the site in any way changes the hydrology of what goes into the Barge Canal. Basically, their butts are on the line,” he told residents at last week’s meeting.

“That remedy’s (the soil cap) in place and anything that threatens that remedy or disturbs it is a huge risk for all of those players, as well as the regulatory agencies that are monitoring it or overseeing it,” said David White, the city’s planning commissioner.

The hazardous waste began with a coal gasification plant on Pine Street that ran from 1908 to 1966.

The residual oil and woodchips that were disposed of in the Pine Street Canal (at the grassy marsh area just beyond Howard Street off Pine) left in their wake groundwater ruined by polycyclic aromatic hydrocarbons (PAHs) and volatile organic compounds including benzene, toluene, and xylenes.

Wildfire, who said the city is currently involved in a year’s worth of soil testing for pollutants at a site it owns along Pine Street, said it was worth noting that all urban areas face hazardous soil contamination.

“By a lot of definitions, every teaspoonful of dirt in the entire city has a higher level of contaminants than is acceptable by some,” he said.

“So, we’re talking about what else can we do here, whether it’s developing on an adjacent brownfield or having footpaths or boardwalks in the Barge Canal, we always have to understand that we cannot disrupt the remedy in any way.”

There’s only two ways to deal with really contaminated brownfields, Wildfire said. “Cover it, and don’t let anybody dig it in for a really long time, or haul it away.”

Because hauling is so costly – imagine 1,000 dump truck trips just devoted to digging up contaminated soil and each traveling 50 to 100 miles to bury it in a landfill – the city’s looking at alternative ways of dealing with the earth while stimulating growth.

One idea is to find ways of covering the land so it is non-disruptable and still suitable to develop, using “piles” as a way to build or develop near the Superfund site. “Think of it like stilts,” said Wildfire, that relieve some of the weight on the soil and disturbing it less.

“We want to make sure that any new development that happens is done in a safe way, either through EPA or through some sort of process so that we know it’s safe for the residents, safe for the employees that work here and the commuters that are down here,” SEABA executive director Adam Brooks said.

It was one of several meetings that his organization has hosted related to PlanBTV South End. Other topics included affordability, housing and transportation connectivity.

“The South End’s not unique – it’s like this everywhere in the city,” said Wildfire. When asked if his agency dreaded the redevelopment work, he said no, "That’s our job."

“It’s an issue with every urban site,” said Megan Moir, the city’s stormwater management project director. “All of us are already coming into contact with these soils anyway. We’re just wondering if there’s a more cost-effective approach that’s a little more common sense, maybe we can do that.”

The Brownfields Economic Revitalization Alliance, a combination of three state agencies that was piloted in 2013, aims to bring “critical redevelopment projects” to underutilized brownfield zones, in a more economically viable way than they’ve been historically.

Teaming up the Commerce and Community Development, Natural Resources and Transportation agencies, the alliance increases coordination between federal and state agencies, and eases municipal processes to support development projects in targeted areas. Applicants could be private developers or municipalities, according to the Agency of Natural Resources website.

Two of the upcoming development sites in the South End are participating in the program: 453 Pine St., which is owned by Rick Davis, and the Railyard Enterprise Project, a development on city-owned land that aims to provide new alternative transit corridors in the South End, and more street frontage.

Deb Markowitz, in a commentary for VTDigger in 2013, noted that selected sites were deemed prime for an upgrade.

“Redeveloped brownfields almost always create jobs, first during the construction phase and then again as businesses, restaurants, health services and housing take the place of once abandoned and blighted space in the heart of the community,” she wrote.

Thanks for reporting an error with the story, "Worry over toxins at South End brownfields shared by corporate inter..."