[B]e encouraged, school officials told the House Ways and Means Committee on Tuesday, that only 20 school budgets were defeated at town meetings last week, instead of the 37 turned down last year.

Just don’t be too encouraged.

As the committee began considering the House Education Committee’s “big bill” on school spending, Jeffrey Francis and Stephen Dale, the executive directors (respectively) of the Vermont Superintendents Association and the Vermont School Boards Association, warned lawmakers not to assume that they no longer face public pressure to hold down school costs.

It was not a warning the lawmakers needed. 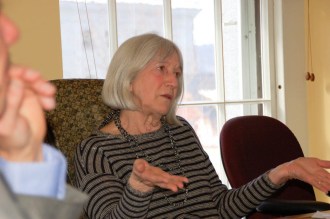 Rep. Janet Ancel, D-Calais, chair of the House Ways and Means Committee, said that despite last week’s more hopeful outcome, “You heard a few people say the pressure is off … 20 is so much better than 35, we’re home free. I think that’s not the case.”

Francis and Dale agreed. Responding to public anger at rising property taxes, Dale said, school boards held down their budget increases this year, with a statewide increase of less than three percent.

That kept the number of budget defeats at bay, they said. So, in all likelihood, did the fact that the Legislature seemed to be taking seriously the problem of rising school costs, and at least talking about doing something about it.

After all the tumult over school spending, Francis said, “I think it would be difficult to be in Vermont and not expect that there will be some changes.” He said he believes that assumption did diminish the pressure somewhat at the local level.

The House Education Committee’s big bill is calling on local school districts to engage in studies with neighboring districts with the aim of forming larger integrated education systems of 1,100 students.

The bill has carrots to encourage mergers and sticks for those who don’t, and sees phaseouts for supports such as small schools grants and the “hold harmless” provision which has cushioned schools from the financial blows of declining student populations.

Francis said he does not like to speculate on the reasons for budgets being voted down, and that they differ town to town.

A few towns voted to add more money to their budgets from the floor at town meeting, and two cut the school budgets, then passed them, said Francis.

Since 1997, Vermont’s public schools have seen a decrease of more than 21,000 pupils, but staffing levels have remained relatively constant.

Of last year’s alarming number of budget rejections, Francis referred to the 2014 town meeting votes on school budgets as “a marker,” one which led to the issue of rising education spending and property taxes becoming a major policy focus this year in Montpelier.

Francis and Dale then gave the House Ways and Means Committee a history of budget actions in Vermont going back to 2003.

In that year, 51 school budgets failed to pass–a much more alarming number than even last year’s total (including the 35 on Town Meeting Day and two voted down later). “There was growing concern about implications of Act 60 and this was the lead up to the passage of Act 68,” said Francis.

To that point, Francis said strong statements came from the administration to “really scrutinize your budget,” and local boards heeded that call for austerity.

Francis noted, “Many people have said this is the most important issue on the table for the General Assembly right now,” and he sees the wider margin of budgets passing as a signal that people smell change in the wind, even if not everyone is happy with what is on the table.

Dale said the modest increases in school budgets and per-pupil expenditures are the lowest they have been in years.

That, he said, is “fairly remarkable,” given that 80 percent of school costs are tied up in personnel, and contracted salaries are usually in the 3 percent to 4 percent range for increases, plus health care costs also go up every year, 4.5 percent last year, but 4 percent to 7 percent overall in the last decade on average.

Dale’s message on the austerity of the local school budgets came with a tale of caution, though. For many districts who do not operate their own high schools, deep cuts into elementary budgets are occurring across Vermont.

Last year, there was what Dale called “a perfect storm of upward pressures on the property tax,” and the more than three dozen school budget failures served as “a wake-up call to local boards to make sure budgets stayed low, and I think they did a very good job.”

The wake-up call was likewise heard at the Statehouse, Dale said.

“Last year, folks were saying we need to send a message and I think it’s clear the message was heard,” he said.

Thanks for reporting an error with the story, "Lawmakers urged to be realistic about school budget success"

Gary De Carolis: We are losing the opioid overdose battle

VTDigger needs 300 readers to make a member contribution by Friday, Dec. 10 in order to stay on track to meet our annual budget goal.