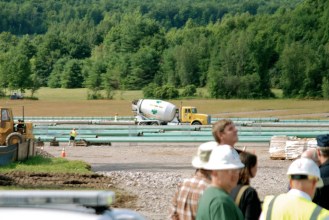 Sections of pipe are encased in cement at Vermont Gas’ staging area in Williston. Photo by John Herrick/VTDigger

Construction costs continue to drive up the price to build a natural gas pipeline through Addison County, according to documents filed with regulators Thursday.

Vermont Gas Systems filed an analysis to explain its latest cost estimate to build a pipeline from Colchester to Middlebury. The one-page chart shows construction costs have more than doubled since first budgeted in 2013.

The Public Service Board is still deciding whether to reconsider the $154 million project since a second cost increase was announced in December. The project was cleared for construction this summer. But since the project was permitted in 2013, building costs have been on the rise as the natural gas boom drives a burst of pipeline construction.

The latest estimates are not final. The company still has construction contracts that are out to bid, according to Beth Parent, a spokeswoman for Vermont Gas.

The company has spent about 20 percent of its construction budget on the first five miles of the 41-mile pipeline, the analysis shows. This amount does not include the upfront cost to purchase materials, such as piping.

Together, the company says the project will bring more than $250 million in economic benefits to Vermont.

The construction of the project will create as many as 444 direct and indirect jobs, according to a report by the Vermont consulting firm, Northern Economic Consulting, Inc.

The firm’s report found the project would increase payrolls by $45 million over the life of the two-year construction period. During this time, the project would pump $3.7 million into the tax base, the report states.

“The benefit analysis indicates that the project is still strongly in the public interest,” Vermont Gas President and CEO Don Rendall said in a statement Thursday.

The report does not say how many of those jobs are permanent or how many are construction jobs.

The Department of Public Service, which determined the project was still beneficial under the last cost estimate, now says it has “serious concerns” about the cost. The project may have changed so much that it no longer qualifies for a state permit, according to the department.

The department represents ratepayers in utility matters while the Public Service Board serves as the regulatory body.

“Accordingly, the Department strongly urges the Board to investigate whether the Phase I Project remains in the public good in light of the revised cost estimate,” said Louise Porter, special counsel for the department, in a filing to regulators Monday.

The department said the two significant cost increases in a short time frame are reason to give the project greater scrutiny.

“At some point, the costs of a project such as this could overwhelm the benefits. The Department cannot say at this time whether the second revised cost estimate approaches that tipping point-however, it is clear that the margin is shrinking,” Porter said.

The department said the benefits of the project should take into account the recent plummet in oil prices. Crude oil is now nearing $45 per barrel, the lowest since 2009, according to the Energy Information Association. It remains to be seen whether falling oil prices will last or whether the low prices are a temporary imbalance caused by oversupply.

But the Vermont Fuel Dealers Association, a trade group, says prices will remain low for at least a decade. The fuel dealers, who stand to lose marketshare to the pipeline, say Vermont Gas is overstating the benefits of the project. They say the drop in oil prices and the rising cost of natural gas is narrowing the project’s competitive edge.

“Claims that homeowners can cut their bills in half by converting from oil heat to utility gas are not credible, especially in today’s markets. Any purported economic benefit attributed to the project has vanished,” said Montpelier attorney Richard Saudek, who is representing the fuel dealers before the Public Service Board.

The company has used fuel price data for its economic analysis from Nov. 2012, when oil was $3.80 per gallon, according to the Department of Public Service. As of December, the price per gallon was $3.22.

Vermont Gas used fuel prices from December to estimate the anticipated savings in their latest analysis. The company has previously said the project would save homes and businesses $195 million over 20 years on their fuel bills. Now, that estimate is $174 million, according to Eileen Simollardes, vice president of regulatory affairs at Vermont Gas.

“Even with a decreased competitive position relative to fuel oil, the project still has solid economic benefits for customers and for the economy,” Simollardes said in a statement.

Vermont Gas considers this estimate conservative, citing a Moody’s Analytics prediction that oil prices will rebound in the next three years.

Vermont Gas is also pioneering a gas island concept and has begun shipping gas by truck to a pipeline network to feed industrial customers.

Thanks for reporting an error with the story, "Pipeline construction costs more than double since first budget"