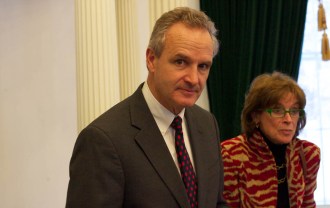 Addison Democrat Chris Bray was chosen Friday to serve as chairman of the Senate Natural Resources and Energy Committee.

The Senate Committee on Committees selected Bray from at least six others interested in filling the committee responsible for crafting the state’s environmental laws. After delay, the three-member committee filled all the Senate’s committees. Bray replaces Sen. Bob Hartwell, D-Bennington, who retired after last session.

The Natural Resources and Energy Committee will address the prominent issues of crafting a new renewable energy program and restoring water quality across the state. Gov. Peter Shumlin made the issues the focus of his inaugural address Thursday.

Bray agreed with the governor’s priorities on Lake Champlain, but he wants to better understand the administration’s renewable energy proposal. But Bray fundamentally agrees that more electricity should be generated from cleaner forms of energy to cut back on greenhouse gas emissions that cause climate change.

“Climate change is the largest challenge we face, not just as legislators but as a species,” he said. “There are some pretty discouraging predictions out there about what will happen, but we can’t afford the be paralyzed by that uncertainty.”

Bray said the state is in the midst of a renewable energy revolution that requires the state to revisit how it plans and pays for energy generation projects, like solar and wind farms. He said the state quasi-judicial regulatory body, the Public Service Board, was designed to review only one dozen such projects per year.

“But now we’re moving to distributed generation and we have hundreds of generating stations, like solar, widely distributed across the landscape and yet we’re still using a single, small point of planning and control,” he said. “I think its a model that we ought to test.”

Bray founded a marketing firm, Common Ground Communications, and was first elected as a representative in 2007. His “pro-environmental” policy position has earned him high ranks with an environmental advocacy group.

Sen. Diane Snelling, R-Chittenden, will remain vice chair. She said her priority this year is improving the state’s water quality. She said the state must first tell polluters how to comply with the law, and back it up with enforcement.

She is also interested in pursuing a policy to implement an aggressive water quality policy known as “anti-degradation,” which would prevent any further pollution to Vermont’s water bodies. The state is yet to implement the policy. 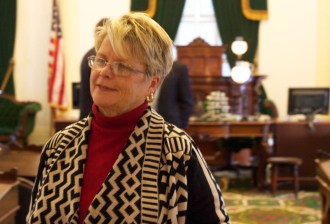 Lawmakers this session may consider overhauling the state’s complex education finance system, others want to simply cut costs. Rising property taxes have brought attention to how the state pays for public education.

Cummings said she is going to spend time in committee defining any problems with the state’s public education system. She said there is a public perception that property taxes are to blame, and she does not have a position on whether to adjust income sensitivity as an alternative.

One problem, she said, is that the state’s school system was built for the baby boom. She said she will seek to find a holistic approach to addressing the state’s aging population with economic development policy. Cummings was selected to serve also on Economic Development.

“Our population is declining — it’s aging, if not declining — and the base of the taxpayers is aging,” she said. “But part of this is under the purview of economic development.”

Cummings has been a member of the Vermont Senate since 1998.

As chair of the committee, she will replace former chair Dick McCormack, D-Windsor, who will now serve on Appropriations.

Sens. Dustin Degree, R-Franklin, and Brian Campion, D-Bennington, will join Cummings on her committee. Campion is also serving on Natural Resources and Energy.

Sen. Becca Balint, D-Windham, will serve on Institutions and Economic Development, and Sen. Brian Collamore, R-Rutland, will serve on Government Operations and Health and Welfare.

Judiciary was the only committee left unchanged.

Thanks for reporting an error with the story, "Senate committees take shape"