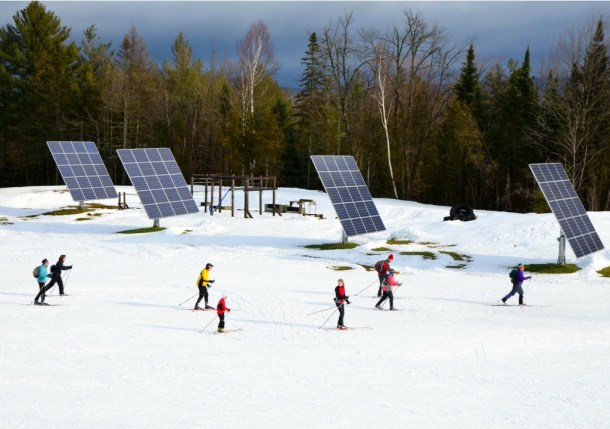 Owners Judy Geer and Dick Dreissigacker have made sustainability a key mission as the nonprofit they founded in 2008 transforms the well-known Craftsbury Outdoor Center in the Northeast Kingdom. Solar panels (there are eight in all) now provide up to 80 percent of the power used by the center. Photo by Andrew Nemethy

In This State is a syndicated weekly column about Vermont’s innovators, people, ideas and places.

[D]ick Dreissigacker and Judy Geer have devoted much of their life to an esoteric world of racing sculls and shells, strokes and oars. They never figured they’d end up being philanthropists, let alone overseeing one of Vermont’s most iconoclastic and best-known outdoor centers. But passion sometimes leads to strange and wonderful places, and that is where they are today.

The pair are elite rowers who competed in the Olympics and married in 1985 and settled down in Morrisville, where Dreissigacker and his brother Peter founded the highly successful business Concept 2 in 1976. The company makes high-tech carbon-fiber oars and blades whose revolutionary design now dominate the world of competitive rowing. Their ergonomic rowing machines created a new fitness and training category and spawned a new world of indoor rowing competition. 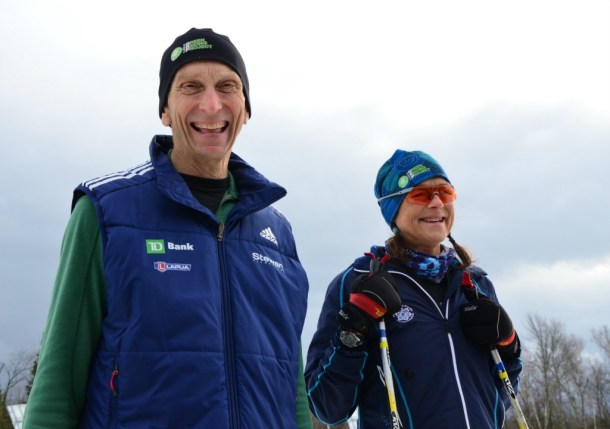 Dick Dreissigacker and his wife Judy Geer have created an unusual nonprofit model whose mission is sustainability, landscape preservation and providing a low-cost venue for lifetime family fun, health and sport. Photo by Andrew Nemethy

But the athletic couple – Geer was the sixth employee to join Concept 2 – found that once they had kids that the realm of water in its frozen form took on an increasing role in their lives. Their three children, Hannah, Emily and Ethan, took to nordic skiing and grew up training and racing in the programs on the extensive trails at the Craftsbury Outdoor Center.

Dreissigacker, who went to Brown, and Geer, a Dartmouth grad, also were guest coaches at sculling camps there on Lake Hosmer, and Craftsbury became an integral part of a family life often focused on athletics and the Vermont outdoors. As Geer says, expressing her fondness for Craftsbury, “it was incredibly wonderful, the things our kids had growing up.”

But around 2005, that all seemed in flux as the outdoor center’s founder, Russell Spring, looked for an exit strategy after three decades overseeing the extensive operations. “We wanted to see it continue,” says Geer. “Russell was getting older, so we began a conversation with the Springs about it, visiting the future together.”

As she puts it, “we came to pretty much a shared vision,” and in 2008, Dreissigacker and Geer bought the Craftsbury Outdoor Center, lock, stock and unique Vermont vibe: Trails and snow-groomers, docks and cabins, touring center and ramshackle old farmhouse office, rustic weatherbeaten dorms (which once hosted boarding students in a previous life as Cutler Academy), dining hall, and lakeside frontage on Lake Hosmer and around 130 acres, all surrounded by the renowned vistas of the town of Craftsbury’s rolling farmlands and forests. 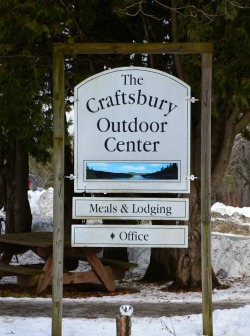 The Craftsbury Outdooor Center, founded in 1976 by Russell Spring, has become a sports mecca for its scenery, trails, athletic training opportunities and rustic Vermont vibe. Photo by Andrew Nemethy

Despite being two twisting dirt-road miles off the asphalt in far northeastern Vermont, in its nearly four decades Craftsbury developed passionate fans who cherish its unvarnished edges and reputation as a place run by athletes for outdoor enthusiasts of all ages and stripes. Ski director John Broadhead, Pepa Miloucheva, the competitive ski director, and runner and trail grooming wizard Keith Woodard are just a few of the well-known names in nordic ski circles associated with Craftsbury.

“We have a wonderful crew,” says Geer, “people who think it’s fun to wake up in the middle of the night and make snow.”

When Dreissigacker and Geer bought the outdoor center it wasn’t really as a new business venture, though some 50-60 people work full- and part-time there. “We had the concept of a nonprofit, and we were in a place where we could make that happen,” says Geer. “We did it because Craftsbury has been this wonderful place for our family,” she adds.

It has been a handful, admits Dreissigacker, who laughs as he says, “What did I get myself into?” But six years into their tenure, their philanthropic ideas continue to percolate not only at the center but through the community.

With its helter skelter layout, rough-hewn sheds, old farm equipment and grooming gear scattered around, Craftsbury will never be mistaken for a glitzy resort – and that is its quintessential Vermont charm. Hearty home-cooked food, simple accommodations and unpretentious atmosphere are married to a fanatical focus on trail grooming and providing high-level instruction and training in a classic rural setting, whether it’s running, sculling, biathlon or skiing. 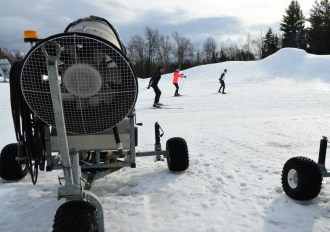 Snowmaking machines at the Craftsbury Nordic Center are used to create a stockpiled mountain of snow that is spread on trails when Mother Nature doesn’t cooperate. Thanks to its northern location and passionate trail workers, Craftsbury has become a Mecca for high school, college, elite athletes and ski enthusiasts who can count on training when other areas are closed due to lack of snow. Photo by Andrew Nemethy

Thanks to its Northeast Kingdom snowbelt location, Craftsbury is blessed with reliable snow to cover some of the nicest trails in New England. When the natural stuff falls short, Craftsbury spreads snow the old-fashioned way, shoveling and trucking it onto the trails from a giant stockpile created by snow machines. Towering 20 feet or more high, the stockpiled mountain of snow has become a trademark challenge for young skiers to struggle up and survive on a steep run down – just the kind of fun that Dreissigacker and Geer wanted to see continue.

In a way, the couple are following an old tradition, a modern-day version of the 19th century Vermont industrialists and entrepreneurs who gave back to their communities gifts of elegant libraries or opera houses. But their gift is about access and opportunity and preservation as much as bricks and mortar, though there’s that too, symbolized by a new touring center costing around $1 million that opened around Thanksgiving. It is just part of the transformation they are undertaking in the region. 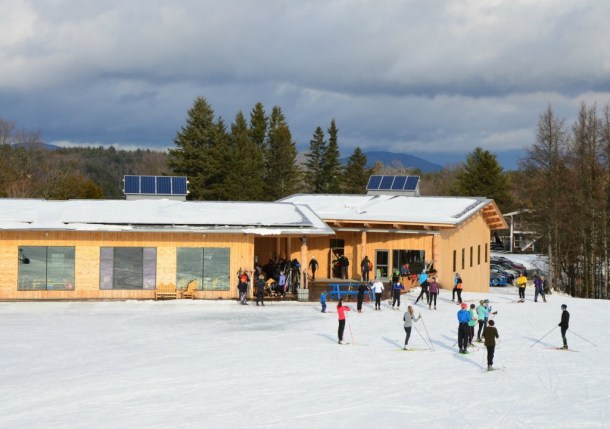 A new touring center and fitness facility opened in Thanksgiving symbolizes ongoing changes at the Craftsbury Outdoor Center under owners Dick Dreissigacker and Judy Geer, who bought it in 2008. The Morrisville couple created a nonprofit model to run the center with a mission to promote affordable health and lifelong fitness, sustainability and land preservation. Photo by Andrew Nemethy

Using a foundation they created as the financial vehicle, Dreissigacker and Geer have bought important properties to ensure continuation of the extensive center trail system, including the former Windridge tennis camp, turning it into a summer camp more focused on rural and ecological values. A number of new family cabins are planned to replace one of the old dorm buildings. And when nearby Highland Lodge, an iconic inn in the Kingdom, closed along with its trail system, Craftsbury took over grooming and added those scenic trails to a system that now tallies around 115 kilometers.

Eight solar trackers and many smaller panels which can provide up to 80 percent of the center’s power attest to the new green focus. Dreissigacker proudly notes the new touring center was built using local Vermont wood and it has composting toilets, and a wood-fired boiler now provides heat for much of the complex. 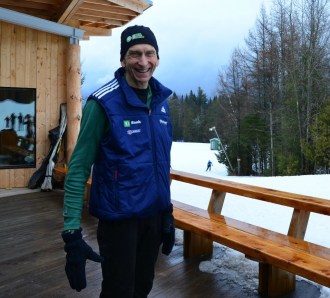 Dick Dreissigacker smiles on the deck of the new touring center and fitness facility that opened this year at the Craftsbury Outdoor Center in the Northeast Kingdom. Photo by Andrew Nemethy

The couple’s vision extends beyond the center itself. They are now collaborating with others to reopen the Craftsbury Inn in the village, a structure that will become the Craftsbury Public House and offer community gathering space, a pub, and another ski trailhead.

Dreissigacker, tall and lean and now 67, says their ideas for Craftsbury were inspired by the European model for cross country, where “skiing is like a public park” that everyone can use. Geer adds that they also wanted to ensure a place where “New England athletes could stay at home and train.”

Going the nonprofit route is a novel and uncommercial approach that has set Craftsbury apart from other notable touring centers. While a yearly adult membership at Craftsbury is a mere $50 and an adult day ski pass is $10 ($5 for students and seniors), at the Trapp Family Lodge a single day pass is $25 and a season pass $250. Most other big nordic centers, such as Jackson and Bretton Woods in New Hampshire, are now $19-$21 for a day trail fee.

For Geer and Dreissigacker, it has never been about the money or the cost – though Dreissigacker says the center is self-sustaining.

“To be able to sort of combine all this with our passions, the rowing and the skiing and the renewable energy, to put all that together and to benefit people – it’s a good feeling,” says Geer. Thanks for reporting an error with the story, "In This State: At the Craftsbury Outdoor Center, two former Olympians..."