Record-high estate taxes rescued what otherwise might have been a grim April for Vermont’s revenue forecast.

The General Fund’s personal and corporate income taxes came in $24.4 million short of projections last month. April typically is a high-earning month for the state, as most income tax receipts are collected by mid-month with the annual filing deadline.

Legislative economist Tom Kavet said Wednesday the shortfall is not a sign of weakness in the economy. Rather, it’s more of a ripple effect from a 2013 change in federal tax policy that the revenue models hadn’t caught up with.

Many “sophisticated taxpayers” accelerated their capital gains at the end of 2012 to avoid a higher tax rate in 2013. This drove up personal income tax collections in April 2013, and those high numbers were plugged into the forecast for 2014.

Kavet said he and his counterpart, state economist Jeff Carr, anticipated a relative decline in personal income tax collections compared to April 2013. But they didn’t account for quite enough, he said. 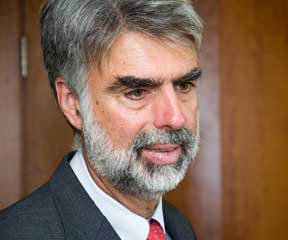 Vermont’s situation is not unique, according to Secretary of Administration Jeb Spaulding. Several states and economists are attributing lower than average tax collections to essentially the same scenario, he said.

“We do not believe April’s income tax results indicate a change in our steady, positive economic trajectory,” Spaulding said in his monthly revenue release, “as indicated by the most recent employment reports, permit applications and April tax receipts in other important categories such as Sales and Rooms & Meals, which were up 5% and 8% respectively over last year.”

Nonetheless, the situation may dampen some optimism that’s gone into budget writing for fiscal year 2015. Some important provisions rely on the generation of surplus revenue.

The House directed that one-third of any available surplus funds should be directed as follows:

The Senate plan would direct any surplus as follows:

Far from choosing how to spend a surplus, energy is now geared toward just reaching the fiscal year’s targets by the time it closes June 30.

“We believe we’ll still come close to target by the end of the year,” said Rep. Martha Heath, D-Westford. She chairs the House Appropriations Committee and sits on the conference committee hashing out differences between the House and Senate versions of the budget that takes effect July 1.

Their outlook would be much more grim if it weren’t for surprise income from inheritance and estate tax collections.

A record $19 million made up for most of the income tax shortfall. The figure surpasses the estate tax’s previous high, in 2006, by almost $3.3 million. No information is publicly available about the circumstances leading to the windfall.

Meals and rooms overshot an $11.3 million target by almost 13 percent. Diesel revenue surpasses a lower target of $1.2 million by 28 percent.

Revenues for May and June will be crucial. The General Fund has a 0.01 percent buffer in the fund’s fiscal-year-to-date target of $1.13 billion. Both the Transportation and Education funds are running short — about $1.6 million and $2.2 million, respectively.

Thanks for reporting an error with the story, "April revenues bailed out by record estate tax collections"