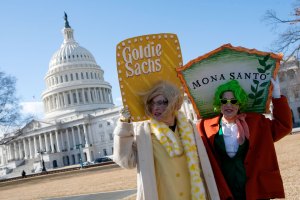 On Friday Vermont became the first state to call for a convention to amend the U.S. Constitution to reverse the U.S. Supreme Court’s Citizens United decision, which precipitated a flood of cash into politics.

Mike Monetta, 37, drove from Boston with a colleague and spent more than 10 hours Thursday in the House gallery waiting for the lower chamber to vote on the Senate-passed resolution, which -- as lawmakers race to wrap things up before the end of the biennium -- was taken up at the end of a marathon floor session.

“We exist for only one purpose and that’s to get a 28th amendment to get all money out of politics,” he explained.

“(Uygur) has this thing where in almost every story he keeps coming back to ‘whoever has more money wins,’” Monetta said. “But he didn’t want to just be negative, he wanted there to be a way to fix it.”

Legal challenges are an unlikely solution, as the Supreme Court has set precedent in a number of cases that equates money with free speech, Monetta said.

There are only two ways to amend the U.S. Constitution, either through an act of Congress ratified by the states or by a convention of states acting on their own.

Wolf PAC concluded that the federal government is too awash in campaign cash from outside groups to take action, so the organization is launching campaigns to push state legislatures to call for an end to corporate personhood and public financing of all elections, according to the organization's website.

There are 10 states currently considering similar resolutions to the one passed by Vermont, according to Monetta. It would take 34 states to trigger a convention to propose amendments to the Constitution, and 38 to approve an amendment.

States could appoint delegates that are local or statewide officeholders, or a state could choose to elect its delegates. Forty-nine states have passed resolutions calling for a convention to propose some 700 different amendments.

Earlier in the session it appeared there was no appetite in Montpelier for such a resolution, but a call to Sen. Dick Sears, D-Bennington, from one of his constituents got the ball rolling, he said.

“Dr. Steven Berry is a minister in Manchester,” Sears said. “He contacted me, and I’ve known him for several years, and we talked about it, and the more I heard, it made sense to me.”

Sears said he decided to put the resolution back on the “fast track” by holding hearings on the topic and eventually bringing it to the Senate floor for a vote where it passed 25-2.

“I think it’s an important resolution,” Sears said. “Congress isn’t going to act, and we’ve got to do something to get this country back under control.”

When the resolution crossed over to the House side and a hearing was held in the Government Operations Committee, S. Burlington farmer Benjamin Brown made an emotional plea to lawmakers to be the first state to call for a convention.

“Vermont has an opportunity to lead right now … it’s not left and right, it’s an issue of democracy,” he said. “Please allow the conversations to happen.”

Days later, the House followed the Senate and passed JRS 27, becoming the first state to call for a convention to amend the Constitution by reversing the Citizens United decision.

Several lawmakers raised concerns that the scope of a convention could not be limited and participating states could bring forward amendments for discussion that many would find unpalatable, such as outlawing abortion.

But those concerns did not dampen the House’s enthusiasm and the resolution passed 95-43.

“I see this resolution as an opportunity to kick-start a movement that I hope will spread throughout the country and let people become aware of the real problems we have with the influence of money on elections and on our public policy,” said Rep. Mike Yantachka, D-Charlotte.

Correction: The spelling of Dr. Steven Berry's last name was corrected May 6 at 12:03 p.m.

Thanks for reporting an error with the story, "Vermont first state to call for constitutional convention to get mone..."

Elayne Clift: How much more gun violence can we take?

Vermont GOP declines to back US House nominee Liam Madden