A proposal to increase Vermont’s minimum wage to $10.10 per hour on Jan. 1 passed the House on a voice vote Wednesday and will now move to the Senate. “A Vermonter working full time and making the minimum wage cannot afford health care, housing or food without government subsidies,” Smith said. “The Vermont House of Representatives’ vote today moves the state closer to a livable wage and means that Vermonters will be more likely to be able to meet their most basic needs.”

It’s estimated the $1.37 an hour raise would add about $30 million to paychecks for roughly 20,000 Vermonters currently working for less than $10.00 per hour.

“This bill is an effective step in helping Vermont’s low-income workers support their families and will enable people to put that money back into the state economy by spending at local businesses,” Head said.

As it stands, H.552 would quicken the pace of Gov. Peter Shumlin’s spring initiative to raise the state’s minimum wage to $10.10 over the course of three years. On the other end of the spectrum, some lawmakers have proposed raising it to $12.50 or more.

A state survey of basic needs in Vermont pegs the “livable” wage at roughly $12.48 per hour.

Vermont’s current minimum wage of $8.73 is the highest in New England, with Connecticut close behind at $8.70. Massachusetts and Rhode Island are both at $8, while Maine is $7.50. New Hampshire currently goes by the federal minimum wage of $7.25.

The increase passed with little fanfare in the House, but only after hours of prior debate about the impact a nearly 16 percent increase would have on the state’s economy — particularly low-income workers receiving public assistance and businesses competing across state lines.

The concern for low-income workers is whether the raise would be enough to make up for benefits they would lose as a result of earning more money. The increased labor costs concerns businesses, particularly if companies in neighboring states don’t have to pay the same rate.

Just before the House vote, Rep. Carolyn Branagan, R-Georgia, floated the idea of raising bank franchise taxes to fund an increase in the state Earned Income Tax Credit low-wage workers are eligible to receive. Branagan said the franchise tax had not been raised since 1997.

She withdrew her amendment as soon as she explained it, though. She said after the vote that she knew it wouldn’t have a chance, but she wanted to introduce a different approach to solving problems for low-wage workers. 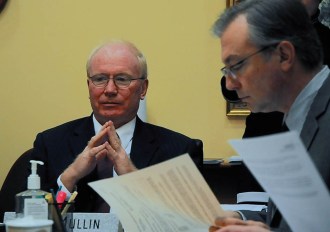 Sen. Kevin Mullin, R-Rutland, chair of the Senate Committee on Economic Development, Housing and General Affairs, said his committee would be asking many of the same questions that had been debated in the House.

“Some of the questions that I’ve flagged (are), what happens with the Earned Income Tax Credit, what happens with state benefits programs, things like that,” Mullin said. “We’re concerned that we don’t want to kick somebody off a cliff so that they’re actually going to end up in a worse position.”

Mullin’s committee started discussing H.552 this week, and will take testimony about the House-passed bill from business groups starting at 9 a.m. Thursday morning.

Thanks for reporting an error with the story, "Senate picks up minimum wage bill"