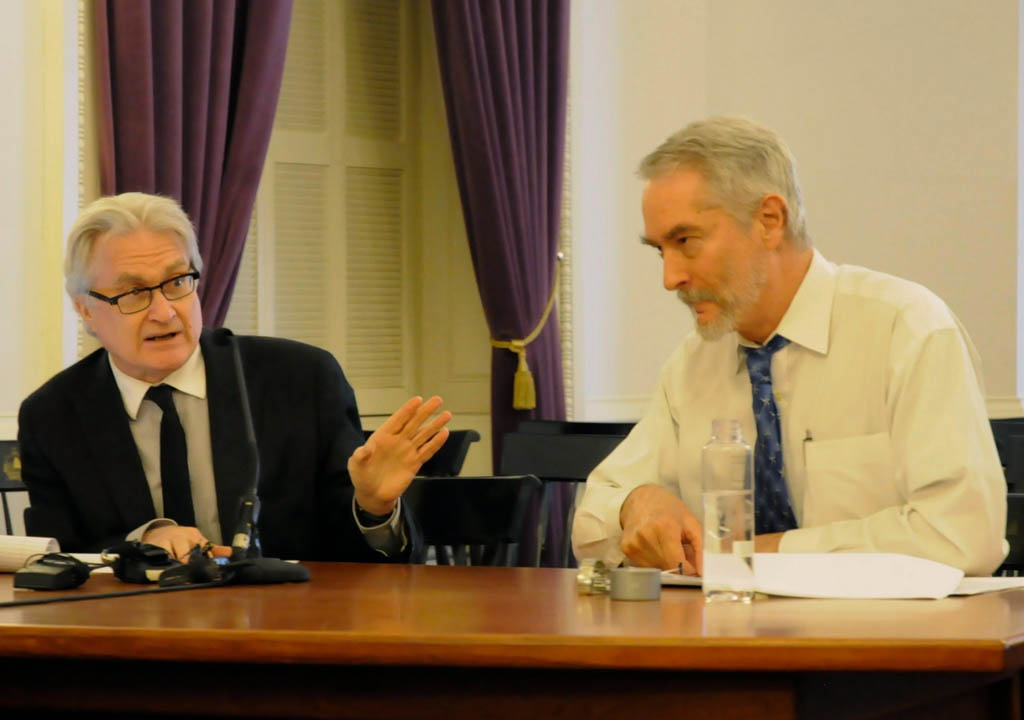 Dr. Michael Hansen (left), with the Consumers Union, disputes the testimony of Dr. Val Giddings, of the Information Technology and Innovation Foundation, at a hearing on GMO labeling. Photo by Hilary Niles/VTDigger

State lawmakers got a sneak preview Wednesday of the court battle that likely awaits if they pass a law requiring genetically modified foods sold in Vermont to be labeled.

Industry representatives both for and against a labeling law gave heated testimony at the Statehouse to members of the Senate Judiciary Committee, where a bill that already passed the House now awaits action.

H.112 would mandate that most packaged foods be labeled if they contain genetically modified organisms. As currently written, dairy products, alcohol and meat, plus restaurant food, would be exempted from the law.

Sen. Dick Sears, D-Bennington, chair of Senate Judiciary, said he supports the bill, but his biggest concerns are the potential cost of litigation and the dairy exemption.

Assistant Attorney General Bridget Asay testified that the state may spend about $1 million defending the law in court. Even if it is successful, she said it would be hard to recover legal fees. If the state lost, the legal challenge could cost $5 million or more. The estimate includes the state's costs and potential reimbursement for a victorious plaintiff.

Given the size of the potential price tag, Sears says, he wants to make sure the law is failsafe.

To that end, the hearing Wednesday served as a preview of what challenges opponents may lodge against the pending legislation. Sears said the expert testimony opposing a labeling law comprised the first negative comments his committee had heard, though the Senate Agriculture Committee previously gathered opposing views in their deliberations.

As senators finalize the bill for a committee vote by the end of March, two major amendments emerge as possibilities: One to require a legal defense fund to cover the costs of litigation, and another to eliminate the dairy exemption for fear it may undermine the bill's viability in court.

Asay conveyed Attorney General Bill Sorrell's concerns about a proposal to pass the bill only if a privately funded legal defense fund would be established to cover the expense of legal challenges.

“If the Legislature concludes that a proposed law serves the public interest and should be adopted notwithstanding the possibility of a legal challenge, it should pass the law and assume the cost of its defense,” Sorrell wrote in a letter to Sears. "Quite frankly that boxes us in," Sears told Asay at the hearing. He said he thinks it would be irresponsible to set the state up for a potentially costly lawsuit without setting aside the money to pay for it.

Sen. Jeanette White, D-Windham, said she’s troubled by the prospect of setting a precedent for only supporting what can be backed by wealthy interests.

The legal defense fund idea was not part of the Senate Agriculture bill, Sears acknowledged after the hearing, but he said that doesn't mean the idea can't be revisited.

Leaving dairy out of the bill was a strategic move on the part of VPIRG.

VPIRG's pro bono legal counsel, the Environmental and Natural Resources Law Clinic at the Vermont Law School, testified that case law also supports the exemption. Andrew Homan cited the failed regulation of the growth hormone rBST as a lesson that any object of labeling regulation must be provably different from the products that don't require labels.

Milk samples from animals that have and have not consumed GMO grains have not been proven compositionally distinct, he said. Therefore, they should be treated the same. Genetically modified ingredients in food products, however, can be detected.

"Do we have a reason, that can be defended in court, that exempts dairy and not corn chips," he asked. "Or is it because Vermont is a big dairy state?"

Beneath these legal questions brews a morass of conflicting opinions, contradictory scientific reports and varying interpretations about federal policy on GMOs — or lack thereof.

The differences are critical because many legal arguments — especially that of compelled speech — revolve around whether or not GMO products are different, and whether the information contained in a label is "fact."

Wednesday morning, labeling supporters said the federal Food and Drug Administration had not determined whether or not GMO foods are safe. But labeling opponents said the FDA had clearly determined that they are.

Stanley Abramson, an attorney with Arent Fox PLLC who represents the Biotechnology Industry Organization, as well as global agricultural firm Monsanto, is a former lawyer for the Environmental Protection Agency and a principal drafter of the federal government’s Coordinated Framework for Regulation of Biotechnology. Abramson testified by phone from Washington, D.C., to caution against the labeling law.

He said the FDA's position is that GMO food should be held to the same safety standards as anything raised through traditional breeding techniques. This implies the two groups of food are "substantially similar" and therefore should be treated equally under the law. Any labeling requirement to distinguish GMO food would be misleading, Abramson testified.

Abramson's position was echoed by Dr. Val Giddings, a geneticist by training who now works as a private consultant and who testified as senior fellow at the Information Technology and Innovation Foundation in Silver Springs, Md. Giddings and Dr. Michael Hansen, a senior staff scientist with the Consumers Union, differed emphatically on bodies of science surrounding GMO foods.

Giddings testified at length about a lack of credible scientific evidence that GMO foods pose any risks.

"If the state decides to move into that sphere of deciding what needs to be placed on the label, there is a risk it will be in violation of that federal standard," Abramson said.

The flip side of federal law and policy treating GMO and non-GMO food equally is that there is no mention of GMO products in the federal Food, Drug and Cosmetic Act. When it comes to the interplay between federal and state laws, federal statutes hold sway. No state law can preempt a law of the nation.

"The state requirement to label does not conflict with any federal law because there is none," said Hanses, of the Consumers Union.

The other member of VPIRG's counsel at the hearing, Laura Murphy, said similar labeling laws bolster the state's defense on the grounds of interstate commerce.

Should it pass, H.112 would not take effect for one or two years, to allow time for rule making by the state and compliance among food producers. Asay noted, however, that if any parties intend to sue over the law, they likely would file suit very quickly after passage, not waiting for the effective date to roll around.

Thanks for reporting an error with the story, "Senators preview legal challenges to GMO labeling law"