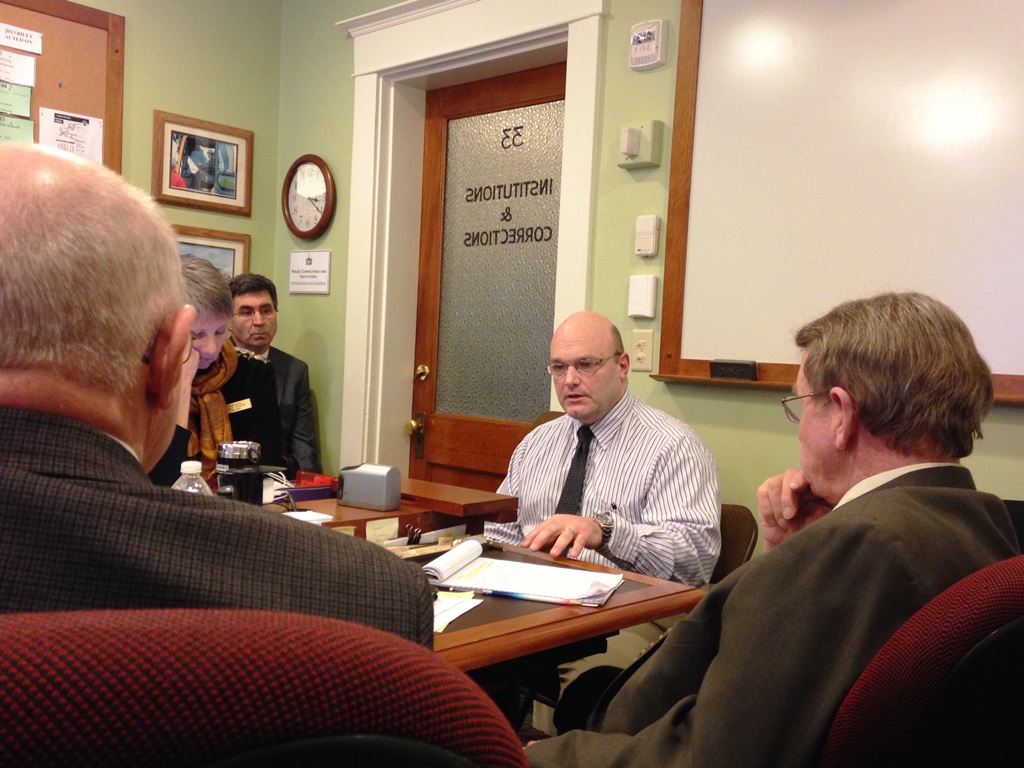 Richard Byrne, out-of-state unit supervisor for the Department of Corrections, testifies before the House Committee on Corrections and Institutions on Tuesday. Photo by Laura Krantz/VTDigger

More than 200 Vermont inmates in a Kentucky prison have been on lockdown since Jan. 15 after a series of assaults and fights broke out, a Department of Corrections official told lawmakers Tuesday afternoon.

The 205 Vermont prisoners are in the close-custody wing of Lee Adjustment Center, a Beattyville, Ky., prison that houses 460 Vermont prisoners, Richard Byrne, out-of-state unit supervisor for the Department of Corrections, told the House Committee on Corrections and Institutions.

“I’m concerned. Hopefully we can get to the bottom of this and find out who the culprits are and find out, if anything, how they’re operating,” Byrne said.

Only Vermonters are housed in the 816-bed prison after Kentucky did not renew its contract with CCA in July.

He said the lockdown is to keep inmates safe until they can locate the source of the recent violence.

Corrections Corp. of America, a private firm that runs the prison and contracts with Vermont, is handling the situation, Byrne said. He said inmates are cooperating.

“Nobody is locking them down for punishment, let me be clear. We really want to find out why this is happening,” Byrne said.

The state corrections department since the mid-1990s has contracted with Nashville-based CCA to relieve overcrowding in Vermont facilities. CCA runs prisons, jails, detention centers and other types of state and federal correctional facilities across the country.

In addition to the inmates in Beattyville, 39 Vermont inmates are at a facility in Florence, Ariz., Byrne told legislators Tuesday.

The state contract with CCA, which expires in 2015, allows it to send up to 660 inmates to Kentucky and 40 to Arizona, he said.

Without elaborating on the specific incidents that prompted the call for a lockdown, Byrne said it has been rocky at the Kentucky facility lately.

“This is a tough period of time down there because we are seeing some things that we have not seen in the past,” Byrne said.

During the committee meeting, chairwoman Rep. Alice Emmons, D/W-Springfield, asked if there is more drug or gang activity in the prison.

Byrne said there are gangs but couldn’t say for sure if they were formal or whether the recent violence is gang-related. He said there is always a reason behind assaults or fighting.

Staff in Kentucky typically need more direction than those in Arizona but Vermont DOC staff work with them and have for the past 10 years, Byrne said.

During his hour of testimony Tuesday afternoon, Byrne made it clear that prisoners in Kentucky are less supervised than inmates in Vermont prisons.

Byrne didn’t give a number for how many prison staff are assigned to the west dorm that is on lockdown, but said it is definitely more than two. There are also two roving staff members and a control room operator who monitors cameras, he said.

Plans are in place, he said, to “step down” off lockdown status. He said it is important to do so slowly.

“We’re really trying to be mindful and thoughtful of how we keep these people safe and, really, how do we get through this with balance?” he said.

Lockdown means that inmates are locked inside their housing units, Byrne said. Each inmate is interviewed and each cell is searched “top to bottom,” including inside mattresses, for contraband items, he said. Inmates eat and receive medical treatment inside the unit.

They are now being allowed out to shower and exchange linens, Byrne said.

Another unit, south dorm, is not locked down, Byrne said.

He said the state and CCA are working on a plan to address possible gang activities.

“When you really start seeing a rise in this you really want to be somewhat ahead of the curve, and if you’re behind it you want to get really quickly ahead of it,” he said.

“We’re working very hard to make sure the state of Vermont is satisfied,” he said.

The DOC’s contract with CCA ends in June 2015. The state is in the first year of a two-year extension to a two-year contract, Byrne said.

The state paid CCA $12.8 million to house 498 prisoners in fiscal year 2013, according to a FY13 budget document for the Department of Corrections.

That is lower than the cost to house prisoners in Vermont, in part because there are fewer staff and they are paid less, Byrne said.

In-state facilities have a “direct supervision” model with one officer per unit, he said. In Kentucky, staff moves between three pods.

Byrne said he talks with prison officials in Kentucky frequently, as he does with in-state prison supervisors.

Prisoners are transported by bus to Kentucky. Prisoners headed to Arizona stop in Kentucky along the way.

In fiscal year 2013, there were about 504 male inmates from Vermont incarcerated in private correctional facilities.

That is a decrease from a high of 589 in fiscal year 2012, according to an FY13 budget presentation from DOC.

In November 2004, 16 Vermont prisoners at the Lee Adjustment Center were among 23 prisoners indicted for a riot two months earlier, according to the Associated Press. The prisoners burned an administration building and damaged a housing unit.

The practice of sending prisoners out of state is controversial.

Rep. Suzi Wizowaty, D-Burlington, clerk of the House Judiciary Committee, sat in on Byrne’s testimony Tuesday. Wizowaty for several years has filed an unsuccessful bill to stop sending prisoners out of state.

The public typically only finds out about a lockdown if word gets out from an inmate, Wizowaty said. She said she receives letters at least once a week from prisoners. Some report having seen a fight in a yard with no guard in sight, she said.

“There is a very low level of supervision,” she said.

CCA is in talks to add 400 West Virginia inmates to the Kentucky prison, Byrne said.

Thanks for reporting an error with the story, "Vermont inmates on lockdown at Kentucky prison"