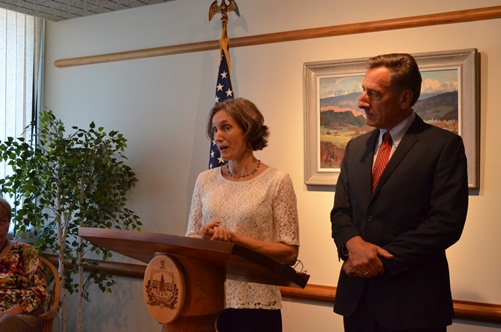 Gov. Peter Shumlin has picked Vermont and New Hampshire educator Rebecca Holcombe to head up the Agency of Education, starting in January.

At a news conference Thursday in Montpelier, Shumlin described why he chose Holcombe over the other two candidates for education secretary all three of whom were presented to him by the State Board of Education.

“When I asked her about her philosophy, No. 1 it matched mine, but No. 2, it always came back to the kids.”

Holcombe directs the Dartmouth Teacher Education Program in Hanover, N.H. Before that, she was a principal at Fairlee School in Vermont and a social studies and science teacher at the Frances C. Richmond School in Hanover.

Holcombe said she and the governor have similar views such as extending the school year, early child education and personalized learning plans for students — a new requirement the Legislature passed last session.

Holcombe is the state’s second secretary — the governor’s office took over management of the Agency of Education last year and selected then-commissioner Armando Vilaseca to serve an interim term as secretary until January 2014.

The State Board of Education ceded some control, but kept its policy-making role. Shumlin hailed the organizational shakeup as a success Thursday, and the board’s chair, Stephan Morse, echoed that assessment.

“There was some trepidation about that transformation, I’ve gotta tell you that from my perspective of governor, our partnership with the State Board of Education has been nothing short of stellar,” Shumlin said, adding that, “All of the terrible things that were said might happen have not.”

The fifth floor of the Pavilion Building in Montpelier was teeming with education leaders; Vilaseca, was not present, however. He had a conflicting meeting, according to Shumlin’s spokesperson Sue Allen.

The governor said he was impressed that Holcombe, as director of academics, had presided over the consolidation of four towns into the Rivendell Interstate School District, which serves Fairlee, West Fairlee and Vershire, Vt., and Orford, N.H.

“I say anyone who can bring together four communities to consolidate and create one school with people coming out happy is going to make a great secretary,” Shumlin said.

But don’t expect the next secretary to be a cheerleader for consolidation. Neither Shumlin nor Holcombe showed an appetite for proffering consolidation, citing local control. Both, in fact, questioned the premise that consolidation reduces costs.

“I generally do not buy into the logic that small schools necessarily cost more to run than big schools,” Shumlin said.

“I would second that, and the research literature supports that as well,” Holcombe added. “It’s not clear that consolidation does increase costs.” But, she said, she wants to look at “quality per cost” and “collaboration to reduce costs.”

The Legislature passed two laws several years ago to encourage consolidation, and cut down on costs, among school districts. During the media event, Morse announced that the board had, early this week, approved what he described as a voluntary but controversial merger for the Windham Central Supervisory District. If Windham voters approve the "regional education district," it will be only the second supervisory union to do so, and Morse said it was "a bit of a mystery" to him that other districts hadn't followed suit.

Holcombe, who did a case study on the state’s education financing system while at the Harvard Graduate School of Education, said she has faith in the current framework.

“I have to say I think Vermont has the most progressive and probably the most exciting education finance formula in the nation,” she said.

Clarification: Windham voters have not yet approved the "regional education district."

Thanks for reporting an error with the story, "Vermont-N.H. educator Rebecca Holcombe named Secretary of Education"