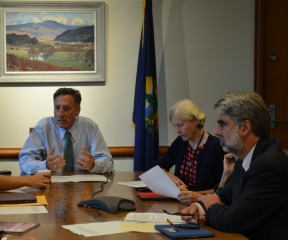 Gov. Peter Shumlin, left, addresses members of the Emergency Board on Wednesday, including Sen. Jane Kitchell, D-Caledonia, center, while Secretary of Administration Jeb Spaulding looks on. Photo by Alicia Freese/VTDigger

The Shumlin administration brought in three state departments, a state funding agency and lawmakers to seal the deal on a complex financing plan for a new state office building in St. Albans on Wednesday.

The plan takes $5.5 million out of the Corrections Department’s current budget and gives it to the Vermont Economic Development Authority (VEDA) so it can make a loan, at a 0.1 percent interest rate, to the private developer who was commissioned to build the new state offices.

The loan would be repaid to the state over 20 years, and Corrections would be repaid through the Budget Adjustment Act -- once money from the sale of the current state office building has come in.

The state is cutting the deal to help Mylan Technologies. The company, which specializes in the manufacture of adhesive drug patches, wants to expand its St. Albans facility, located across the street from the current state office building, and hire an additional 100 workers.

Though officials say the arrangement will create long-term economic growth in St. Albans, the deal seems counterproductive at first blush. The state is going to spend more to lease, rather than own, a building in the same city.

The Emergency Board approved the proposal Wednesday. The panel, comprised of Gov. Peter Shumlin and the chairs of the legislative committees on finance and appropriations, has the authority to make pressing spending decisions that arise between sessions.

Shumlin told the board at the outset of the meeting, “Many of my commissioners and secretaries have been actively involved in the design and implementation of some unusual transactions we are going to ask you to help us support today.”

The idea, hatched in the agencies of Administration and Commerce and Community Development, was largely the brainchild of Lawrence Miller, the Commerce Secretary.

Although four lawmakers sit on the Emergency Board, the full Legislature won’t have a chance to weigh in on this particular financing decision. Lawmakers did, however, authorize the move as part of Act 10, which passed last spring.

While the Emergency Board gave the go-ahead Wednesday evening, other lawmakers are perplexed by the plan, and they are miffed they didn’t have a say.

Administration officials said they had to act quickly so the private developer in charge of the project could meet a deadline for federal tax credits and begin construction as promptly as possible.

Why the state is switching buildings

The state is going to sell its office building at 20 Houghton St. in St. Albans, and relocate the roughly 200 employees from the Department of Labor and the Agency of Human Services to a different building — yet to be constructed — that the state will lease in the downtown section of the city. The state hired Re-Arch, a private developer, to build the new offices. After 10 years, the state can continue to lease the building or buy it.

Mylan Technologies is purchasing the old state office building from the state for $8 million. In a memo to lawmakers, Commerce Secretary Lawrence Miller describes the price as “substantially above market value.” This will allow Mylan to expand its transdermal patch facility, which, Miller says, will be a boon for St. Albans and the state.

“The biggest impetus for this plan is that Mylan has been growing really quickly in St. Albans. … They love this plant because of the workforce and we believe this will give them the opportunity to continue to grow where they want to, unfettered,” Miller said.

St. Albans stands to gain quite a lot from the arrangement. Secretary of Administration Jeb Spaulding described the arrangement as “a real shot in the arms” for the city.

The city approved a $13 million bond Tuesday evening to finance a 358-space parking garage downtown. State employees will occupy about half those spaces, and the state will pay for the leases helping to make the project — expected to spur downtown development — more viable for the city.

Economic and Policy Resources Inc., the applied economics firm headed by state economist Jeffrey Carr, conducted an economic impact report for St. Albans in February. The report showed the deal — which helps Mylan grow its operations in Vermont and spurs downtown development in St. Albans — will create about 190 new jobs over a 21-year period, inject more than $700 million into the state’s economy and add $61 million in disposable personal income in the state over the same period.

The state went scrambling for a creative solution because of a disquieting cost estimate for the new leased space that came mid-summer.

“We were approaching a leasehold square foot number that we found objectionable and that the governor found objectionable, and he said, basically, ‘Lower the number,’” Buildings and General Services Commissioner Mike Obuchowski said.

Earlier estimates had been inaccurate, Obuchowski said, because certain aspects of the project — the building’s design and final construction quotes, for instance — hadn’t been firmly pinned down at that point.

The new proposal will lower the annual lease from $1.3 million to $1.1 million. But that’s still more expensive than the current arrangement, and represents a roughly $500,000 hit to the General Fund. (State officials point out that the annual cost increase is closer to $200,000 if the money that will flow into the Capital Fund and the Education Fund as part of the deal is factored into the equation.)

Administration officials proffered the plan, and lawmakers were swayed when they heard the switcheroo will lead to long-term economic benefits that overshadow the uptick in direct costs.

Spaulding acknowledged the deal is complex, but he assured the Emergency Board, “In concept, it’s actually very simple.”

Normally, the state would have just deposited the money it got from selling the old office building into the Capital Fund, and then the Legislature would have chosen what to do with money.

The shuffling of funds, Spaulding explained, stems from “a cash flow kind of issue.”

The developer needed the loan in order to pull down $3 million worth of New Market Tax Credits by Nov. 15. The costs saved through those credits will, in turn, reduce the state’s lease rate by about $200,000.

The Corrections budget is sizeable so it has more of a cushion than some of the other departments, and it’s not unusual, according to Miller, for the state to dip into its budget, temporarily, when unforeseen spending needs arise.

The sale of the old building will send $5.5 million into the Capital Fund, which, pending legislative approval, will be redirected back to the Corrections budget.

Obuchowski, one of the plan’s central architects, described the plan as “a highly unique proposal.”

“I consider both the increased lease costs and the proposed use of the sale proceeds to be fundamental alterations in the proposal that received legislative approval,” Browing wrote in a memo to administration officials.

By earmarking the sale proceeds from the old office building, the administration is bypassing the legislative process, Browning says.

“Legislators and the public need to know that if their water and sewer project, or their state police barracks, or their courthouse renovations does not get funded, it is because $5.5 million went to the St. Albans project instead of coming back to the Capital Bill,” Browning wrote in a memo.

Other lawmakers have qualms, too.

Sen. Joe Benning, R-Caledonia, who sits on the Senate Institutions Committee, said, “Personally, I have some hesitancy. First the state is asking to remove $5 million from Corrections in the hopes that during budget adjustment, we will have that automatically coming back. It’s never a guarantee, and it leaves me concerned.”

Both Browning and Benning had concerns about the role of Re-Arch in the arrangement. “I’m not sure I like the idea of the state using public dollars to make loans to private entities. It’s new territory and new territory should always be approached with caution,” Benning said.

At Wednesday’s Emergency Board meeting, Shumlin held up the arrangement as a hallmark of the good that can come from public-private partnerships.

Thanks for reporting an error with the story, "Mylan Technologies gets boost from state in complex property swap"