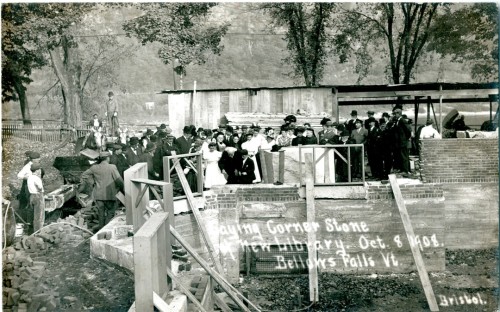 Residents of Rockingham turned out in Bellows Falls on Oct. 8, 1908, to watch the cornerstone being laid for the town's Carnegie library. Photograph courtesy of Vermont Historical Society.

Editor's note: This piece is by Nancy Price Graff, a Montpelier freelance writer and editor. In This State is a syndicated weekly column about Vermont’s innovators, people, ideas and places. Details are at www.maplecornermedia.com.

It’s a birthday the whole town can celebrate. The Rockingham Free Library turned 100 in 2009, but the extensive renovations and restorations undertaken to honor that milestone will finally wrap up late this summer. The interior will be thoroughly modern, as it was in 1909, and the exterior will still honor the history of the building.

“Libraries have changed, but the essence is the same,” says Celina Houlne, director of the Rockingham Free Public Library in Bellows Falls. “Libraries still are like a community’s living room.” 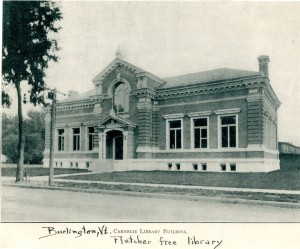 The Fletcher Free Library in Burlington was the grandest of the Carnegie libraries in Vermont. It has since doubled in size. Photograph courtesy of the Vermont Historical Society.

Last month the Morristown Centennial Library also turned 100. The residents of that town likewise celebrated with bricks and mortar. Almost a mirror copy of the original Colonial Revival brick building that opened in 1913, the addition to the rear doubles the library’s space. So carefully was the addition designed that its mortar matches the original, and the interior woodwork is stained the same deep red shade of cherry as the original woodwork.

It’s not a coincidence that the Rockingham and Morristown libraries are both turning 100. These architectural gems, each a local cultural highlight, were considered important enough to their communities and significant enough in the history of libraries in Vermont to attract the money and attention necessary to give them new life. Like the free public libraries in Burlington (1904) and Fair Haven (1906), they were gifts from steel magnate Andrew Carnegie.

Carnegie came to the United States from Scotland as a child, and at a time when John D. Rockefeller, Henry Frick and J. P. Morgan gave him stiff competition for the title, made himself into one of the wealthiest men in the world through his ownership of iron foundries and steel manufactories. Carnegie credited books with opening up his future in this country. He provided libraries for his employees even as he quashed their drives to unionize. Carnegie himself wrote one book, “The Gospel of Wealth,” in which he argued that those who had profited handsomely from their business success should live simply and give 90 percent of their fortunes to worthy causes.

Faithful to his gospel, Carnegie spent the last 35 years of his life giving away money as if it were water flowing through his hands. Having amassed a fortune of approximately $500 million ($12 billion in today’s dollars), he founded the Carnegie Endowment for International Peace, the Carnegie Foundation for the Advancement of Teaching, and many other civic projects. He donated organs to 7,000 churches. He also funded free public libraries — large and small — throughout the country.

A trickle of Carnegie’s donations toward the construction of free public libraries made its way into Vermont, where four communities were beneficiaries of his largess. All told, Carnegie spent almost $42 million between 1883 and 1917 to build 1,689 libraries throughout the United States, Hawaii and Puerto Rico. He financed nearly another 1,000 overseas. According to Carnegie, “Building a library outranks any other one thing that a community can do to benefit its people. It is the never-failing spring in the desert.”

“Andrew Carnegie gave libraries as an existential thank you for what libraries had done for him as a kid,” says Robert Resnick, reference librarian for the Carnegie library in Burlington, the Fletcher Free Library. 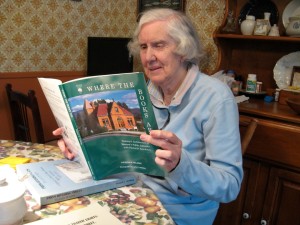 Patricia Belding and her husband, photographer John, provided a great service to the state by compiling a book recounting the history and providing an architectural description of all 201 libraries in Vermont. Vermont has more libraries per capita than any other state. Photograph courtesy of Nancy Price Graff

Even before Carnegie made his gifts, Vermont communities had a long tradition of forming lending libraries. According to Patricia Belding’s comprehensive survey of Vermont libraries, “Where the Books Are,” as early as the 1790s Vermonters formed library societies. But often the collections resided in the homes of prominent citizens; borrowing rights came with dues, and shareholders were restricted to men. The first public libraries appeared in the 1850s and were usually located above stores, in town offices, or in private homes. In 1867 the village of Post Mills in Thetford became the first community in Vermont to set aside a specific building for a public library. Almost 150 years later, this one-room Greek Revival treasure is still open for business. Over the next 40 years, Vermonters built at least 50 more public libraries.

“If there was any excuse for a library, any excuse at all, people tried to get one,” says Belding.

The process of applying for a Carnegie grant to build a library was not complicated, but it came with conditions that many small communities could not or would not meet. That might explain why Vermont has so few Carnegie libraries, while other states in New England -- Massachusetts, for example, has 43 — have at least twice that, and states such as Indiana and California have 164 and 142, respectively. First the board of selectmen or city council had to write to Carnegie and request funds, which were generally figured by population at approximately $2 per person. Then the community had to purchase a site and commit to raising annually in taxes 10 percent of the construction grant to be used to fund upkeep. Above all, the libraries had to be free for the public. 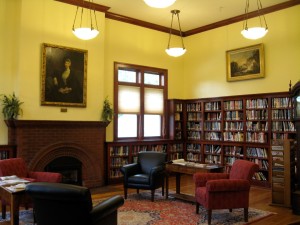 The Morristown Centennial Library has a new addition, but it reflects the soft colors; inviting reading rooms, including a fireplace; and gleaming wood trim of the original interior, seen here. Photograph courtesy of Nancy Price Graff

“In 1909 Bellow Falls was hopping,” says Houlne of the village that made a name for itself producing paper and farm machinery and as a railroad hub. “I can just imagine all those workers who would never have had the resources to go out and buy a book. Now they had access to books.”

“Carnegie libraries set the bar for excellent libraries in small towns,” says Resnick. He points out that in addition to funding substantial masonry libraries that became monuments to literacy in every community where they appeared, Carnegie libraries influenced innovative interior designs. Carnegie insisted that no railings or desks separate patrons from the stacks. Often for the first time patrons were allowed to wander among the books perusing titles. This policy of having open stacks invited more open floor plans.

The essential Carnegie design requirements — big windows, columns, classical architectural allusions, masonry, and open floor plans — distinguish Carnegie libraries across the country. In Vermont there is little else to set them apart. Carnegie’s name is not part of the name of any of the four public libraries he financed. The Fletcher Free Library, the most spectacular of the Carnegie libraries in the state, is named for a mother and a daughter who began working in the 1870s to open a library in that city. Carnegie did not even request that his portrait hang in his libraries, and only Rockingham has one. 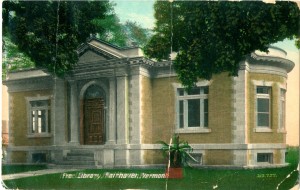 This old postcard showing the exterior of the Fair Haven Free Library captures the distinctive characteristics of Carnegie libraries: columns, large windows, masonry walls, and a generally monumental design, even in a small town. Photograph courtesy of the Vermont Historical Society.

The Carnegie libraries in Vermont were built at a time when there were national movements afoot to support more libraries. In 1894 the Vermont Legislature passed a resolution urging towns to open libraries and promising to send $100 worth of books if they did.

“Women’s clubs were also instrumental,” says Belding, who spent four years and traveled 9,000 miles gathering material for her book. In Morristown, as in many other Vermont communities, women’s clubs took the initiative to organize and supply public libraries with furniture, landscaping, books, and volunteers. Belding adds, “And Old Home Week brought successful people back to Vermont and inspired them to leave a legacy in their hometown.”

“Our library is definitely a community center for the town,” says Carol Scott, director of the Fair Haven Free Library. “Everybody comes to the library.“

Thanks for reporting an error with the story, "In This State: Celebrating Vermont's Carnegie libraries"