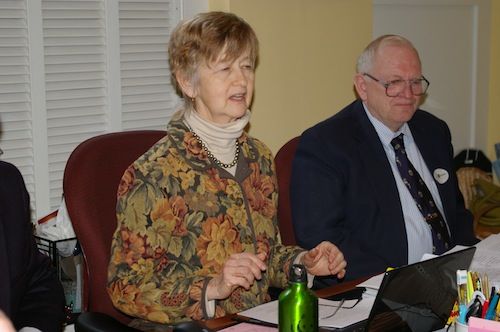 Democratic Rep. Carolyn Partridge, who chairs the House Agriculture Committee, announces the result of the 8-3 vote in favor of the GE labeling bill that she supported. Sitting next to her is Vice Chair Rep. Richard Lawrence, R-Lyndonville, who opposed the legislation. Photo by Andrew Stein

Vermont is one step closer to becoming the first state in the nation to enact a labeling law for genetically engineered foods.

The legislation, H.112, would give consumers access to information about what food products have been genetically modified.

The House Committee on Agriculture and Forest Products voted 8-3 in favor of the bill.

Rep. John Bartholomew, D-Hartland, said after three weeks of “annoyingly contradictory" testimony, the committee was unable to determine whether there are “serious health consequences to these products.”

“We are only able to say there were … some unanswered questions about the safety of these foods,” he said. “A consumer needs to know so that he or she can make an informed decision about what products they are going to buy. If they know it’s in there, and they’re going to buy it, OK.”

The proposed bill defines genetically engineered foods as those created from organisms in which the genetic material has been changed via in vitro nucleic acid techniques or cellular fusion. Foods for sale in the retail marketplace that are produced “entirely or partially” using these methods, must be labeled under the proposed legislation.

Under the legislation, GE foods could not be advertised as: “natural," "naturally made," "naturally grown," "all natural," or use any similar descriptions that "have a tendency to mislead a consumer.”

Dan Barlow, a lobbyist for VBSR, said, “Vermonters have a right to know what’s in their food, and right now GMOs are a threat to the Vermont brand. I think this move can only strengthen the Vermont brand going forward.”

Others have reservations about the bill. Margaret Laggis, who lobbies for the biotech industry, represents the groups Dairy Farmers Working Together and United Dairy Farmers of Vermont.

“Dairy farmers … know that the people who are pushing this consumer right-to-know bill actually want to ban the use of this technology,” she said. “And Vermont farmers have overwhelmingly embraced this technology as the only way for them to raise the quality crops, meet the Vermont quality standards, etcetera, on their farms.”

Rep. Harvey Smith, R-New Haven, who voted against the bill, is one of those farmers.

“For the first time in the last 30 to 40 years, we have some products out there that are really friendly to the environment, friendly to water quality, reduce the use of pesticides, reduce the use of herbicides, and all at the same time they help increase the farmer’s yield and the farmer’s ability to turn a profit,” he said to the committee. “For all of those reasons, I’m very concerned about this.”

Many dairy and livestock products, however, would not be subject to GE labeling, as the legislation exempts “food consisting entirely of or derived entirely from an animal which has not itself been produced with genetic engineering.”

The bill exempts a range of other foods, and Laggis questions the bill’s purpose.

“This bill has an ice cream truck size exemption for probably 60 percent to 70 percent of the foods Vermonters eat because meat, dairy, alcohol are not included, no restaurant foods,” she said. “We kind of feel like this is the largest, state-sponsored, consumer-deception bill we’ve ever seen.”

Falko Schilling, an advocate with Vermont Public Interest Research Group, says the exemptions are similar to proposals now under consideration in 20 other states and laws now in effect in dozens of countries around the world.

“What we’re trying to do is play catch-up with the rest of the world,” he said. “Look at Europe: They don’t require labeling of meat or milk from cows that have been fed GE feed. It’s also the language that’s been incorporated in the Washington initiative and in a number of states across the country, so (the committee) is just trying to be as consistent as possible.”

The bill, Schilling said, is based on Proposition 37, the California labeling law that was defeated by voters last November.

But before that day arrives, the legislation is likely to hit a legal hurdle.

That’s why the law includes a severability clause. If any part of the legislation violates the Vermont or U.S. constitutions, “the violation shall not affect other provisions” of the law.

Seven Days reporter Katie Flagg reported earlier this week that leading advocates of the bill and Democratic Rep. Carolyn Partridge, who chairs the Agriculture Committee, anticipate a lawsuit. Partridge is a strong supporter of the legislation.

“I’m not intimidated at all,” she told Flagg.

Thanks for reporting an error with the story, "House committee backs labeling law for genetically modified foods"